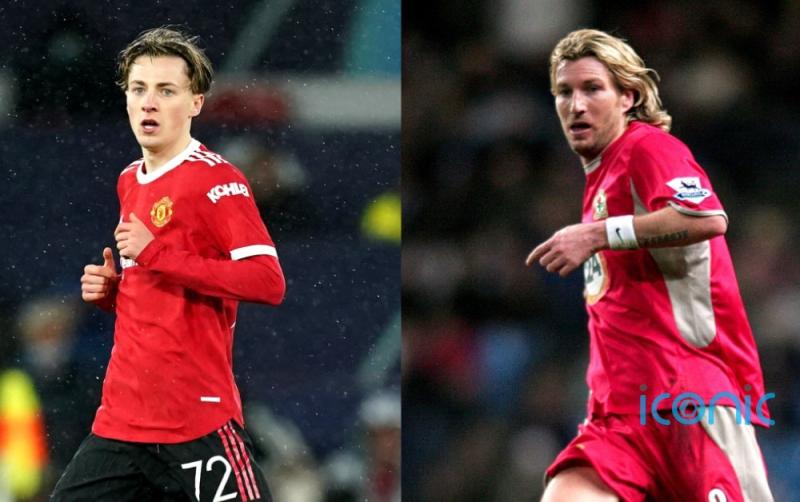 Charlie Savage made his debut for Manchester United on Wednesday, following his father Robbie into the professional game as he came on as a late substitute against Young Boys in the Champions League at Old Trafford.

Robbie Savage, who was also on the books at United as a youngster, played for Wales and in the top flight with clubs including Leicester, Birmingham and Blackburn.

Here, we look at some other father and sons to have played professionally.

Two of the Premier League’s greatest goalkeepers have hailed from one Danish family. Peter was a giant figure – literally and metaphorically – in Manchester United’s successes of the 1990s, providing the bedrock for five title wins and their 1999 Champions League victory, among other trophy triumphs. He also won the European Championship with Denmark in 1992. Kasper’s career began in his father’s shadow. He failed to make the grade at Manchester City, where he faced competition from Joe Hart, and was sent out on a series of loans. Things changed after he joined Leicester in 2011 and he has been a mainstay of the Foxes side since. Also Denmark’s number one, he won the Premier League in 2016 and FA Cup last season.

It is remarkable to think that Frank junior, Chelsea’s all-time record goalscorer and owner of 106 England caps, faced accusations as a youngster breaking through at West Ham that his place in the side owed more to his family connections. Frank senior made more than 550 appearances for the Hammers as a left-back, winning the FA Cup twice in a career that spanned almost two decades. He was assistant manager to his brother-in-law Harry Redknapp when Frank junior came through the ranks. Frank junior went on to surpass his father’s achievements but it was after moving to Chelsea in 2001 that his career took off. He won three Premier Leagues, the Champions League and four FA Cups with the Blues.

Johan Cruyff, the Dutch maestro, was one of the game’s all-time greats. A nimble and skilful forward, Cruyff was the crown jewel in a thrilling Holland side that redefined the game with its dynamic ‘Total Football’ in the 1970s, when they reached two World Cup finals. Cruyff was also an inspirational figure at Ajax and Barcelona. His son Jordi could not match his father’s stellar achievements but still had a decent career, also playing for Holland and Barcelona as well as United and other clubs including Alaves and Espanyol.

Brian Clough may be celebrated as one of the English game’s greatest managers but he also had a brilliant playing career before being forced to retire through injury at the age of just 29. A prolific striker who earned two England caps, he scored 204 goals in 222 games for hometown Middlesbrough before adding another 63 in 74 appearances for Sunderland. Son Nigel was also a forward who emerged under Brian’s guidance at Nottingham Forest. He scored 131 goals in 403 in two spells with Forest while he also had stints with Liverpool and Manchester City and earned 14 England caps.

After a controversial move from West Ham, Paul Ince emerged as a midfielder of some stature in the early years of Sir Alex Ferguson’s glittering reign at Manchester United. He helped the club to their first two Premier League titles before being sold to Inter Milan and later playing for Liverpool, Middlesbrough and Wolves. He earned 53 England caps. Son Tom is a more attacking player currently plying his trade in the Championship with Stoke. He was in the youth ranks at Liverpool and was later linked with the a return to the Merseyside club after a promising spell at Blackpool but neither that, nor other touted moves to clubs such as Inter or Monaco, transpired. Has spent most of his career at Championship level but there were top-flight spells with Crystal Palace, Hull and Huddersfield.