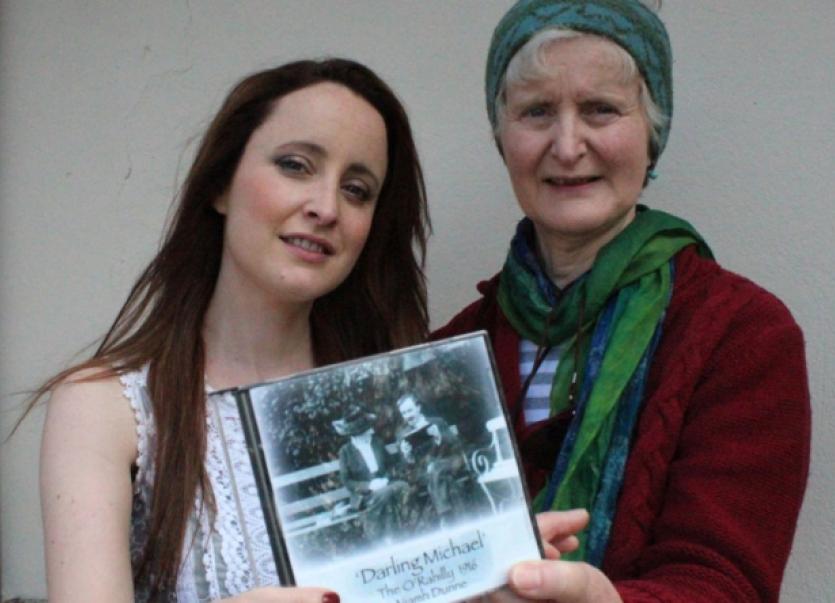 A LADY from Caherconlish has written a song commemorating her grandfather - a key figure in the 1916 rising - and the woman he left behind.

Aideen O’Rahilly, who is married to renowned Limerick piper Mickey Dunne, is the granddaughter of Michael O’Rahilly - known as The O’Rahilly. He was shot on Moore Street five days into The Rising and in his dying hours wrote a short letter of farewell to his wife Nancy. The letter is preserved, along with bullet holes, in some of the significant 1916 memorabilia.

When he left their home in Dublin to join The Rising, he and Nancy had four young sons and she was pregnant with their fifth. Nancy received a letter every day of Easter week from her husband in the GPO. They all expressed his deep love for Nancy - Tuesday’s note ends, “Thousands of kisses dearie and lots of love from your own Ua R”.

Five days into the Rising, The O’Rahilly was shot leading a group of volunteers out of the GPO. He later died in a side lane, now known as O’Rahilly Parade. While dying he wrote his final words to his beloved Nancy.

Aideen wrote Darling Michael and it is recorded by her daughter Niamh Dunne - a well known singer, musician and member of the internationally renowned traditional band Beoga.

Aideen said it was always in her head to do it from growing up in the family, hearing about 1916 and seeing her grandmother regularly.

“I just felt that she was the one literally left holding the baby because she was actually expecting their fifth child, well actually it was their sixth because the eldest one died.”

“She was the one who carried on after he did the brave thing and went out with the volunteers. She was the one left really, which I thought was just so sad hearing that. She was a great lady, she brought up her sons - all lovely men. And it must have been very difficult for her, an American over in Ireland, to do all that. I was surprised that she didn’t go back to America.

“In a way, the question is: should he have gone into the GPO with his wife expecting and the four boys and think nothing is going to happen? I just thought that I’m going to put her name out there, Mná na hÉireann,” said Aideen.

Her dad, Neil, can actually remember his father going off and it “being horrendous”.

Nancy, from Philadelphia, met The O’Rahilly at a party in North Kerry in 1893 when she was on holidays with her mother and sisters. He was 18 and she 17. It was love at first sight.

Aideen came to Limerick as a teacher when the Mid-West School for the Deaf, and like her grandmother it was love that made her stay.

She was adopted by Neil and Bridie O’Rahilly when she was a baby.

“I was very blessed, it could not have been better. I had a great childhood. We were brought up listening to all of these stories. They argued about them more than telling the story if you know what I mean, about the politics of it. It was very interesting and we’d have various people come to the house, people who were involved. It made for interesting listening,” said Aideen.

She didn’t forget and that can be heard in the song, It was uploaded onto YouTube by Shane Serrano and just search for Darling Michael to hear it.

Aideen made some CDs for friends and radio stations. She is not selling them but she is a member of Garryowen Comhaltas and they are very keen on doing something with it for next year. She also plays with Crinniu Music Group in UL so there is plenty of scope for Darling Michael to be part of the 1916 anniversary in Limerick.