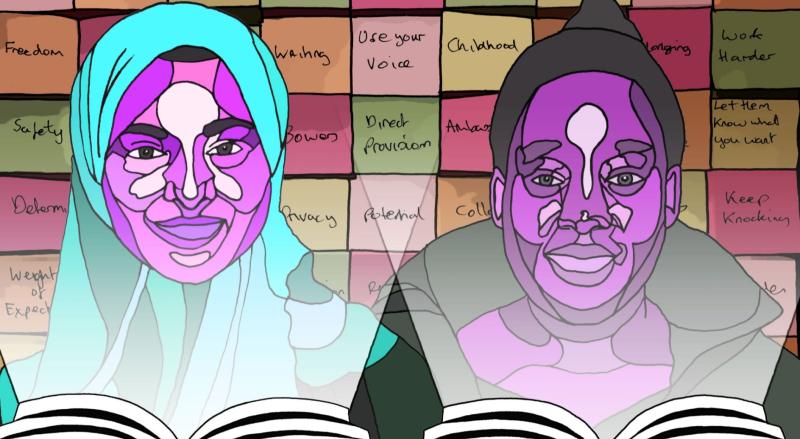 This timely event followed Herstory’s successful campaign to make Brigid’s Day Ireland’s new public holiday from 2023, a celebration of our Celtic Goddess, Matron Saint, and Imbolc, and the ancient festival of Spring.
This is the first public holiday named in honour of a woman and high time as Ireland already has 4 holidays named after men: Jesus, Patrick and Stephen. What a victory for all mná!
Herstory and the Irish Second-Level Students’ Union (ISSU) chose “ STUDENT POWER’ as the theme of their collaboration. The spectacular #Herstory Light Show aimed to amplify #StudentVoices and spotlight the causes close to their hearts: climate action, girl’s education, mental health, racism, migrants rights, preserving indigenous cultures and more.
Speaking on SPIN South West, Herstory CEO & Creative Director Melanie Lynch said: “Never before in history have young people risen up together on this scale across the world. Power to students as they lead the light,”
“St. Brigid was a spirited youth activist, feminist and environmentalist who fearlessly championed the rights of the poor and animals. She has inspired the graphic design students from the National College of Art and Design who have created new portraits of 30 young visionary change-makers which will be illuminated on iconic landmarks in Dublin city.’
Saoirse Exton, ISSU Equality Officer commented: “Student voice is the key to creating a better world for all and pulling down outdated systems that threaten our very existence on this planet. Young people are the leaders, educators, lawyers, factory-workers, programmers, artists, legislators and so many other things, of the future and by right of our existence we must voice our concerns and the specific issues that affect us. By celebrating those that came before and continue to work towards dismantling the system and creating a better world, we are creating spaces for the activists of tomorrow and inviting more young people to join every fight - from climate to reproductive justice.”
You can read students’ awe-inspiring stories on the Herstory website. Irish Rail will also showcase the activists’ portraits on the big screens in Dublin’s Connolly, Tara, Pearse and Heuston stations from February 1-14. All events are part of the Brigit 2022 Festival and are free and open to the public.

The Staves
March 23, Dolan’s, Limerick.
UK folk/pop sibling group return to Ireland with their spine-tingling harmonies for a quick tour this spring!

Sam Fender
March 24 3Arena, Dublin
Top of my playlist! UK – old-school pop/rock! Catch him while you can, massive year incoming for SF.

TO DO
SPRING IS HERE!
Take a long spring-y walk in nature. It's good for the soul.

TO SEE
EUROVISION 22- IRISH SONG SELECTION!
It’s been a few years since the Irish public have had any input!
This Friday Feb 4 The Late Late Show will host a Eurovision special to select the artist and song for Eurovision 2022.