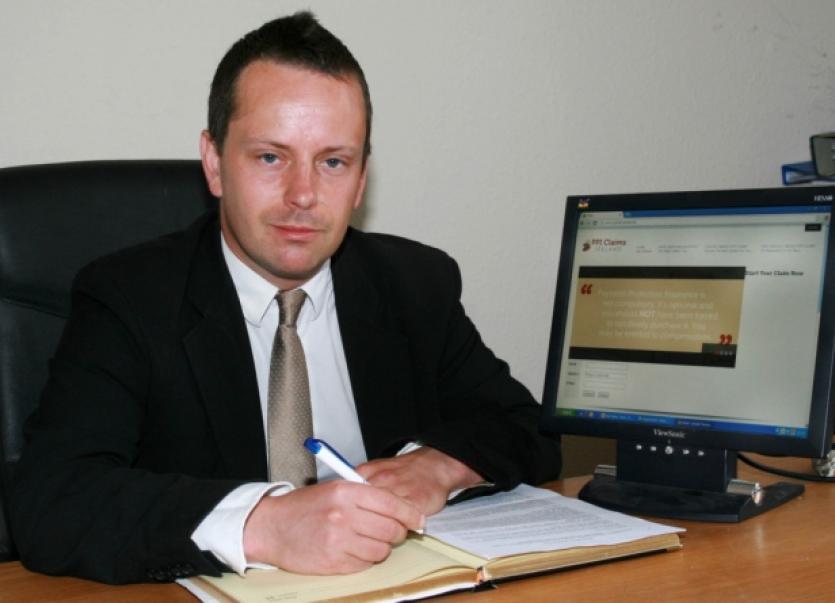 A LIMERICK city lawyer is aiming to capitalise on the expected upsurge in customers taking legal action against banks which have mis-sold PPI schemes.

A LIMERICK city lawyer is aiming to capitalise on the expected upsurge in customers taking legal action against banks which have mis-sold PPI schemes.

Brian Moloney, who hails from the North Circular Road, but practices in O’Curry Street, has set up a web site - ppiclaimsireland.ie- and he hopes to give customers across the Mid-West access to a one-stop service when trying to recoup losses from the big banks.

Payment Protection Insurance (PPI) is a type of insurance cover which repays your loan, mortgage of credit card should you lose your job, have an accident or die.

But during the boom years, thousands of policies were sold to people who could never realistically make claims on them.

With test cases pending against major banks, Mr Moloney has chosen to specialise in this field in a bid to help customers who may have been left thousands out of pocket.

He said some people are forking out over €7,000 per annum extra for the scheme, having signed up when the economic climate was more favourable.

“There was so much money in the market, they did not put much thought into it, and they relied on financial institutions to tell them the product was not appropriate,” he said, pointing out this often did not happen.

Many people have found they cannot make claims on the scheme, as they were self employed.

Mr Moloney says one of his clients was even told, after redundancy, that he could not make a claim on his PPI, because he was still alive.

“One guy that I took on had been made redundant and tried to make a claim, but was told he wasn’t covered. He was told he could not claim, which is complete nonsense,” he said, “This guy had a valid claim, but he was fobbed off.”

“When you are down on your luck financially, and you find out that you are unable to claim, it is particularly galling,” he said.

He believes the extent of the problems with mis-sold PPI schemes has yet to be revealed.

“It may be quite endemic, but we don’t know yet, because the banks are claiming the problem is nothing like the UK. But when it broke in the UK, all the banks said the exact same thing,” he concluded.