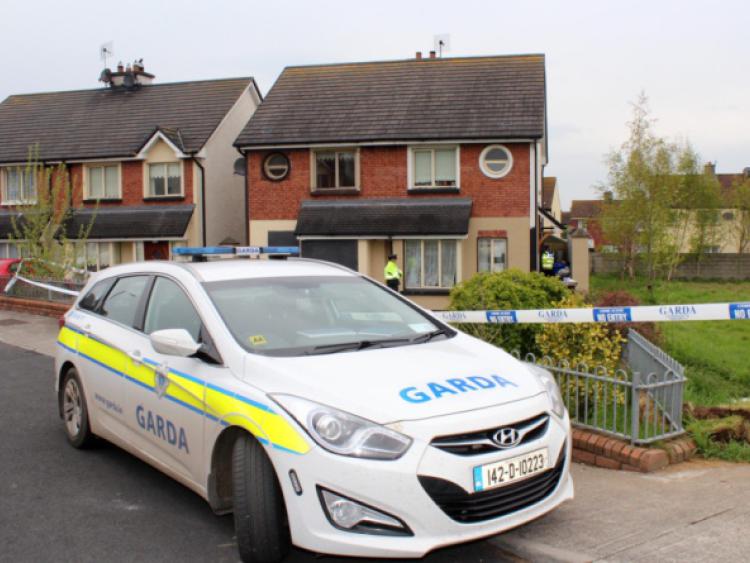 LIMERICK LEADER reporter Donal O’Regan reports from the scene in Pallasgreen, 16 miles from Limerick city, where a man was stabbed to death last night.

LIMERICK LEADER reporter Donal O’Regan reports from the scene in Pallasgreen, 16 miles from Limerick city, where a man was stabbed to death last night.

TWO gardai stand in the rain outside the house in Pallasgreen, where a man was pronounced dead late last night after suffering an apparent stab wound.

The Grove is a council estate of around 20 houses built eight years ago at the back of the GAA pitch. The body of the deceased Limerick city man, aged 30, remains inside the semi-detached house. The State pathologist has been contacted and is due to arrive later on today.

Two arrests have been made by gardai. Shortly after 11pm they were alerted to the discovery of a man who they believe was stabbed. He was pronounced dead at the scene. A woman, aged 34, was taken to University Hospital Limerick with an apparent stab wound. Her injuries are described as non-life threatening.

Two men, aged 20 and 32, were arrested in connection with this investigation and are currently being detained at Henry Street and Roxboro Road garda stations under Section 4 of the Criminal Justice Act, 1984.

Neighbours, speaking this Friday morning, are shocked that a man was killed on their doorsteps.

“I was in watching a film on TV last night. The first inkling I got that something was wrong was when I saw the lights of ambulances - there was three or four of them - and a lot of police cars. Then more and more people started coming out of their houses. It is a very peaceful estate. There is hardly ever any trouble,” said one neighbour.

Another living locally knew the victim to see.

“I never spoke to him but he would always salute me. He has been coming to the estate for about the last four months,” she said.

“I can’t believe this is after happening here. My head is bursting. It is unbelievable,” she added.

The Limerick Leader understands that the person who lived in the council house, the victim and the two men, who were arrested, are all from Limerick city.

A neighbour said there was always people “coming and going” into the house and parties were a common occurrence. The semi-detached house beside it is boarded up. There is only one other house in The Grove that is unoccupied.

The majority of the houses have neat, well tended front gardens but outside the house where the stabbing occurred - the grass is long and there is a broken bike.

It is believed that there was about eight people in the property at the time of the fatality.

“I got a phone call last night that there was a murder. I hadn’t heard any noise or anything. I have three children who were then woken up by the commotion. My youngest was so upset that she wanted me to sleep in the bed with her last night. It took me ages to get to sleep. She didn’t want to go to school today,” said the neighbour.

She said a number of people spilled out of the house where the incident occurred.

“Everyone in the estate was out watching it. I saw a fellow being arrested and he was put in a patrol car. It is just crazy,” she said. Others didn’t want to comment when reporters called to their doors.

Gardaí are appealing for witnesses or anyone with information to contact Bruff garda station on 061 382940, the garda confidential line on 1800-666111 or any garda station.