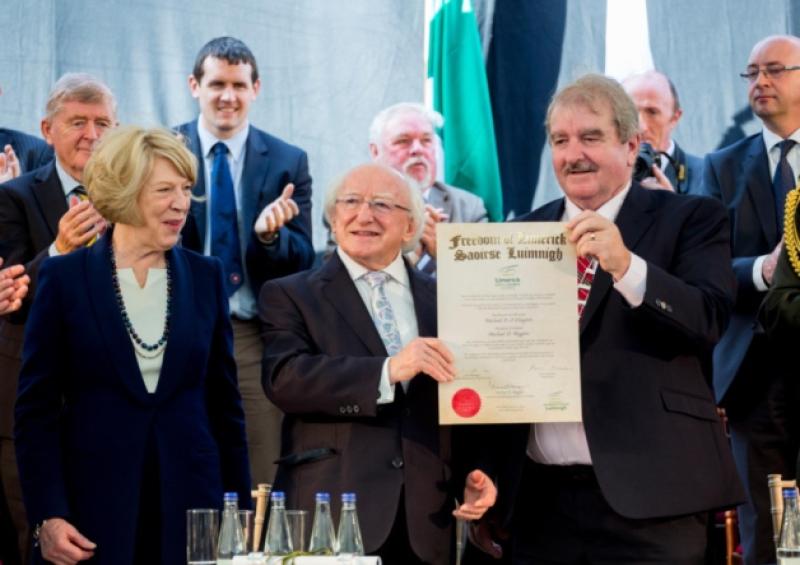 PRESIDENT Michael D Higgins has become the first person awarded the honour of Freedom of Limerick following the merger of the local authority.

PRESIDENT Michael D Higgins has become the first person awarded the honour of Freedom of Limerick following the merger of the local authority.

President Higgins received the honour in front of almost 1000 people at the Milk Market this Monday. The title of Honorary Freeman of Limerick is a new one and the President is the first recipient following the formal establishment of Limerick City and County Council in June.

Accepting the award, President Higgins - who was born in Limerick - said it was a “great honour” to be bestowed as the first freeman of Limerick city and county.

“I am reminded here today of the many great Limerick civic leaders over the years – not least my friend and colleague Jim Kemmy who represented the people of Limerick, and especially the working people of this city with such passion and commitment for so many years,” he said.

“This is a very special day for me as President of Ireland and for me as a Limerick man,” he said in his speech.

“As is well-known, I spent much of my childhood a few miles west of the Shannon in County Clare, and much of my adult life in Galway, but I was born here in this beautiful place, the Treaty City, and I was baptised in St. Munchin’s Church.”

”We are privileged to bestow on you the Freedom of Limerick, the highest honour that Limerick City and County Council can bestow on any one individual, group or organisation,” Cllr Sheahan said.

“Today you become the first person to be conferred with the Freedom of Limerick under the newly merged local authority. It is fitting that you receive this honour during Limerick National City of Culture 2014 of which you are patron.

“Here in Limerick we are proud to call you one of our own. Your deep affection and in depth knowledge of Irish arts and culture is well known at home and abroad and therefore it is only fitting that your native city and county honours your contribution.”

The ceremony was followed by a musical performance from composer Micheál Ó’Súilleabháin, director of the Irish World Academy in UL.

- For more on this story, see tomorrow’s Limerick Chronicle and the print edition of the Limerick Leader on Thursday