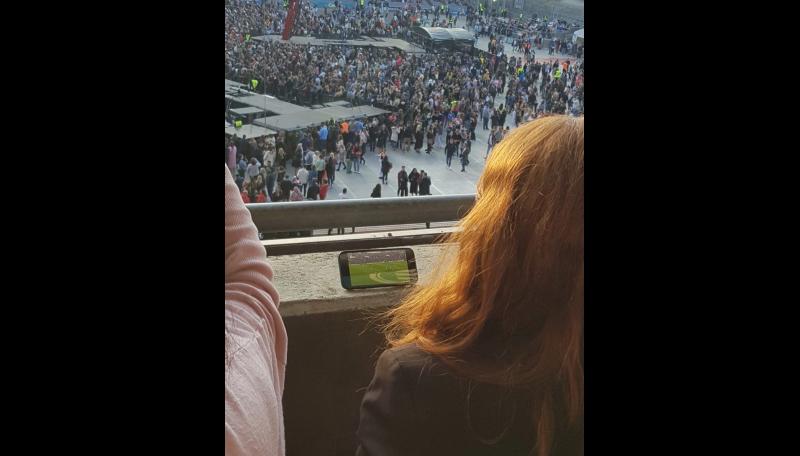 THE STORY of why a woman was watching a Limerick hurling game on her phone at Ed Sheeran’s concert in Croke Park warmed many a heart on national radio.

Speaking on Today with Claire Byrne, the woman from the photograph, Grainne Fennell, told listeners of the bet she made to her “Limerick hurling mad” father who passed away last year.

Born to Limerick parents, she told of how her father missed the 1980 All-Ireland Hurling Final vs Galway as he had to rush his wife to the hospital, so that she could give birth to Grainne.

“Eventually Limerick lost. For the next 37 years, instead of a happy birthday, each year, he would get me something to say, this day, so many years ago, Limerick lost the All-Ireland Hurling Final.

In 2018, they had a chance to re-write history, after her father informed her that he had two tickets for the All-Ireland Hurling Final in Croke Park.

He warned her that this was it, if Limerick lose, you are done for and will be totally disowned. Off the two of them went.

“Nine minutes of added time, two Galway goals, I still get palpitations thinking about it,” she said.

After the final whistle, her father got a bit emotional, having waited 45 years for the Liam MacCarthy Cup to return home. He hugged her and let her know “all is forgiven.”

Fast forward two years, and the pair were watching the 2020 All-Ireland Final via phone link, as her father was outside her 5km, during the lockdown.

“Unfortunately, in 2021, Dad became ill. He was diagnosed with lung and liver cancer,” she explained.

Originally promising to be treatable, her uncle secured tickets but due to the aggressiveness of the cancer, her father was unable to go. The family decided to stay home and watch the game together.

“It was the last game he would see, them winning the All-Ireland,” she said, adding that he passed a few weeks later, on October 11.

His one wish, Grainne stated, was to be at home when he passed. Her mum, “the strongest person” she knows, made sure that happened. He was surrounded by loving family in his final hours.

Wanting to cheer the family up following a tough year, her uncle Bob bought tickets to Ed Sheeran in Croke Park.

Bob, Grainne, her two daughters, her mam, sister and niece, all went along to the gig. “In fairness, the tickets were bought before the fixtures were released,” she conceded.

Grainne watched the match while seated during the Ed Sheeran show, while her uncle Bob listened to the commentary on the radio. “Between the pair of us, we managed to piece it together.”

The woman sitting in front of my daughter-in-law at #EdSheeran concert is watching the Hurling on her phone!! #LIMvWAT - That’s what Croke Park is for… watching Matches!! pic.twitter.com/5qmB5pNTrb

“The Limerick matches became me and Dad’s thing. For me going back on Saturday night, they were the memories I was carrying with me. I had to watch the match and see what was happening.

“That was my connection to him going back into Croke Park that first time,” she said.

One of the last conversations with him, she recalls, was placing a bet on how many All-Ireland’s in a row the Limerick hurlers could achieve.

“I’ll do you a deal Dad,” she said at the time. “They can do three in a row for you and four in a row for me, so there’s no pressure on the lads whatsoever.”