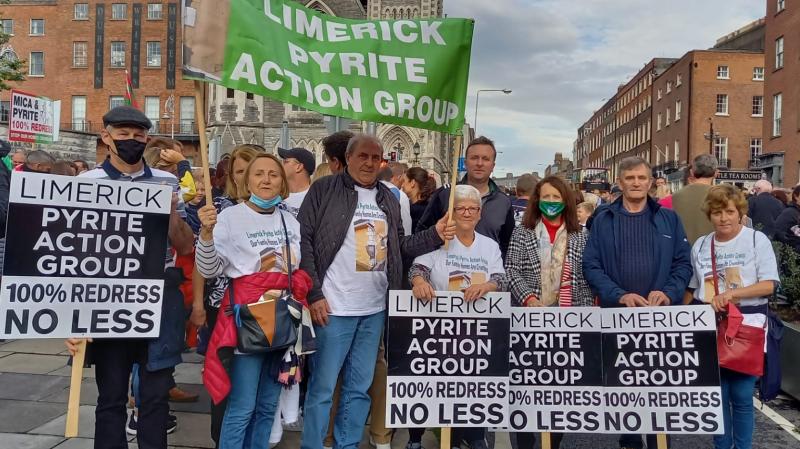 IT is likely to be several months yet before Limerick householders affected by pyrite or mica find out whether they are eligible for redress.

It is not clear either whether the government’s new Mica Redress Scheme, announced this Tuesday afternoon, will cover the defective homes in Limerick and Clare, although the hope is that they will.

Samples have been taken at five selected homes in different parts of Limerick within the last few weeks as part of a submission being prepared by Limerick City and County Council, according to Ann Ryan, chairperson of the Limerick Pyrite Action Group.

Some eight samples per house were taken and sent to England for analysis, she said, but  it could be March next year before definitive reports on the Limerick homes are ready and can be submitted for inclusion in the government’s redress scheme.

“It is only the first step on a very, very long road,” Ms Ryan said.

There was no specific mention of Limerick when the new redress scheme was announced this Tuesday, presumably because the council's submission has not yet been received.

The demolition and rebuild scheme, announced by Housing Minister Darragh O’Brien, will pay out €145 per square foot for the first 1,000 square feet of new build with a sliding scale after that, up to a maximum of €420,000 per house. An allowance for storage and alternative accommodation of €20,000 is also available.

But campaigners in Donegal, which has the biggest proportion of mica-affected home. say that the “devil is in the detail”. They are concerned that what they call the double-cap will mean that some householders will have to front up some of their own costs.

Since the Limerick Pyrite Action Group was set up earlier this year,  as many as 26 householders have come forward in Limerick,  concerned that their homes have been built on defective foundations or with defective blocks.