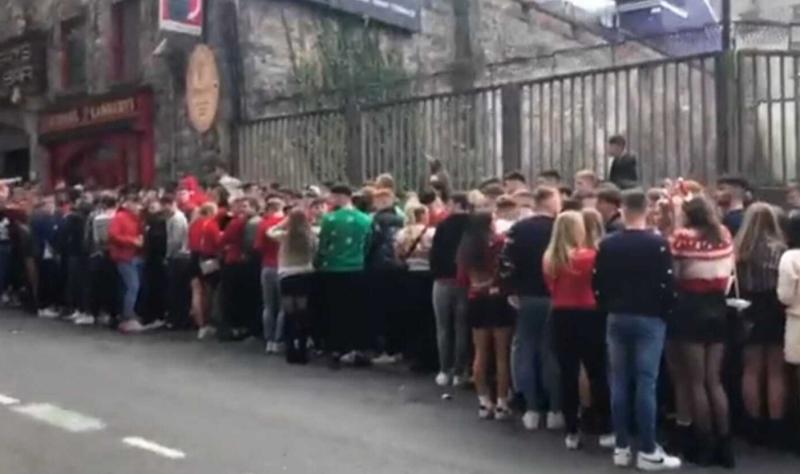 In response to queries from the Limerick Leader, gardai confirmed that three people were arrested for public order offences.

"All have all been released without charge, with one receiving an adult caution while another received an on the spot fine," said a garda spokesperson.

Videos were circulated widely on social media from early on Wednesday afternoon showing snaking queues - some with up to seven people abreast - outside several licensed premises in the city centre.

The garda spokesperson said that a number of proactive patrols were launched in the city on Wednesday "as part of local policing plans".

Concerned residents and pedestrians in Limerick city voiced their anger on national and local radio today, at the scenes they witnessed as early as 2pm on Wednesday afternoon.

One city pedestrian, Annette, told Joe Duffy’s Liveline how she witnessed elderly individuals who were unable to walk up the street due to hundreds of students coming towards them.

She also said that two of these students started urinating in the street in front of the elderly ladies.

“It was desperate, absolutely desperate. It was just mayhem. We need to control it," she said.

“There has to be a way we can sort something so that they are not drinking at 12pm in the day and frightening the life out of people at 5.15pm in the evening,” she added.

Another caller said: “Sheep held in a pen would have more space than they had getting into this club."

Student Conor Brennan told Liveline on RTÉ Radio 1 that “in spite of the large numbers in Limerick last night, the majority of students are abiding by public health guidelines, and this should not tar our image.”

Nightclubs around the country have announced new opening hours on social media in recent days after An Taoiseach Micheal Martin announced that from this Thursday night all nightclubs, pubs and late night venues will have to shut their doors at 12am.

One Limerick club is now set to open at 8pm this Friday and Saturday night to allow punters get a full four hours in on the dance floor before the midnight closing time.

The gardai say they will "continue to provide ongoing support to the Government response to the Covid-19 pandemic and to business and society through our normal daily policing functions where required".

Gardai say they continue to appeal to all citizens to comply with public health guidelines and regulations in order to continue to save lives.