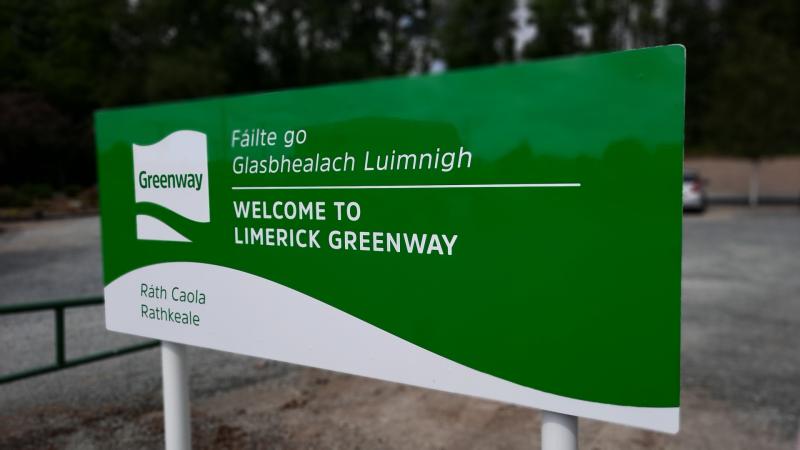 PLANS to create a greenway hub at Rathkeale were unveiled to local councillors at their monthly meeting earlier this week.

The plans, drawn up by McMahon & Co Architects, will see the old, and now derelict, railway goods shed,  transformed to house  an information office, a coffee dock, public toilets and a bike storage and bike  hire centre.

The stone-cut building  will be reroofed and the original overhang or awning restored to become a covered colonnade with seating and tables.

The area in front of the shed will become a dedicated, landscaped public plaza with seating, and will be bounded by the Irish Palatine Museum which is housed in the original Rathkeale station house.

The car park will be resurfaced and marked with a new, single entrance,  a set-down area for buses and coaches and charging points for cars and bikes put in place.

Outlining the plans to the Adare Rathkeale councillors, architect Declan Feeney said the hub also had the potential for a series of loops around the town of Rathkeale.

“I am overjoyed with the presentation here today,” municipal district chairman, Kevin Sheahan said.  “This is the type of product that draws tourists, Irish tourists and tourists from outside Ireland.”

The project, he said, was akin to “an explosion for the tourism prospects of Rathkeale” and he hoped that sufficient numbers of people in Rathkeale would respond to the opportunity and create other tourism attractions. He suggested to the architects that a restored passenger carriage and a restored goods carriage could be included in the project.

“It is going to be a key economic driver going forward,” Cllr Adam Teskey said. “The people of Rathkeale are certainly going to welcome this.”

He asked, however,  that something be done at the cross at Castlematrix.

“It is an amazing amenity,” Cllr Bridie Collins said. But she queried whether the number of car parking spaces was sufficient given the high number of people using the greenway especially at weekends. But director of services Gordon Daly said discussions had been held with the owners of the Rathkeale House Hotel who were making their carpark available.

Cllr John O’Donoghue was told there was no provision in the plan for camper vans. Rather, there will  be a barrier to prevent taller vehicles access to the car park.

The plans are expected to be ready for submission and to move on to the next stage within a fortnight. €200,000 had been allocated to the project under the Town and Village Renewal Scheme but, Mr Daly told councillors,  it would cost more than that.  However, he stressed it was a “priority project”.

“We hope to replicate it in Newcastle West and Abbeyfeale,” he said. Funding was also being sought to cover the costs of the carpark.

Earlier, Cllr Kevin Sheahan had asked for a draft proposal to be brought forward on how the greenway could be linked to Foynes, Askeaton and Curraghchase.

“Askeaton is the oldest town in Limerick. Foynes is already an established tourist destination. Curraghchase speaks for itself. They should not be ignored,” he said.

Cllr Stephen Keary said that the new motorway from Adare to Foynes provided a “golden opportunity” to run links in parallel and would be cost effective.. It was also an ideal opportunity to link Rathkeale to Adare.