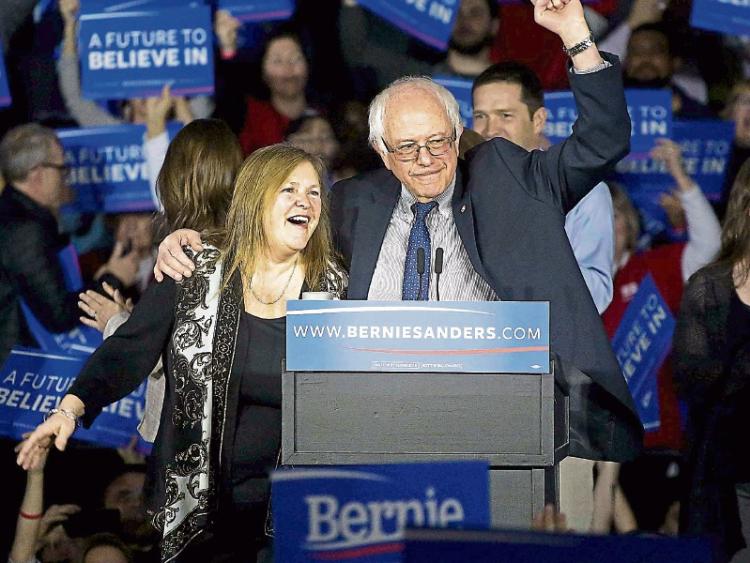 DOCTOR Jane O’Meara Sanders – the wife and senior political advisor of former US presidential candidate, Senator Bernie Sanders – is to attend a new festival in Limerick celebrating the relationship between Ireland and New York.

“I.NY is about the personal and individual stories that create this enormous relationship between Ireland and New York,” said festival director David O’Donovan.

“It’s from a fascination with and love for both the history and modernity of the Ireland-New York relationship that I.NY is built.

“The intention is to uncover the stories that are the fabric of that relationship, to tell them to a wide audience, encourage that audience to share their own, and once a year, through these stories, bring that relationship to life in an Irish city,” he added.

Mr O’Donovan said Dr Sanders’ “story is fascinating” and that festival organisers are “delighted she’s coming, as we are to welcome all the artists and speakers and participants who have responded so positively to the idea and to the invitation.”

Developed over a two-year period, the ambition is that the project will become a key place of exchange and engagement between Irish and New York audiences and communities.

Marian Leydon of Fáilte Ireland said they are delighted to support the festival in its inaugural year.

The I.NY festival, which will run for 11 days next month, is supported Failte Ireland, Creative Ireland, Limerick City and County Council and the JP McManus Benevolent Fund.

Dr O’Meara Sanders is appearing as part of the I.NY Annie Moore Talks series. She will be in conversation with Joseph O’Connor, the award-winning novelist and Frank McCourt Chair of Creative Writing at the University of Limerick.

On the night, she will discuss the 2016 US Presidential election, the Sanders campaign and Institute, and the current political climate in America, as well as her own Irish heritage, and upbringing in 1950s Brooklyn in an Irish-American home.

The event takes place in the University Concert Hall on Thursday, October 12.

On Wednesday, October 11, Joseph O'Connor will join Glen Hansard at The Lime Tree Theatre to discuss the impact that New York has had on their personal, professional and creative lives.

They will also perform the songs and readings which reflect that influence.

See www.thisisiny.com for the full festival line-up and booking details.