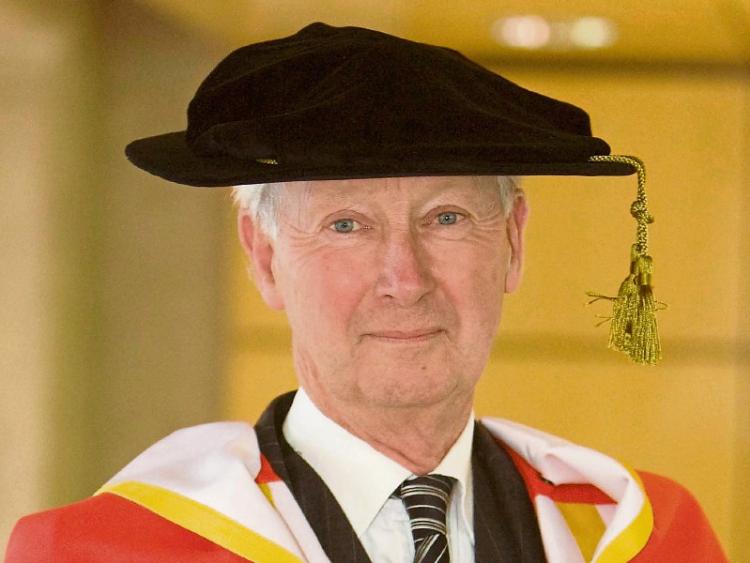 THE founding president of the University of Limerick this week confirmed he will send the honorary doctorate back in the post to the National University of Ireland, after failing to receive a formal response from them.

Dr Edward Walsh said he was “surprised” that he has not received a reply in writing from the Chancellor of the NUI, Dr Maurice Manning, after he wrote to him nearly a fortnight ago, stating it was his intention to rescind the honour, in protest over former Taoiseach Brian Cowen receiving the same accolade.

“I am definitely sending it back,” Dr Walsh told the Limerick Leader.

Dr Walsh, who led UL for 28 years from its infancy, said he regards Dr Manning as “a good friend, an excellent gentleman and a very fine person.”

“I am just sorry that he is probably embarrassed by the position he finds myself in,” he added.

He said he intends to send a letter along with the parchment in the post, noting that it be should be put on the record the circumstances surrounding its return.

In particular, he will highlight that its return is “in protest against the award to a gentleman I consider to be totally unworthy of it.”

Dr Manning declined to debate the issue with Dr Walsh in a recent Sean O'Rourke show on RTE Radio One.

In a separate segment, Dr Manning said Dr Walsh’s request “is a first.”

“Nobody else has given their degree back and we don’t have any protocol for it. He can send them back to us and we’ll keep them in a safe place if he changes his mind.

Dr Manning said while they can “remove his name from the roll [of recipients], we can’t un-doctor a doctor.”

He added that any time future editions of the roll are printed Dr Walsh’s name won’t be included, if that continues to be his request.

Dr Manning rejected suggestions that the NUI acted imprudently in honouring Mr Cowen, and said it was offered out of respect of the office held, “but it wasn’t waved through on the nod” and was debated.

“There were many good reasons to give an honorary doctorate to Mr Cowen,” he said.

Dr Manning said that he found some of the comments that Mr Cowen and his family had to endure on social media to be “pretty vile”.

“I feel I am sort of responsible for that as well,” he said, adding that the reaction was possibly “inevitable”.

Fianna Fail deputy Niall Collins said the controversy, in the first instance, over the honour to Mr Cowen, and with “Dr Walsh subsequently throwing his toys out of the pram is far removed from the realities of most people’s everyday struggles.”

Dr Walsh said that the honorary doctorate bestowed upon Mr Cowen was a “monumental faux pas”, which left him “amazed and dumbfounded”.

He said he has been “inundated” with letters of support since he made his announcement last week.

A recipient of five honorary doctorates, with “another earned through very hard labour” from Iowa State University, he said the NUI “very kindly” bestowed one upon him following his retirement from UL in 1998.

He said that “in hindsight” the decision to award an honorary doctorate to former Taoiseach Bertie Ahern by NUI Maynooth in 2006 was also a mistake. “At the time, I wouldn’t have faulted the NUI for doing it. It appeared appropriate and reasonable then, but it wasn’t. But in the case of Brian Cowen, it was an expression of very poor judgement and what motivated it, I don’t know, whether it was political or otherwise. The fault lies with the NUI for this embarrassment and it raises questions about the quality of governance.”