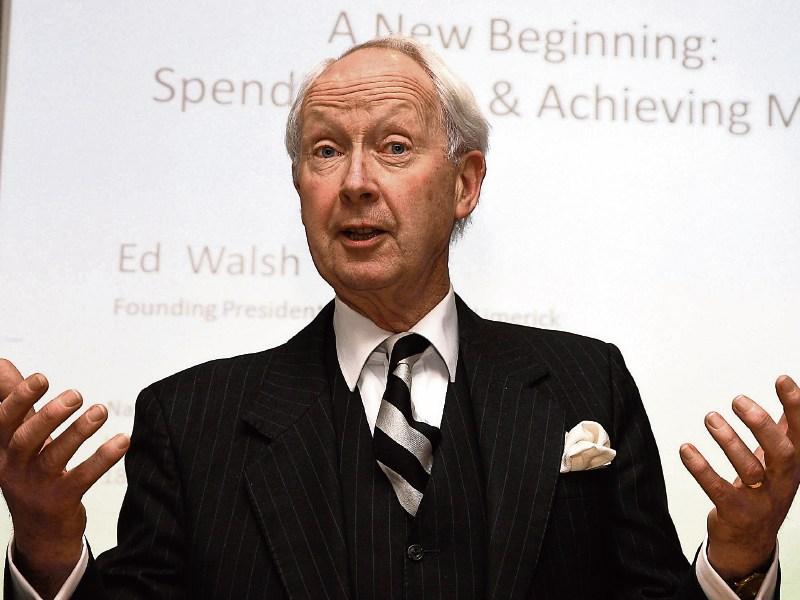 Dr Edward Walsh said that the honorary doctorate bestowed upon Mr Cowen, which has attracted widespread public criticism, was a “monumental faux pas” on behalf of the National University of Ireland

THE founding president of the University of Limerick said he has been “inundated” with letters of support since he announced his intention to hand back his honorary doctorate in protest over former Taoiseach Brian Cowen receiving the same honour.

Dr Edward Walsh said that the honorary doctorate bestowed upon Mr Cowen, which has attracted widespread public criticism, was a “monumental faux pas” on behalf of the National University of Ireland (NUI).

Dr Walsh said he is waiting a response from the Chancellor of the NUI, Dr Maurice Manning, whom he has written to, outlining how he can proceed in handing back the award, which was “very kindly” given to him upon his retirement in 1998.

Asked if there will be any ceremony for the return of the same award or a photo opportunity, he laughed and said: “I doubt it. I don’t know if there’s any precedence for this.”

He said that the decision to award an honorary doctorate to former Taoiseach Bertie Ahern by NUI Maynooth in 2006 was also a mistake.

“In hindsight, it was, yes. But at the time he received it, he had played a very important part in the Anglo-Irish arena, and it appeared that the economy was doing very well, when, in fact, it wasn’t. At the time, I wouldn’t have faulted the NUI for doing it. It appeared appropriate and reasonable then, but it wasn’t.

“But in the case of Brian Cowen, it was an expression of very poor judgement and what motivated it, I don’t know, whether it was political or otherwise. The fault lies with the NUI for this embarrassment and it raises questions about the quality of governance.”

Dr Walsh said he is aware that “there are many NUI graduates who are hugely embarrassed,” and said he has been surprised by the level of correspondence he has received on the matter.

He said while there are others who have questionably received honoured doctorates, “Brian Cowen stands out as the monumental faux pas.”

“I’m sure he [Cowen] did the best he could and I’m sure he’s a very nice gentleman, but as Minister for Finance and then Taoiseach he brought the country to its knees and as a result inflicted great hardship on the people.

“In other countries, there would be retribution was such mismanagement, so the NUI has inverted all of the norms in inviting him to receive an honorary doctorate.

“It was probably a cause of embarrassment to himself too, because he probably realises that he doesn’t justify the receipt of the award. Ireland did not have to go through most of the trauma it experience.

“Brian Cowen did most of the damage and that didn’t have to happen if he took the advice he received. Jobs wouldn’t have been lost, houses lost, or misery inflicted – it all stems back to his bad judgement as Minister for Finance, and then when he was left shell-shocked.

A spokeswoman for NUI declined to comment, beyond stating that it had been its tradition for decades to honour those who have held the office of taoiseach.

The decision to grant the award was made by the NUI’s 38-person senate.