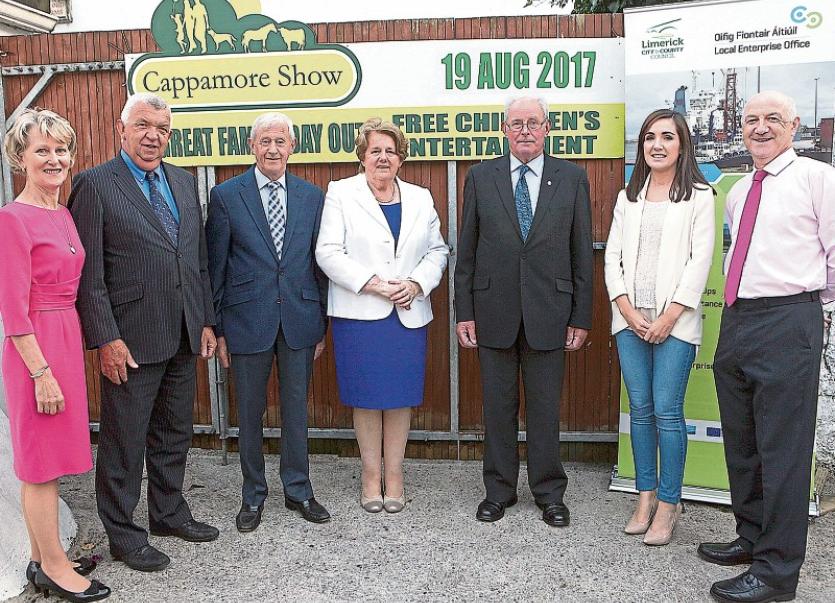 PUTTING on the biggest show in the country by a small parish is a big challenge but especially this year as Cappamore Show has new lodgings.

They are moving from Portnard down the road to Ballyvoreen for their Saturday, August 19 date.

One man who has been involved with sizing up and preparing every location is Jimmy McCarthy, honorary president. The fit as a fiddle 85-year-old has seen all 63 shows as he is the only continuous link by a serving committee member to their very first event.

Mr McCarthy said the new field is a “lovely venue”.

“There is a great panoramic view of the countryside,” said Mr McCarthy, who doesn’t want any dark clouds to spoil the scenery.

“There was a downpour last year at 3.30pm. You don’t mind a shower of rain but this was a downpour. Hopefully it will be a fine day which is very important for any outdoor event,” he said.

Hayes’ function room was packed to capacity for the official launch on Wednesday evening and Mr McCarthy received a warm round of applause.

Marie Hayes, chairperson, thanked their sponsors without whom there would be no show.

“Many of whom are with us for for more years than we’d like to remember,” she smiled.

“The fact that they continue to show their loyalty means we must be doing something right,” said Mrs Hayes, who thanked the Gleeson family for their old grounds and John and Marie Hassett for the new.

Treasurer, PJ Blackwell, as the ‘money man’ said he should be concentrating on the euros and cents but he says sponsors’ moral support is as important as the financial.

”Sponsorship is one third of the running costs. Without sponsorship shows wouldn’t survive. They play a vital role along with the patrons and exhibitors and volunteers,” said Mr Blackwell. It will cost over €100,000 to run the day compared to £420 back in 1954. Times and prices may have changed but some things and people have remained the same.

Paddy Ryan “Luke”, longest running secretary in the country who has presided for 58 of the 63 shows, said many events fall by the wayside due to the lack of finance.

“Thankfully it’s not a problem for us. We’re not making millions,” he joked, “but we’re keeping afloat”.

Another reason many agricultural events are finding it a struggle is due to lack of man and woman power.

“We have in excess of 120 members on the committee and more volunteers around show time,” said Mr Ryan. A great community man, he says anything that can be done to enhance the quality of life in your area is worthwhile.

As an example of how the whole parish gets behind “their show” Mrs Hayes said they have eight new committee members this year.

“I don’t think any other show in the country could boast eight new members. It is great encouragement to see young people get involved," said Mrs Hayes. Looking ahead to August 19, she said: “Now the real work begins”.