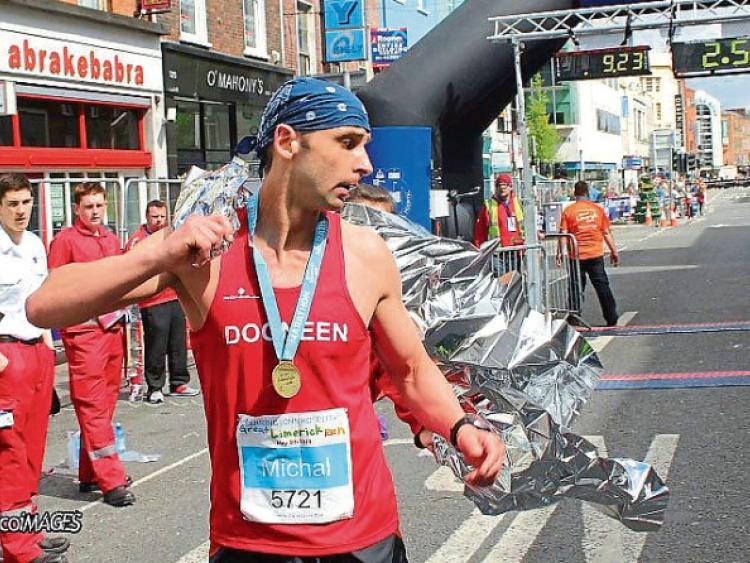 ONE of the best friends of Limerick murder victim Michal Rejmer has described him as a “warrior” with a “super-sized heart”.

ONE of the best friends of Limerick murder victim Michal Rejmer has described him as a “warrior” with a “super-sized heart”.

In an emotional tribute, his friend and clubmate Mike Purtil added: “Whether you knew him as Mike, Michal, the Polish guy, marathon man, or the guy with the bandana, he was above all our friend.”

The body of the athlete, who ran with Dooneen Athletic Club and worked at McDonalds, was discovered under wooden pallets and bags of turf in the rear garden of his house.

It was his friend Mike who introduced him to Dooneen Athletic Club, where he prospered.

”Mike was a true competitor, a warrior, a clubman, who wore the red of Dooneen with pride. But he was more than that. He was our friend.”

Mike added running was always made easier when Michal was by his side.

“Along the Canal Bank, out to Plassey, the University of Limerick grounds, Condell Road, Ballyclough, Raheen and Cratloe Woods were all areas we covered together swapping stories and shooting the breeze.”

Mike said his friend was “always positive and in a good mood”.

”In fact I think I only ever saw Mike sad once and that was when his dog Bertha died. Mike had no brothers and sisters and his mother had died in a car accident some years ago, so Bertha was the last remaining link to his mother. Mike always said ‘Bertha is my family,” his clubmate said.

One of Mike’s happiest memories of time spent with Michal was when they climbed Carauntoohill together, plus travelling to the Aviva Stadium to watch Ireland v Italy in the Six Nations rugby championship.

Materialistic goods did not matter to the runner, Mike said, adding: “He lived a fairly simple life and he worked hard. Once he had a good pair of running shoes he was happy. Mike didn’t have a car but this didn’t deter him from going places or visiting friends. Be it on bike or foot, he would appear on the scene.”

Mike recalled Michal would at times run the 18km to his home, have a cup of tea and run home.

He said while Michal will always be remembered as a runner, there was far more to him. ”There was a human side, a person that cared, that you could rely on if you need help. One of his most commonly used phrases was ‘don’t worry I help you’ – and for sure he would,” he said.

Monika Matracka, 34, appeared in court over the weekend charged with murdering the 38-year-old athlete at the house they shared in the Briarfield estate in Castletroy.