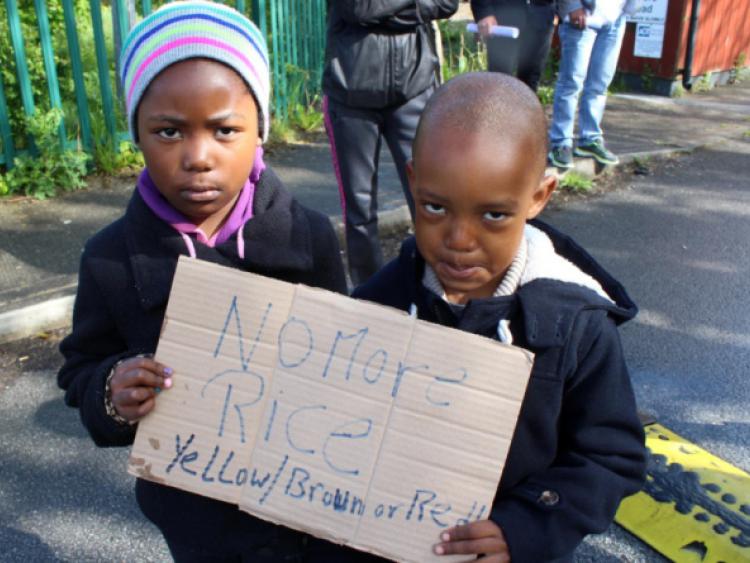 A ONE-DAY hunger strike at Knockalisheen asylum centre on the outskirts of Limerick has ended after talks with the management company Aramark.

A ONE-DAY hunger strike at Knockalisheen asylum centre on the outskirts of Limerick has ended after talks with the management company Aramark.

The centre, located just beyond Moyross, is home to some 211 asylum seekers from across the world, including a number of children, and a number of protests, including hunger strikes, have been mounted at the isolated centre in the past.

On this occasion, residents complained about the quality and lack of diversity in relation to the food being served.

Some residents claimed that they have also been admitted to hospital due to digestive problems as a result of the food.

One resident Terry, 42, from Nigeria, who does not wish to reveal his full name, said he has spent four years in Knockalisheen, and said residents cannot be expected to eat the same food “every day, for years on end”.

“Lunch and dinner is the same every day; the amount of half cooked chicken we have tried to eat here is unbelievable. Having fish is a real occasion, and I’ve never had a single steak here,” he told the Limerick Leader.

He said apart from breakfast, which no one had any complaints about, the diet largely consisted of rice and potatoes.

“Even the rice is not properly cooked. We only get €19 a week, and even if you wanted to cook your own food you are not allowed. The company is here to make profit. It is strictly business,” he said.

However, just one day after the strike, the residents said the food has already improved, but were cautious as to how long the new menu would last.

Released by the Department of Justice, the menu for this Wednesday included: cream of cauliflower soup, Indian style beef curry, Haddock and a vegetarian option, as well as side salads, and french fries.

Aramark is involved in running three State-owned direct provision centres which accommodate up to 800 asylum seekers, including Knockalisheen, in addition to Kinsale Road and Athlone.

It received €16 million in State funding up to 2010 for asylum seeker accommodation services.

In relation to the amount Aramark is paid by the State to run Knockalisheen, the department said that the values for current contracts entered into by RIA (Reception and Integration Agency) are not generally disclosed.

“Negotiations take place with a number of commercial entities on an ongoing basis and RIA endeavours to achieve the best value for money in respect of each contract. Nonetheless, it can be said that the average current daily rate for State-owned facilities such as Knockalisheen is €15.50 per person. The contract for services awarded to Aramark Ltd. was subject to an EU wide tendering process.”

Currently, there are 211 residents in Knockalisheen, and using these figures, to facilitate this number of residents all year round would cost the State €1,193,752.50.

Karen McHugh, chief executive of Doras Luimni, said the concerns raised in relation to food have been ongoing for a considerable length of time and are echoed throughout the country.

One resident, Donna Zuma, who said she spent two weeks in the University Hospital, due to stomach problems, was among those to meet with Aramark representatives.

The proposed solution is the establishment a food committee consisting of seven residents, who will demonstrate to the chef the types of foods that residents would rather eat on a small scale kitchen, and then be reproduced upon approval by the food committee on a larger scale to serve to the residents.

Such committees have been established in other direct provision centres and are running successfully, the residents were told. The committee will also draft up proposed recipes.

An Asian and African chef are also due to come into the kitchen to meet with the regular head chef, regarding their diets.

Aramark did not reply to queries from the Limerick Leader at the time of going to print.

A spokesperson for the Department of Justice said that management have not received any reported cases of illness.

“Management in the centre met with residents yesterday (Tuesday) and agreed a plan of action to address issues of concern. The centre is operating normally today (Wednesday).”

“All accommodation centres are contractually obliged to ensure that menus are cycled regularly to ensure variety and that they reflect different ethnic tastes or requirements.

“RIA (the Reception and Integration Agency) conducts inspections and other formal and unannounced visits to all centres throughout the year which include food and food hygiene checks. The HSE’s Environmental Health Officers have full access to accommodation centres and visit regularly. Any issues arising are raised with the contractor for urgent action and follow-up visits are undertaken as appropriate.”