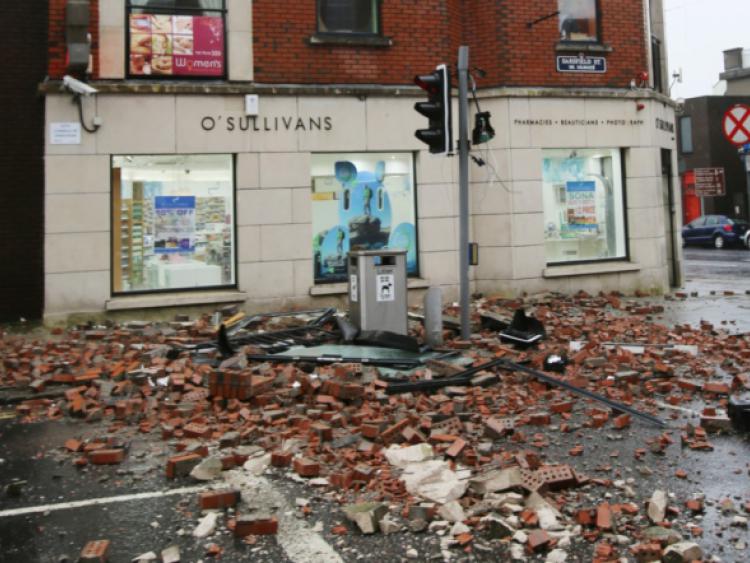 LIMERICK is currently suffering the major effects of ‘tornado like winds’, with a storm warning in place until at least this evening and roads closed across the county.

There are reports of damage across the city and county - with a number of warnings being issued to the public to stay indoors where possible. Gusts up to 170km an hour are being reported.

A level one tornado warning in place across the country, while status red wind warnings are in place until this evening.

There is damage to the former Dunnes building and Sarsfield Bridge is now closed in the city.

There are reports of dozens of trees down across the city and county.

Shannon Airport has been closed as of lunchtime this Wednesday.

There are reports that the roof has blown off Limerick Boat club while Askeaton swimming pool is closed and there are as of yet unconfirmed reports that articulated trucks have been blown over on the N20 near Croom.

The University of Limerick has issued a safety alert advising people not to leave buildings until the storm conditions moderate.

One report by Brendan Halpin on Twitter said: The wind is literally lifting the roof of the Foundation Building of the University of Limerick #redalert Sections threatening to come away.”

Limerick City Fire Service has issued the following warning: “Please only make absolutely necessary trips as we get through #WildWednesday Large numbers of trees down & other incidents being dealt with!”

A teleconference has been called for the next hour between all of the emergency services in the region.

UPDATE: Bus Eireannn has cancelled all services to and from Limerick and limited train services are currently running.

Pat Lysaght of Corbally Conservation Group is warning that the river is approaching flood levels.

“High tide is at 5.30pm and the river is already up about three feet already,” said the Corbally resident.

“It has about three feet left to go to reach the levels of last Saturday week and it is rising fast. The wind will keep driving it up,” he added.

FURTHER UPDATE: Gardai in Limerick have issued a warning to pedestrians and motorists to stay indoors, due to the dangers of flying debris and high winds in the city.

Superintendent Dan Keane of Henry Street said: We are appealing to everyone to take shelter and to stay safe until the storm has passed.”

There are no reports of any injuries yet.

Gardai have received reports that parts of the roof at the Maldron Hotel and a building at UL have been torn off in the storm.

UNIVERSITY OF LIMERICK: The Clare side of the campus has had no electricity for the past hour, while the main entrance is closed as a tree has come down. The University is advising students to stay indoors for the time being.

Latest from HSE: 10 trees have fallen in grounds of University Hospital in Dooradoyle because of storm. New traffic arrangements in place. Hospital system coping at present & priority is to clear as many beds as possible by discharges/transfers to cope with approximately 14 ambulances expected at Dooradoyle ED over the next hour. In addition we have had approx 6 walk in patients as result of storm.

A section of the M7 motorway northbound between Junction 28 Castletroy and Junction 27 Birdhill is closed until further notice due to debris on the road.

Mill Lane adjacent to Riverpoint is closed until 9pm

R521 – Ardagh to Newcastle West road closed – three large trees down, one removed but the Council hope to have road reopened in approximately two hours

R520 Bruff Line – will reopen within next half hour

The remaining roads are closed at present:

R511 – near Golf Club at Roxborough

For more on this, stay with the Limerick Leader online and on Twitter.