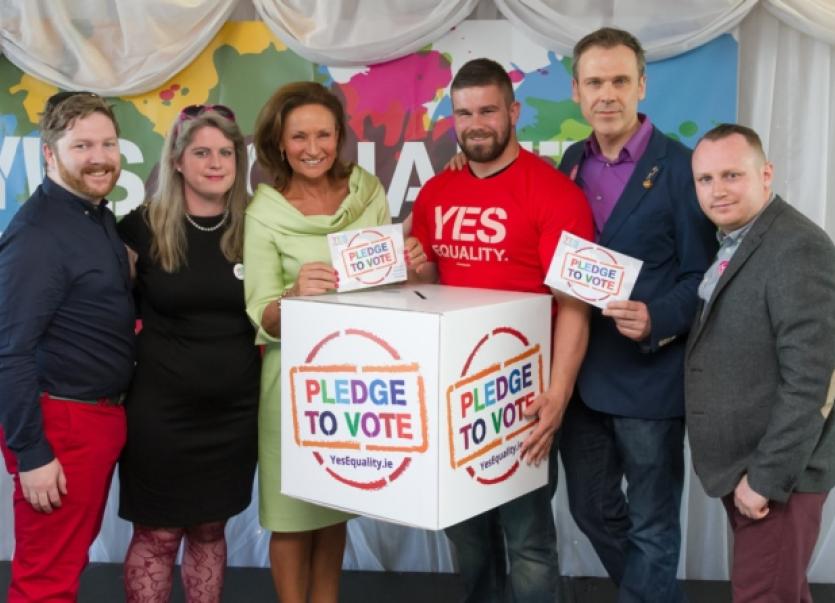 THERE was a huge crowd at the Strand Hotel for the launch of the pro-marriage equality campaign in Limerick.

THERE was a huge crowd at the Strand Hotel for the launch of the pro-marriage equality campaign in Limerick.

Local celebrities including fashion queen Celia Holman-Lee, Munster hooker Duncan Casey, actor Myles Breen and Limerick Chronicle columnist Richard Lynch are among the voices calling for people to vote yes to marriage equality when Ireland goes to the polls on May 22.

Alongside politicians from Sinn Fein and the Anti-Austerity Alliance, they joined almost 100 people at the launch of the campaign, which doubled as an early-evening party on the top floor of the Strand Hotel.

As part of the launch, there were a panel of speakers, including a mother whose daughter is a lesbian and has moved overseas, plus a young gay man from Limerick, Drew Murphy.

Rugby star Duncan said: “I care about human rights, and I believe equality and the right to be treated equally regardless of the country you live in is fundamental to the whole concept of human rights. Unfortunately that is not the situation we have in Ireland today.”

He pledged to meet as many people as he can ahead of polling day to persuade them to vote yes.

Limerick lady Fiona Ryan is hoping that she can finally wed her partner Elaine.

“We haven’t been able to have our own wedding yet, and I suppose it affects us very much. We see everyone else getting married and we want our own day out. We are the same as any other couple,” she said.

Dave Cuddihy, Yes Equality Limerick spokesperson urged those present not to become “complacent” and expect the referendum will simply pass.

“This referendum cannot be won by our community alone, we need the support of our friends, our families, and most importantly, the strangers out there on the street. It will take 50% +1 of the vote on May 22 to win this referendum: hat one person could be the person you spoke to between now and then,” he told the audience.