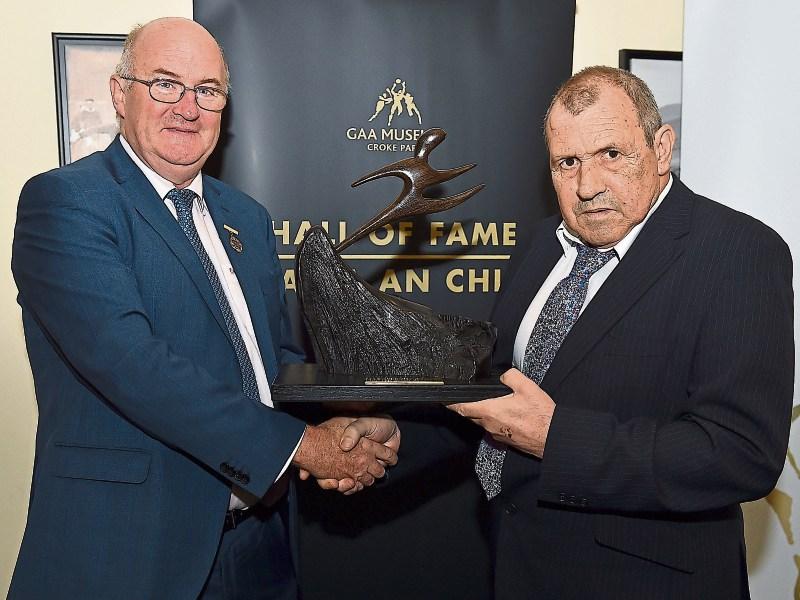 THERE is huge sadness at the news legendary former Limerick and Patrickswell hurler Leonard Enright has passed away aged just 65.

Tributes are being paid both locally and nationally to the former defender, who also served 15 years as a Fianna Fail member on Limerick County Council.

Leonard died in Milford Hospice last night surrounded by his family, while he was being inducted into the GAA Hall of Fame at the All-Stars awards on Friday evening.

"I grew up down the road from him and I was privileged to play on the team with him. When he moved to full-back position, I was honoured to take his jersey. He was so modest with the glint of mischief always in his eye. The tributes we are reading are not platitudes - they are all genuine. He was a really decent, down to earth man, who was quite literally a hero to so many."

Paul said he would mentor him in a quiet manner.

"He would advise you on different aspects of your play, on a one-to-one basis, quietly. He wouldn't over elaborate. It would be very simply done, but in a meaningful way," he said.

Leonard worked as a caretaker at Mary Immaculate College and the old County Council, while he also ran his own distribution business.

Fianna Fail TD Niall Collins described him as a "legend of Patrickswell and Limerick GAA", adding he was "a true gentleman in every way".

Current Patrickswell star Cian Lynch, who was named hurler of the year, paid tribute to Mr Enright at the ceremony, saying: “Heroes like him, legends like him, it's what makes it extra special.

"There's three of us here: myself, Aaron and Diarmuid. We grew up together. Patrickswell is a small little village and family means everything.

"After county hurling you always go back to your club, to your local people. And it's an absolute honour."

It's understood while Leonard was unable to watch the show, but his family did. He passed away just an hour after the ceremony concluded.

Further tributes have been pouring in for the former hurler on the social media site Twitter. Here are a selection.

All involved with Limerick GAA are saddened to hear of the passing of the legendary Leonard Enright. One of the finest full backs to grace the Limerick jersey. Our thoughts and prayers are with the Enright Family at this sad time. pic.twitter.com/Wm479nzBPQ

On a night we celebrated the All Star Awards for our #Limerick hurlers we sadly but proudly see Leonard Enright be inducted into the Hall of Fame and hear of his passing. A great friend of my late father's... https://t.co/kyytvDmd0l

RIP Leonard Enright... A giant on the field & gentle giant off the field. Former Limerick no3 was inducted into GAA Hall of Fame in August & mentioned just last night at All Stars. The Patrickswell hurler won 3 All Stars, a Munster SHC & National League medals in '80s #LLSport https://t.co/sj6K28JIqQ

So sad to hear of the untimely passing of Leonard Enright a legend of @patrickswellgaa & @LimerickCLG - a true gentleman in every way. @fiannafailparty Councillor from 1999 to 2014 #GAAAllStar & #gaahalloffame
Ar Dheis Dé Go Raibh a Anam

Great Sadness at the news of the untimely passing of A Legend in GAA circles & an inspiration to all. Leonard Enright Ar dheis Dé go raibh a anam #GAA #HallOfFame

We're saddened to learn of the passing of @LimerickCLG Hurling legend Leonard Enright.

Leonard was honoured last August when he was inducted into the #GAAMuseum Hall of Fame at #CrokePark for 2018.