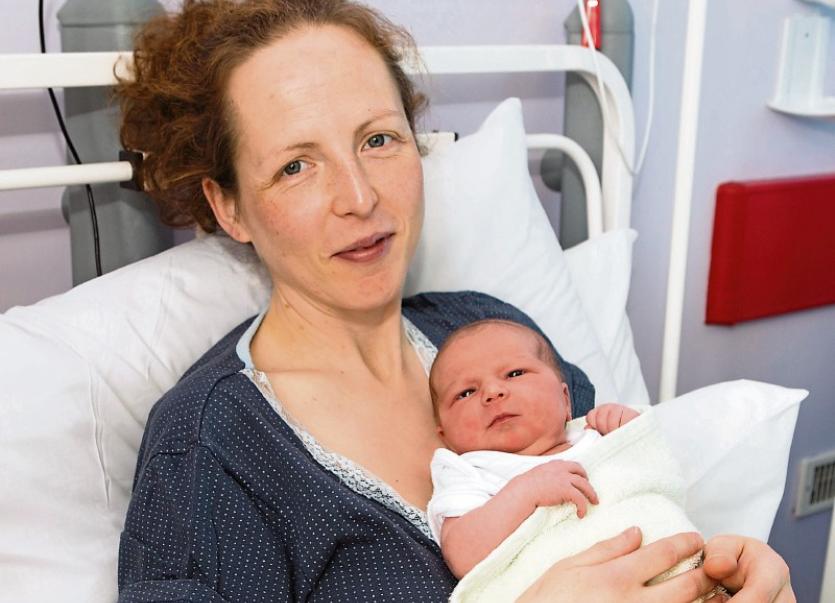 FOLLOWING a mad dash from Newport to University Maternity Hospital Limerick, proud mum Margaret Earle gave birth to one of the first babies born in 2018.

Margaret and her husband Ed welcomed their little baby girl to the world at 2.55am on New Year’s Day, weighing 7lbs 8oz.

Ten days overdue, their little girl’s “long awaited” arrival was preceded by a frantic dash to the hospital from Newport in the early hours of this morning.

“Everyone said ‘your third baby, be prepared to go quickly’,” Ms Earle laughed.

“I feel euphoric but tired.”

“I went to bed for about half an hour before my waters broke. It all kicked off about one o’clock.”

“We got here in the nick of time. It was very, very close. I was starting to push as we crossed the river. Poor Ed! It was a bit of a dash.”

“I remember I saw a big white bus in front of us and I thought ‘I hope that bus is in a hurry!’”

Despite the late hour there was still quite a lot of traffic on the road, she added.

“We arrived literally in the nick of time.”

“I could feel the pressure of the baby coming when we arrived at the door. It was perfect timing, couldn’t make it up.”

“Staff have been fantastic, just brilliant.”

A name for the new arrival to the Earle family has yet to be decided.

“Amy or Emily or Chloe, there’s about six on the list!”

“She’s a welcome little niece too, nearly all boys in the family. A football team! Her cousin Sophie will be delighted.”

Shakira Ryan, from Knocklong, also welcomed a baby girl to the world at the Maternity Hospital this New Year’s Day.

Her daughter has been sleeping soundly since her arrival at 4.18am this morning.

“She hasn’t woken since!”

Her newborn may have arrived with a full head of dark hair but Ms Ryan says she did not suffer with any heartburn throughout her pregnancy.

“It was the easiest pregnancy ever,” she laughed.

“I count myself lucky.”

Ms Ryan, an accident and emergency nurse at Leeds General Hospital, had returned home to Limerick for Christmas.

“I planned it well really,” she laughed.

Ms Ryan and her partner Ian Rush are still deciding on a name for their baby girl, narrowing the decision down to two choices.

Their daughter joins big brother Mason who is 13-months old.