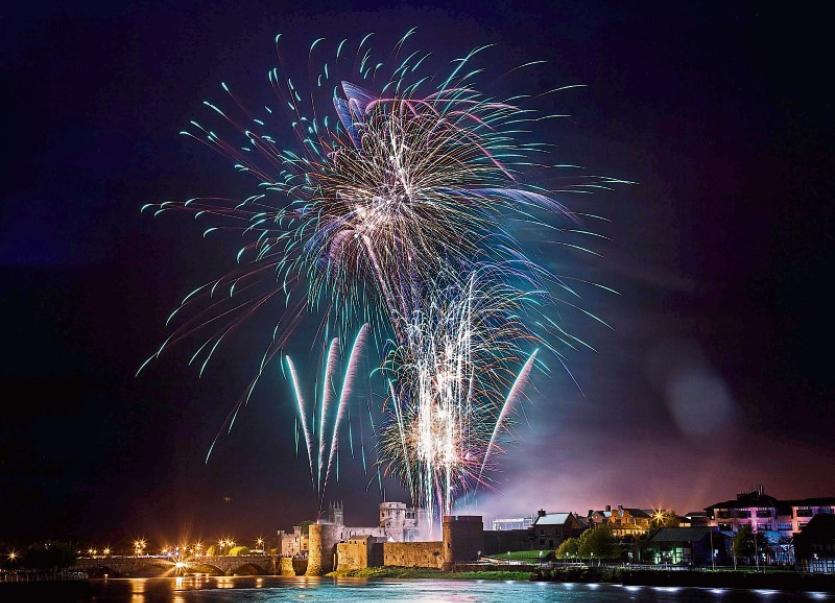 A fireworks display formed part of the planned festivities expected to cost €40,000

CELEBRATIONS scheduled for New Year’s Eve in Limerick city have been cancelled due to a threat of flooding.

The planned festivities were part of a €40,000 celebration backed by Limerick City and County Council.

Thousands of people were expected to line Clancy Strand, the city’s boardwalks and bridges on New Year’s Eve for the first fireworks display in the city on December 31 in five years, while a specially commissioned video projection was due to animate the facade of King John’s Castle.

However, due to a high risk of flooding in the area, the event has now been postponed until St Patrick’s Day 2018.

The decision to postpone the event was not taken lightly, according to Limerick City and County Council chief executive and director of service Caroline Curley.

“It is with great regret that this decision has been taken,” Ms Curley said.

“But in the interests of information from the event’s safety officer, the impact of the weather on the installation and rigging of the event and the safety of the tens of thousands of people expected to come out for the New Year’s Eve Extravaganza, it was decided to postpone the entire event.”

The equipment and the generator for the projection mapping were due to be erected tomorrow. However, Met Éireann has issued a yellow weather warning due to Storm Dylan, with wind gusts up to 110 km per hour forecast until the morning of New Year’s Eve.

High tides are also predicted on Sunday, with an expected surge of 620 mm.

According to Limerick City and County Council, the expected low pressure and strong south west winds may increase the surge right up the River Shannon towards Limerick, similar to what happened during Storms Ophelia and Storm Brian.

Acting on health and safety advice, the Council said it has instructed that flood barriers be erected immediately along Clancy Strand, O’Callaghan Strand and the boardwalks.

These barriers will remain in place for New Year’s Eve.

"This decision was not taken lightly,"Ms Curley said.

"But the decision was made this evening (Friday) to allow people to make alternative arrangements.”

Festivities planned for the New Year’s Eve Extravaganza will now take place as part of the 2018 Limerick St Patrick’s Festival, a collaborative event between Limerick City and County Council, Shannon Heritage and Limerick School of Art and Design LIT.