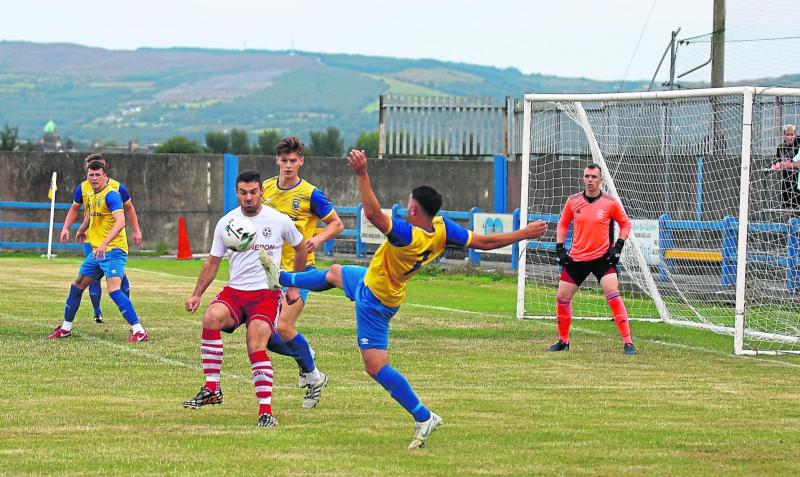 Shane Duggan, of Fairview Rangers, looks to gain control the ball against Regional Utd in their Premier Division game at The Fairgreen on Sunday Pic: Brendan Gleeson

THE old adage that “the more things change, they more they stay the same” certainly rings true in the Premier League.
It took just four games before all but last season’s top two, have lost their 100% record.

With Pike Rvs game versus Carew Park cancelled due to damage to their goalposts, Fairview took the opportunity to open a three-point gap at the top of the table.

They did it in style hitting an out of sorts Regional Utd for five without reply at the Fairgreen with striker Conor Ellis bagging a hat trick.

The home side were in scintillating form early on and Regional were chasing shadows for long periods.

The visitors celebrated the wedding of one of their players during the week and manager Sean Russell will be hoping that accounts for a flat performance.

The game was only minutes old when Darragh Rainsford gathered outside the area and when the defence backed off him he happily fired the ball low to the net.

Minutes later Rainsford turned provider nodding the ball into the path of Ellis who volleyed home from 18 yards.
Like the first half, Fairview were first out of the traps on the restart and Rainsford inch perfect cross saw Ellis rise unchallenged to head home from close range.

Ellis completed his hat trick when finishing at the back post from a superb Shane Duggan cross.

Ben O’Shaughnessy completed the scoring, getting on the end of a neat passing move before firing the ball home.

After a thrilling encounter a couple of nights earlier, Balla showed no ill effects to beat a fancied Aisling XI.

In a very tight first half, both teams cancelled each other out with Balla going closest in the dying minutes after a foul on Adrian Power but the resultant free kick was well saved by John Mulready in the Aisling goal.

Ballynanty upped the tempo after the restart and got their reward just on before the hour mark when Thomas Byrnes won possession just inside the Aisling half and ran clear to slot under the advancing Mulready.

Ten minutes later it was more great work from Byrnes who saw his initial attempt stopped by Mulready but Gbadebo Habideen was on hand to finish into the roof of the net.

Aisling made multiple changes and nearly pulled one back when Tony Whitehead rattled the crossbar from 25 yards out.
The game was back in the melting pot with ten minutes to play when Shane Clarke’s long-range shot hit the bar and deflected back off the stranded McNamara into the net.

However, Balla, with debutant Josh Adams outstanding, were not to be moved and held out to win a highly entertaining game.

Nenagh bounced back from a couple of defeats in their opening games to record back-to-back wins.

They picked up the points in style on Sunday when they overran a young Janesboro XI by five goals.

Matt O'Gorman was the hero of the morning scoring three of his side’s goals. Matt Spain and Alan Sheehan were also on the mark for the winners.

Two sides mired at the foot of the table were hoping to leap up the table when Coonagh hosted Mungret Reg but in the end both sides had to settle for a share of the spoils.

Cian McNicholas netted for Mungret, but Ger Myles scored his second of the season to seal a point for his side.