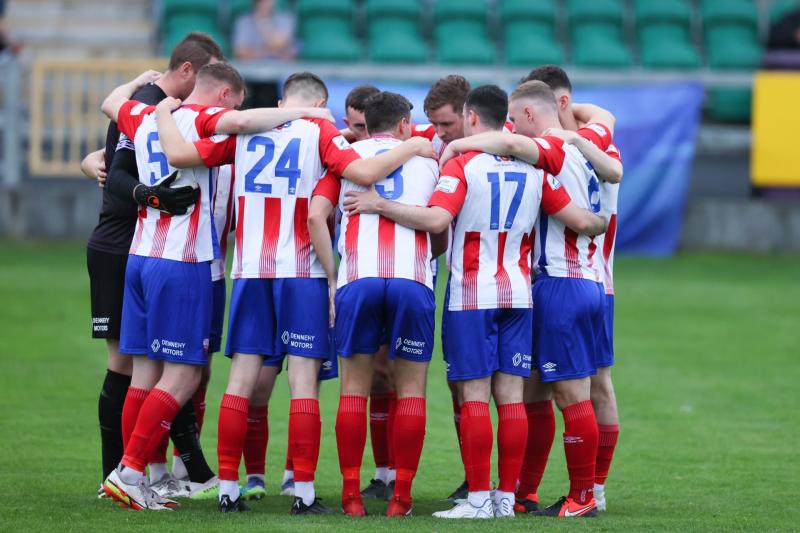 It finished Treaty United 1-2 Waterford in the First Division of the SSE Airtricity League.

Before a somewhat depopulated Markets Field, Treaty were caught cold in the opening quarter and were unable to overhaul Waterford. The home side will rue Enda Curran’s missed penalty just before half-time. Goals from Tunmise Sobowale and Darragh Power had the visitors 2-0 ahead at half-time.

In truth, the hosts rarely got near their best, and paid the price with a slow start.

Substitute Success Edogun got his first league goal for the club, but untimely, his 89th minute strike came too late for United to build upon.

In the two previous meetings of the sides this season – the home side had won. Treaty edged the Blues 2-1 in March before Waterford strolled to a 4-0 win on Suirside in May.

Two goals in the space of eight minutes put paid to Treaty’s hopes of winning five on the bounce. Sobowale picked out the top corner from distance and beyond the reach of Jack Brady.

The second goal arrived on 26 minutes. Treaty failed to clear the ball and after an effort rebounded off the post Power was on hand to tap home. Treaty had failed to ignite in the opening period.

Tommy Barrett’s charges were given a lifeline when Richard Taylor fouled Curran for a penalty. The effort from the Galway native was spectacularly saved by Martin out for a corner kick.

Treaty offered a bit more after the interval but appeared disjointed. The impetus added by half-time subs Willie Armshaw and Colin Conroy failed to garner much by way of goalscoring openings, but they were slowly getting on top.

Lee Devitt had their best chance, weaving his way through on goal before shooting straight at the keeper. It was a glorious opening in a game short of clearcut goalmouth action.

Waterford, were led by Richard Taylor, who had a dominant display at centre-back, clearing everything thrown at him during the second half. Eventually the deficit was halved.

Edogun raced onto a bouncing ball and lofted it beyond Martin. Treaty had half-openings and their last gasp effort with nine players in the box, yielded little.

It is a first defeat since late June while Wexford moved to within two points of fifth placed Treaty with a creditable draw away to second placed Galway United. Barrett’s men visit Cork City next Friday, as they’ll look to bounce back from a seventh defeat of the league season.