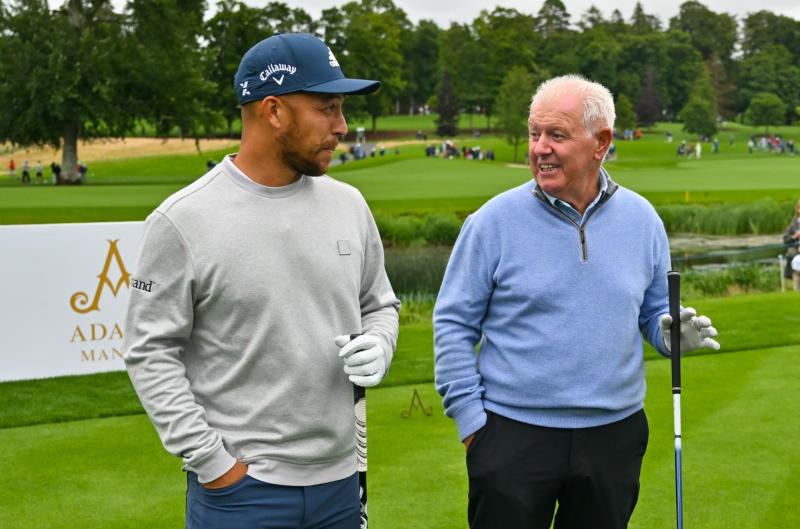 First round leader Xander Schauffele, left, with Gerry McIlroy, father of Rory, on the 10th tee during day one of the JP McManus Pro Am at Adare Manor

AMERICAN golfer Xander Schauffele takes a three-shot lead into today's final round of the JP McManus Pro-Am after setting a new course record at Adare Manor Hotel and Golf Resort on Monday.

Schauffele fired eight birdies in a brilliant bogey-free start to the 36-hole contest. The American's round of eight-under 64 gives him a significant advantage heading into the final 18 holes.

Beginning on the 10th tee, Schauffele followed successive birdies from the 12th by taking advantage of the par-five 18th to reach the turn in 33, before making further birdies at the first and third.

Schauffele continued his birdie barrage with a hat-trick of gains from the fifth, with pars over the closing two holes seeing him close out a bogey-free opening round and setting the Adare Manor course record.

The Olympic gold medallist's nearest challenger is fellow American Rickie Fowler, who opened with a bogey-free 67, while England's Tyrrell Hatton sits four strokes back in third ahead of the group on three under that contains Irish duo Shane Lowry and Seamus Power.

More than 35,000 spectators thronged the fairways at Adare Manor to watch the star-studded Pro Am.

Ten of the world’s top 11 ranked golfers are competing in the sold-out event, which is also being broadcast live on Sky Sports, Virgin Media and The Golf Channel in the USA.

Rory McIlroy carded a first round of 71, while Tiger Woods marked his first competitive appearance since withdrawing from May's PGA Championship by stuttering to a five-over 77.