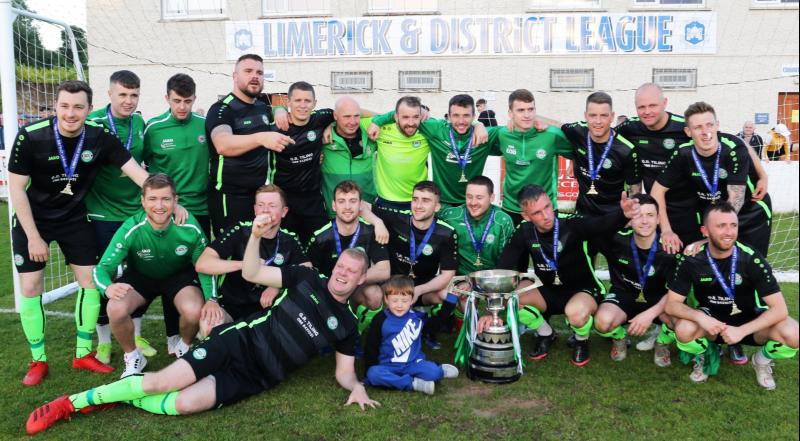 PIKE Rovers celebrated their second big trophy win in four days when claiming the Lawson Cup with a 2-0 victory over Fairview Rangers in their final played before a sizeable attendance at Jackman Park on Thursday evening.

On Sunday, Pike had edged past Fairview 2-1 at the Fairgreen in their Limerick District League Premier Division play-off to claim the Fran Mullaly trophy after the sides finished tied at the summit of the top flight table at the end of the regular season.

The opening half never really got going as the sides cancelled each other out with no real goal-scoring opportunities of note being created.

On the turnover, Pike seemed to raise the tempo somewhat and in the 59th minute the Hoops took the lead as Steve McGann created the opening. McGann's ball in from the left found Kevin Barry who had just entered the game and with his back to goal he majestically took the ball on his chest, before turning smartly and conjuring a brilliant finish into the back of the net.

In the 82nd minute, Munster Junior Cup winners Fairview created an opportunity to equalise when an AJ O'Connor 25-yard free kick was parried by Pike goalkeeper Gary Neville, but the 'View were slow to react to the loose ball.

Moments later, it was game over as Colin Walsh-O'Loughlin won a great ball in midfield and knocked it quickly into the path of Brendan O'Dwyer who at pace made his way into the area.

The 'View's defence was caught out and his powerful strike was parried by the netminder as the alert  Steven McGann who coolly headed the ball to the net to leave Pike worthy winners of this season's Lawson Cup and completing a memorable double following the Premier League title win four days earlier.