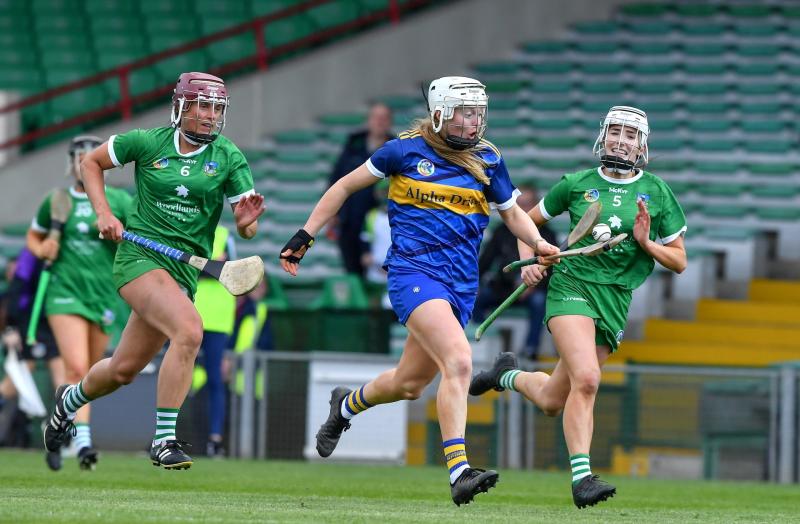 DEFEAT for Limerick in the Munster Senior Camogie Championship this Saturday evening.

In the curtain-raiser to the Munster hurling clash, it finished Limerick 0-8 Tipperary 1-17.

The wait continues for a first win of the season for the John Lillis managed Limerick who now turn attentions to the All-Ireland Championships.

The Premier County now advance to play Clare in the semi final next Sunday May 1 as the curtain-raiser to Clare v Cork in the Munster SHC in Thurles.

Four straight defeats resulted in relegation from Division One for Limerick in the Littlewoods Ireland League.

They looked to gain confidence in this Munster Championship campaign but were on the backfoot from the off with Tipperary scoring freely.

Tipperary played with the aid of the strong breeze and were 0-11 to 0-2 ahead at half time.

It was an opening half in which all six of the Tipperary forwards found the range.

The only Limerick score from play came in the third minute from midfielder Kelleher. Across the half Limerick did have six wides - four more than their opponents.

That Kelleher score left it 0-2 to 0-1 to the visitors to the TUS Gaelic Grounds.

In reply to the opening Limerick score came the first run of scores for those in blue and gold. By the 10th minute they were 0-6 to 0-1 ahead with Claire Hogan and Roisin Howard leading the way with scores.

And, the lead could have been greater but Claire Keating was alert in the Limerick goal to save from Hogan in the fourth minute.

Fifteen minutes without a Limerick score was ended by a Costelloe '45 in the game's 18th minute. It was her shot for a goal that was saved by Aine Slattery.

The successive scores from Tipperary eased them to a nine point interval lead.

Limerick made no in-roads on the change of ends.

Costelloe (free) did reopen the scoring but then came another run of scores for the eventual winners to ease 0-14 to 0-3 ahead on 40-minutes.

And the lead would have been greater but for more timely saves from Claire Keating between the posts for Limerick.

Caoimhe Lyons did find the range for Limerick and entering the final quarter it was 0-14 to 0-4.

Costelloe had further scores from placed balls but there was no way back for Limerick in a game that had a Cait Devane goal in the second minute of injury time.