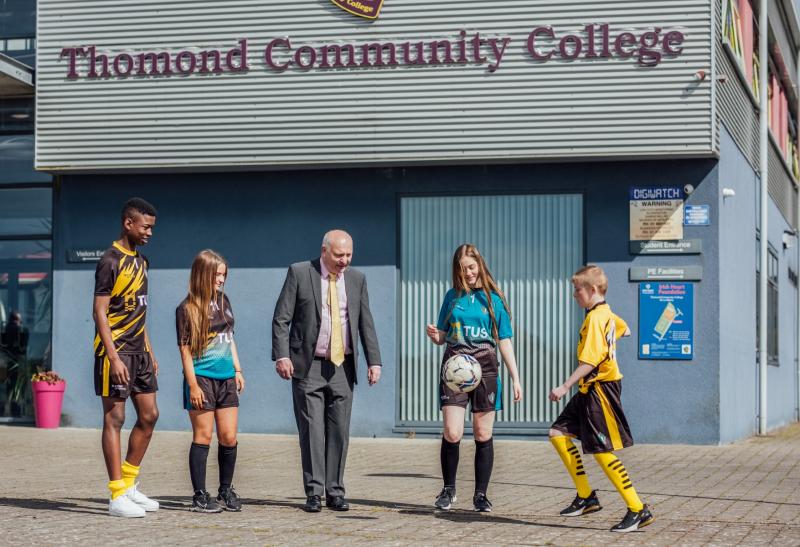 Thomond Community College is one of eighteen community colleges across the region under the patronage of Limerick and Clare Education and Training Board. This exciting new development aims to become a nursery for the emerging soccer talent in the Limerick area, providing a high standard of facilities, coaching, training equipment and a structured environment that will enable the holistic development of student athletes.

Treaty United will be using Thomond Community College’s state of the art campus as their Academy training base, jointly they plan to secure funding to further enhance the existing facilities with 3 astro turf pitches at the rear of the facility. The football club will be providing top class coaching services to the school’s football teams and access to experienced football personnel.

As part of this education and sporting partnership football camps and primary school soccer leagues will support soccer in the younger age groups of the community. The partnership will be developing soccer scholarships to Thomond CC and into third level education in the near future. This continuum approach to sport and education is an innovative and unique concept.

TUS, the sponsors of the school’s soccer teams, will play an integral part of this continuum, extending its support to the coordination of the primary school soccer leagues and the development of a Transition Year wellbeing module, with nutrition, fitness and mind-set at its core.

Speaking at the official launch event Vivienne Hogan, Thomond Community College Principal, highlighted how this unique partnership hopes to “have a huge impact on the local community by enhancing sports and sporting facilities in the area and most importantly providing a pathway for our students to reach their full potential both physically and academically.”

Conn Murray, Chairman of Treaty United, who also spoke, noted how: “Treaty academy are absolutely thrilled to have the opportunity to train in top class facilities with youngsters who are taking their first step in their professional career.” He also stressed that the best thing about coming back to the area is seeing “the immense capacity for partnership to evolve, especially between the Education and Sporting Sector of Limerick and the Mid-West”.

Gerry McAnaney, President of the FAI, who was guest of honour at the event, addressed all the students present reminding them that “the most important thing is to enjoy your sport, the rest will follow suit”.