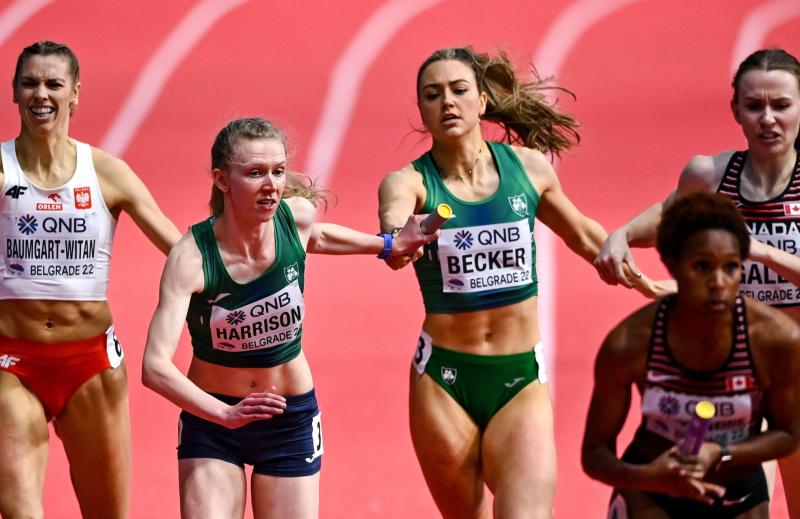 Emerald ACs Roisin Harrison, of Ireland, centre left, takes the baton from team-mate Sophie Becker during the 4x400m relay heats at the World Indoor Athletics Championships in Belgrade on Sunday

Becker put Ireland just outside the qualifying second place heading into the break of the first leg. Harrison, who is coached by  Eoghan McNamara, maintained the position before a break from Polish Aleksandra Gaworska pushed Ireland down to fourth as Gaworska made a dash for the lead.

Mawdsley coming into the second last leg for the team, kept the pace up and positioned Ireland for a break. On the final leg Healy seized the break to pass out Canadian Sage Watson crossing the line with Ireland in third place of the heat,

It was the second National Record-breaking performance of the day as the women secured 3:30.97, missing out a final place by 6 hundredths of a second, and breaking the existing record by more than 3 seconds.

The previous record was also set in 2004 Budapest by Karen Shrinkins, Ciara Sheehy, Michelle Carey, and Joanne Cuddihy at 3:41.61.

'It's disappointing but it was a great performance from the girls'