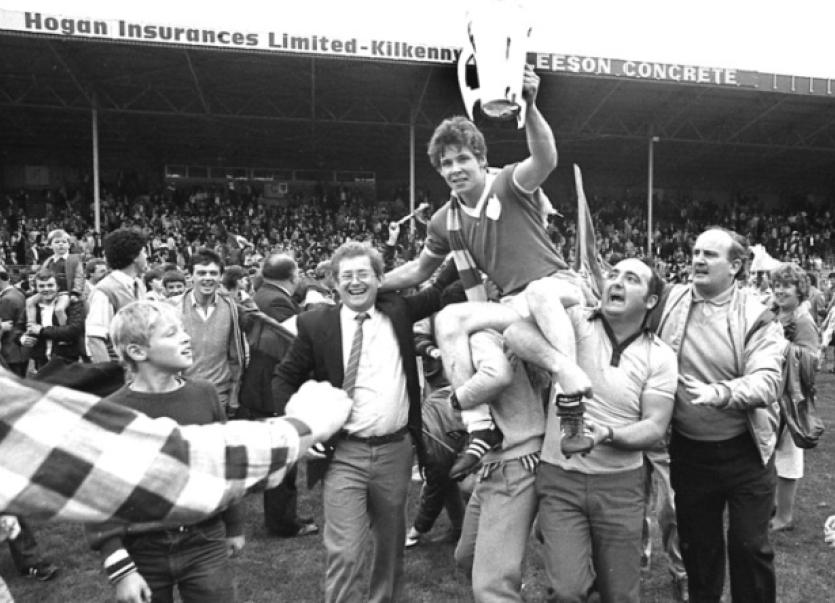 THE point has been revisited many a time over the past 30 years - goalkeeper Val Murnane pucked out to Anthony Carmody, he delivered to Brian Stapleton and he pointed.

THE point has been revisited many a time over the past 30 years - goalkeeper Val Murnane pucked out to Anthony Carmody, he delivered to Brian Stapleton and he pointed.

It wasn’t the winning point but the point that grabbed a replay for Limerick in the 1984 All-Ireland minor hurling final.

A last gasp draw in a game that Limerick had earlier led by double scores.

The year of 1984 carried much significance in the GAA as the centenary of the association and thus attention was heightened in most championships.

But when Limerick travelled to Thurles for the provincial minor hurling final, attention was less about the celebrations and more about the quest to end a horrible run of defeats in the Munster Minor Hurling Championship Final - Limerick had lost a remarkable eight of the previous 12 finals.

But there was something different about ‘84 and Limerick were to progress to win a third and indeed the last of the county’s All-Ireland MHC titles.

“I remember we started out about February or March with a few South v East trials games - there were no such things as development squads,” explained captain Anthony O’Riordan.

“It was about two nights a week inside in Mary I.”

O’Riordan was captain by virtue of Bruff’s county minor championship success of the previous year, when they beat Claughaun in the county final.

Ballybrown’s Pat Davoren was one of the Sexton Street players.

“I remember that at the start of the year you would be asking the club secretary are there any trials coming up for the minors. That was a huge thing to get a trial and off you would go to play and hope for the best - compared to now we did two nights a week and there would have been a challenge game maybe every month,” recalled Davoren, who scored a vital goal in the All-Ireland victory over Kilkenny.

The journey to glory started on May 2 in Bruff when Limerick defeated Cork 4-11 to 3-12 in the Munster semi-final.

It was a special evening for captain Anthony O’Riordan to lead the side on his home patch.

“There was a massive crowd because it was at the rural venue and you must remember people wouldn’t have had as much easy transport. It was a fierce tight game,” he recalled of the two point win, which came despite the sending off of Pa Carey in the final quarter.

It was to be the first of many a tight battle on the journey to lifting the Irish Press Cup.

That battle with Cork came just weeks after Limerick CBS had lost the Dr Harty Cup final after a replay to Farranferris.

Ballybrown’s Pat Davoren was one of those on the Sexton Street side and the county team.

“In fairness the team had a big start with a backbone of players from a Harty Cup team. That was a good backbone of fellas who were used to playing at the top level regularly. But the likes of Brian Stapleton, John O’Neill and others would not always have got a run in other years and they were a great addition to the Harty Cup lads. One thing that I would note about the panel was that they took players from clubs that would not have been that prominent - they went far afield to find fellas,” recalled Davoren.

The Cork win brought Limerick to yet another Munster final - against Tipperary in Thurles on July 15.

Limerick finally broke the hoodoo with a 3-6 to 2-7 victory.

That was two wins and both two-point victories. The character of the team was key according to Davoren.

“When we came under pressure we could take was what thrown at us - there was always someone to grab the game by the scruff of the next to pull us back into a game. There was character all over the field to be fair and a lot of that came out when we were under pressure. Character can always be seen when a team is under pressure and when one fella was having an off day there was always another fella to pick up the mantle. Look through the team and from goalkeeper out to the subs like Michael O’Brien, Colm Coughlan, Declan Barron, everyone made an impact at some stage,” outlined the Ballybrown man.

With a first Munster success annexed since 1965, it was off to Croke Park for an All-Ireland semi-final against Down on August 5.

“I remember there wasn’t many at it,” recalled O’Riordan.

Limerick beat the Ulster champions 2-17 to 2-6 but the battle was tougher than the scoreline suggests.

“They went through us rather than around us!” joked Davoren.

But onwards Limerick went to the All-Ireland final against Kilkenny. Centenary year meant the final was played in Thurles - the curtain-raiser to Cork and Offaly. Limerick blitzed Kilkenny and looked set for victory when all went wrong. In the end Limerick needed the late late Brian Stapleton point to snatch a replay, 1-14 to 3-8.

“I actually think it was Frank Murphy from Cork that was refereeing it and in fairness to him he gave us the chance to level it,” smiles O’Riordan.

“We were about 10 up with 10 minutes to play and we got snookered for a couple of goals. In fairness we showed great resolve to get back into it - I think we had really showed that as well in the games against Cork and Tipp,” recalled the captain and centre back.

“We did make it difficult for ourselves in some games - I don’t know if we got too comfortable or what happened but we switched off. Val (Murnane) made some unbelievable saves that day - he put his body on the line. And, he shouldn’t even have been on the field after getting an eye injury,” recalls Davoren.

Caherline’s Murnane perhaps should have been forced off injured, but he was lucky to be even playing in goals in the first place that season. Murnane was another of the Limerick CBS contingent.

“I was actually playing half back and we went up to play St Colmans in a challenge game and Leo (O’Connor) was missing and I said I would go into goals. The same day I left in about seven or eight goals and I on the bus on the way home Pat Fluery said at least I wouldn’t be playing in goals again. I said give me one more chance and that’s where I started. I had one of those games in the drawn Harty Final where everything went into my hands and that probably secured the county minors for me,” recalled Murnane.

While Davoren remembers his key role in the drawn All-Ireland, a save earlier in the year earned the teenager national recognition.

“I got the RTE Save of the Year - I got it for one in the Munster final. I think it was Anthony Crosse of Tipperary that had the chance and it was more or less a double save that I made - my big head got in the way!” joked Murnane.

“I think it was the first time a minor goalkeeper had won it. There were five goalkeepers and the others were all senior as far as I know.”

He was again called upon to come to the rescue in the drawn All-Ireland final and feels Limerick simply lost their shape when ahead. There is praise for the role of management in preparing the side for the replay. Patrickswell’s Phil Bennis was manager with selectors Tom Bulfin (Bruff), Sean O’Connor (Claughaun), Michael Weekes (Ballybricken) and Gerry Molyneaux (Rathkeale).

“I can remember from that day that when we came off the field we had lost some of our belief but in fairness to the boys they sat us down and gave us back our confidence - they spoke to us and gelled us together again,” said Murnane.

“We were blessed” said Davoren.

“I remember Phil saying that you needed luck to win something and we had it that day to get another shot. Phil Bennis was a great man to tell you what you needed to hear - he would always tell us that there was no reason why we couldn’t beat any team. We bought into that,” said Davoren.

If the drawn game was end-to-end free flowing hurling with scores a plenty, the replay, back in Thurles again, ended with a 2-5 to 2-4 victory for Limerick.

“When you see that scoreline it says it was a totally different game entirely from the drawn game. It was a tighter, tougher game - a lot more physical,” said O’Riordan.

Kilkenny led 2-3 to 1-2 at half time. The Limerick goal came from Pat Davoren.

“There was a lineball and I just got the hurley up to flicked at it - I knew that there was no way I was putting up my hand. It hit my hurley anyway and in it went,” he recalled.

“It was huge at the time - I remember the crowds up O’Connell Street as we came home on the bus, it’s something you never forget. It’s hard to believe that it’s our generation that won it last, 30 years is too long,” said Davoren.

That wait can end on Sunday.