Andy Lee profiled - from Limerick to top of the world 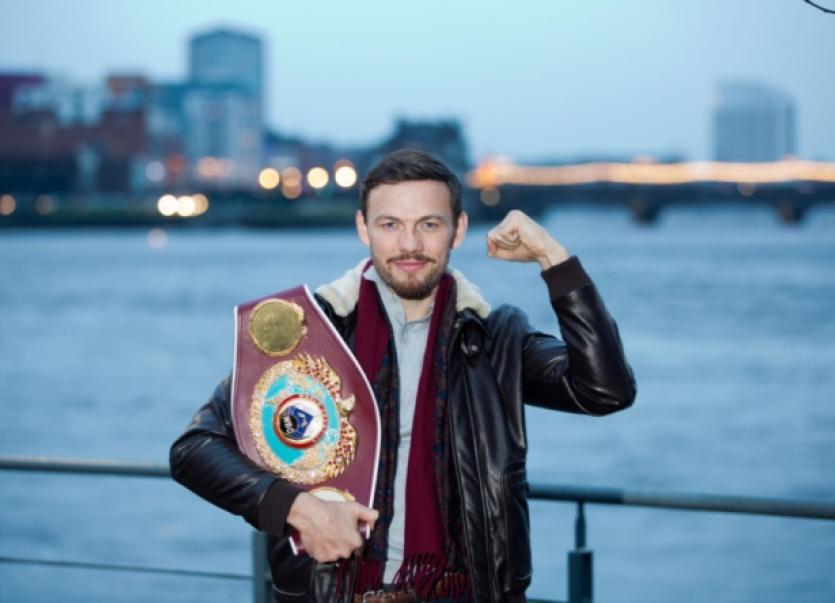 Jerome O’Connell charts his career from East London, to Castleconnell and to his world title triumph in Las Vegas last weekend.

“As I stood in the corridor before my ring entrance, my stomach was in knots, to say I was nervous would’ve been an understatement! Walking to the ring, I looked across at my family, the whole clan had turned out to support me. I remember thinking to myself, I don’t care how big this guy is I’m not losing this fight!”

The words of Andy Lee.

The fight he recalls is not the WBO World Title Fight but his very first competitive boxing contest - at 11 years of age.

He won that fight and it set in motion his journey to be champion of the world.

Born the fourth of six children to Tom and Ann Lee on June 11, 1984 in Bow in East London. Dawn, Tommy and Ned were before him, Roger and Hayley would come later.

Andy followed his brothers into Repton Boxing Club at a young age and within four years of that debut fight, he was a national champion after an intermediate 63kg success over a Mathew Kennedy of Sunderland in the England Schoolboy finals in Barnsley.

Andy’s parents Tom and Ann, had moved from Limerick city to London after they were married in the early 70s but In the summer of 1998, the Lee family returned to Limerick and set up home close to Daly’s Cross in Castleconnell.

It wasn’t long before a 14-year-old Andy was a member of St Francis Boxing Club on Mungret Street in the city.

The Limerick man first came to prominence in Ireland during the 2002 AIBA World Junior Championships in Santiago de Cuba.

He eventually won silver and along the way beat American champion Jesus Gonzalez.

It is often recalled that it was that victory over Gonzalez that brought Lee to the attention of Emanuel Steward.

As one of the first members of the Irish Amateur Boxing Association’s high performance unit and guiding by St Francis BC coaches Ken Moore and Finbarr O’Brien, Lee was the only Irish boxer in the Athens Olympics.

He won his first fight at the Olympics, but he then lost to Hassan N’Dam N’Jikam, of Cameroon.

The famed US boxing coach, who led 37 boxers, including Tommy Hearns and Lennox Lewis to world titles courted Lee since late 2002.

Ten years ago this week, Andy travelled to Las Vegas as a guest of Steward’s at the WBC World heavyweight title fight between Danny Williams and Vitali Klitschko.

It took another year but on December 15, 2005 Andy signed professional contracts with Steward.

After an amateur career that brought a world junior silver medal, a European bronze, three national senior titles and an Olympic Games appearance, Lee departed St Francis BC for the famed Kronk Gym of Detroit.

For the next seven years the Limerick man was to live in the Steward family home and learn his pro-boxing trade both inside and outside the ring.

Andy’s professional debut came on March 10, 2006, in the Joe Louis Arena in Detroit.

In the first of the 36 fights that led him to be world champion, Lee defeated Anthony Cannon.

Fourteen wins later, including a memorable March 2007 KO of Carl Daniels, Andy Lee returned for a professional bout in Limerick.

The date was February 2, 2008 and the local hero duly thrilled his home fans with a fifth round knockout win over Alejandro Gustavo Falliga in UL.

And although now a world title contender, Lee’s rise up the rankings was abruptly halted by Brian Vera the following month.

That July, however, Lee started to rebuild his career with victory over Willie Gibbs back in UL.

Indeed four of his next six fights were in Ireland.

By the time he beat Mamadou Thiam in the UL Arena in May 2010, Lee was back as a contender on the world stage.

Vera was still a blot on Lee’s record but revenge came on October 1, 2011. By that stage Lee had fought 27 times with Vera the only defeat.

Mentally it was a big moment for the Castleconnell southpaw and set him on course for the first of his two world title fights.

While much of the Irish attention was on our middleweight trio of Lee, Matthew Macklin and John Duddy, Steward and Lee were about to secure a world title shot.

The date was June 16 when Andy fought in the Texan heat for the WBC World middleweight title.

His opponent was the much vaunted Julio Cesar Chavez Jnr.

Defeat was ultimately Lee’s lot. But for fans of the Limerick man there is much about Chavez Jnr that remains uncertain.

It was to be the last fight for the Lee and Steward combination.

He may not have been in Lee’s corner last weekend but there is no denying the monumental role the famed Detroit trainer played in shaping Lee into the boxer and person he is today.

Lee returned to London after that Chavez loss and joined up with Adam Booth.

That October came the news of the untimely death of Steward.

The first venture into the ring for the new Lee-Booth partnership was in February 2013 - eight months after his world title fight loss to Chavez.

The contest was in Belfast’s Odyssey Arena on a night when all attention focused on the main attraction of Carl Frampton and Kiko Martinez. But Lee was back to winning ways and ultimately on the road to world glory.

Bit by bit Lee was slipping from the public eye.

But we now know that his determination to reach the top remained steadfast.

There was continued talk of a Macklin bout but it never came.

Then it appeared he was to get his big chance to face Gennady Golovkin last April in New York but the WBA middleweight champion from Kazakhstan had to cancel after the death of his father.

Next up for Andy was this June’s Madison Square Garden contest with John Jackson for the vacant NABF title at light middleweight title.

Much like his WBO world title winning bout, Lee struggled until he caught Jackson with a right hook in the fifth round.

For a while a Dublin date was mooted but eventually the duo were rubber stamped for the undercard of the Tim Bradley-Diego Chaves fight - live across the US on HBO and in Ireland on Box Nation.

At 4.29am in the early hours of Sunday, December 14, the people of Castleconnell, Limerick and Ireland had a new sporting hero.

A 30-year Andy Lee had found another right hook to stop Korobov and fulfil the dream that had started long before that first fight as an 11- year-old.

Next comes the defence.