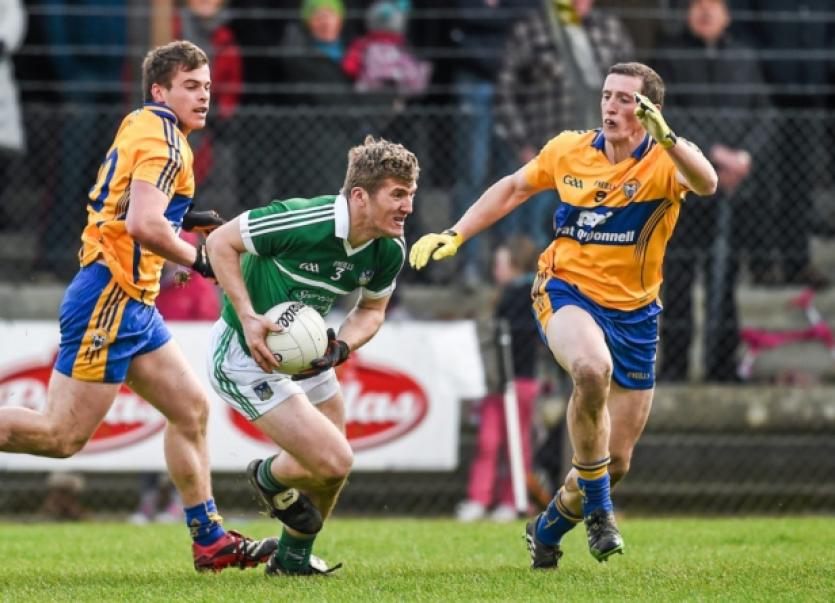 JOHNNY McCarthy made his Limerick senior football championship debut in 2004.

JOHNNY McCarthy made his Limerick senior football championship debut in 2004.

Twenty year old McCarthy arrived into a Limerick team that were after contesting a Munster football final and playing Division One league football.

Ahead of the 2015 Munster championship, McCarthy will be full back this Saturday in a defence that will include four players that hardly have 12-months inter-county experience, never mind 12-seasons.

“I think most of the young fellas are so confident - they treat it like any other game. There will be nerves at the start of the game but once they get into it hopefully they will thrive on it and some of the lads have so far but championship is something different. Its all a learning curve and you have to start somewhere. From what I have seen there is great hunger there and desire. People have worked hard all year and I am very happy to be with them. Hopefully Saturday will turn out to be a good game for us,” said McCarthy in a rare interview last week at Limerick’s training session in Mick Neville Park.

“It comes around pretty quickly alright and it doesn’t feel like that. There is a great bunch of young lads coming through and they are working very hard and we are developing the whole time. It’s a step-by-step process.”

He continued: “We have had ups and down but I think we are developing a good team again and hopefully we can put up a good championship performance this year, whether its the back door or we beat Clare and go on and play Cork. Performance is the main thing.”

“It’s goes quick and every championship is different - you start off from scratch again and hope to come with the same mind-set and hunger and hope it pays off on the day. That’s all you can do but everyone has their own ritual. It (pre-match ritual) changes a small bit but it’s about the simple things of eating right and getting good sleep and don’t work too hard - take the foot off the gas! I try to enjoy the week leading up to the game to get the best out of myself,” outlined McCarthy.

“Every game is the same really - you try and get yourself right to get through the game. We just concentrate on ourselves really. All you can do is get yourself right and turn up on the day and perform and that’s all we will worry about.”

He continued: “It’s great to come around to this time of the year because that’s what you train all year for.

McCarthy believes that the winning end to the league was an ideal championship boost.

“They were two tough battles. It was backs to the wall and they are the games you want - you want competitive games and hopefully that will stand to us,” he recalled of the wins over Clare and Louth.

“I think we did well near the end of the league and battled hard to stay up which was a good triumph for us and next thing is to play well in a championship game and win a Munster championship game, which will be hard away in Clare. It should be a tough one but we hope to perform.”

It may be a case of quietly does it as McCarthy has seen off many a top forward since 2004, but there’s no secret according to the St Kierans man.

“You just try to get a nick on the ball or cause hassle for the forward but defending is a team thing now - you are not left on your own. You attack as a team, you defend as a team. Its all about putting a game plan into action and hoping all turns out well on the day.”