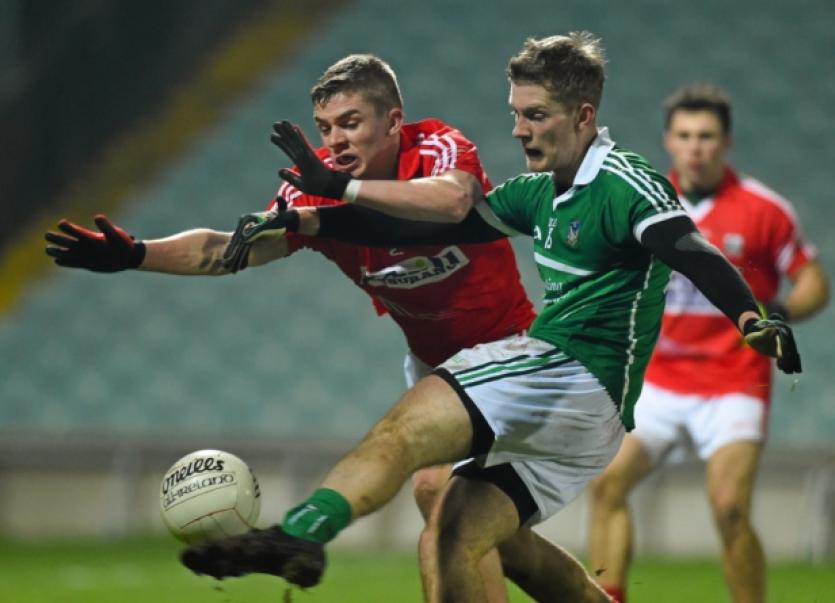 THE Limerick U-21 footballers went agonisingly close to famous victory in the Munster Championship this Wednesday night but ultimately fell to a 5-8 to 2-12 defeat to Cork.

THE Limerick U-21 footballers went agonisingly close to famous victory in the Munster Championship this Wednesday night but ultimately fell to a 5-8 to 2-12 defeat to Cork.

The Rebels came to the Gaelic Grounds as four in a row champions and on the back of a 3-15 to 0-8 win in this encounter last year. But the Declan Brouder managed Limerick took the game to Cork from the outset and indeed looked the better team for stages of this provincial quarter-final.

Alas it was the concession of five goals that denied Limerick a semi-final spot against Kerry. When Limerick look back on the encounter they will know that at least some of the goals could have easily being prevented.

In front of 693 in the Gaelic Grounds, Limerick set the early pace and had the opening point from Kevin Moore (free) after three minutes.

But even in their early counter attacks it was clear goal was on the minds of the Cork players.

Just four minutes was played when midfielder Darragh Murphy had the first of their five.

Glin’s Moore from a free and from play responded but Limerick were then rocked by the second Cork goal in the 12th minute - from Sean O’Donoghue, when a high ball into the goalmouth wasn’t sufficiently cleared.

But Limerick showed great resolve and Cork weren’t to score for the next 13-minutes.

Ryan Harkin and sub Jamie Davis had Cork points but another from Quinlan had Limerick nicely positioned as half time approached.

Then in first half injury time disaster struck for the home side when along delivery into the goalmouth from Jamie David somehow went all the way to the net past Limerick goalkeeper James O’Mara.

That handed champions Cork an undeserving 3-4 to 0-8 half time lead.

Without a win in the competition since 2011 and with no victory at the corresponding minor grade three years ago Limerick showed remarkable composure to start the second half just as they did the first.

Quinlan (free) and Cian Sheehan had points to reduce the deficit.

Cork hit back but Tony McCarthy ventured up field to keep Limerick in-touch.

With just 36-minutes played Cork had replaced both midfielders in an attempt to curb the Limerick influence but the game was really in the balance when Limerick levelled.

The equaliser came in the ninth minute of the second half when Cian Sheehan goaled.

That left it 1-12 to 3-6 and had the Limerick support dreaming of repeating the 2000 success over Cork.

Alas, Limerick were to score just once more in the remaining 20-odd minutes and that was in injury time.

Cork sprung all substitutes from their bench and of course found more goals.

After drawing level, Limerick needed to hit the front. But instead Cork notched their fourth goal - another high ball into the goalmouth and Ryan Harkin palmed to the net at the back post.

Five minutes from time and with the Limerick engine running low, Cork found their fifth goal when sub Cillian McIntyre found the net after Peter Kelleher’s drive had crashed off the crossbar.

The last score of the night was the second Limerick goal in the 61st minute from Cillian Fahy.

Defeat was Limerick’s lot but it will always be a night of ‘what-ifs’.