No New Year’s cheer for Munster in Galway 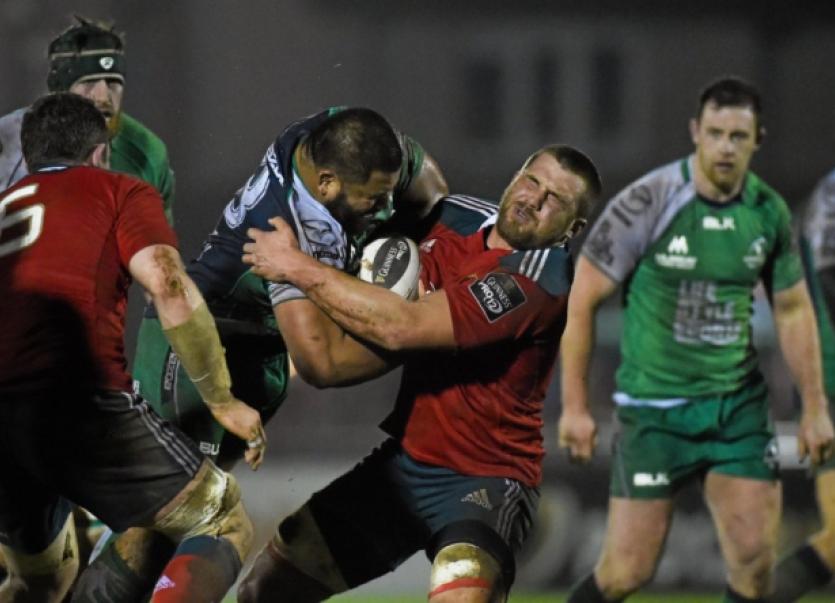 MUNSTER’S top four play-off hopes in the Guinness PRO12 suffered a blow after the side suffered a 24-16 defeat to an inspired Connacht side before a sell-out crowd at a wet and windy Sportsground in Galway on New Year’s Day.

MUNSTER’S top four play-off hopes in the Guinness PRO12 suffered a blow after the side suffered a 24-16 defeat to an inspired Connacht side before a sell-out crowd at a wet and windy Sportsground in Galway on New Year’s Day.

This was Munster’s first defeat in Galway in seven years and just the province’s second reverse to their provincial rivals in 42 meetings.

After a lighting fast start which yielded 13 unanswered points inside the opening quarter, including a try from captain Peter O’Mahony, wind-assisted Munster led 16-7 at half-time. That Kieran Marmion try for Connacht on 32 minutes proved key to the outcome as a 9-point lead simply wasn’t sufficient given the strength of the wind.

Connacht, backed by that stiff wind, upped their performance in the second half and tries from Craig Ronaldson and Aly Muldowney helped the home side record a deserved victory and maintain their unbeaten home run this season. This is Munster’s first time to lose three games on the road since March 2013.

Munster will be disappointed by their inability to score points inside the closing minutes which would have yielded at least a losing bonus point when Anthony Foley’s side was camped deep inside the home side’s ‘22. However, Connacht’s resolute defence held firm.

Munster made a dream start with driving rain and a gale force wind at their backs. A seventh minute penalty goal from Munsters former Connacht out-half Ian Keatley was followed by an opportunist try from captain Peter O’Mahony. Keatley added a terrific conversion in the swirling wind, while the out-half also added a 15th minute penalty goal to help the visitors build a sizeable 13-0 lead.

However, Connacht began to gain a foothold in the game as the half wore on and the home side stormed back into the contest on the half hour mark with a smashing try. Centre Robbie Henshaw broke clear in midfield when he collected a well-placed chip from out-half Ronaldson. Henshaw had Kieran Marmion on his shoulder and the scrum-half darted over for a terrific score. Ronaldson duly added the conversion.

Munster did manage to stretch their lead to nine points in the 38th minute when Keatley slotted another penalty goal after Bundee Aki was penalised for a high tackle on Simon Zebo. A nine-point advantage 16-7 didn’t look the most secure given the strength of the breeze behind Connacht in the second half.

The quick start Connacht craved to the second half arrived within three minutes of the re-start when Craig Ronaldson touched down after excellent approach play from Robbie Henshaw and Bundee Aki. Winger Darragh Leader converted and Munster’s lead was whittled down to two points, 16-14.

And with momentum behind them, Connacht quickly hit the front when replacement out-half Miah Nikora slotted a 55th minute penalty goal.

The home side built their lead on the hour mark when replacement George Naoupu barged over from close range following a fine try from Marmion. Leader converted and Connacht were suddenly eight points to the good at 24-16. Munster fought desperately late on to secure at least a losing bonus point, but Connacht’s resilient defence held them out.