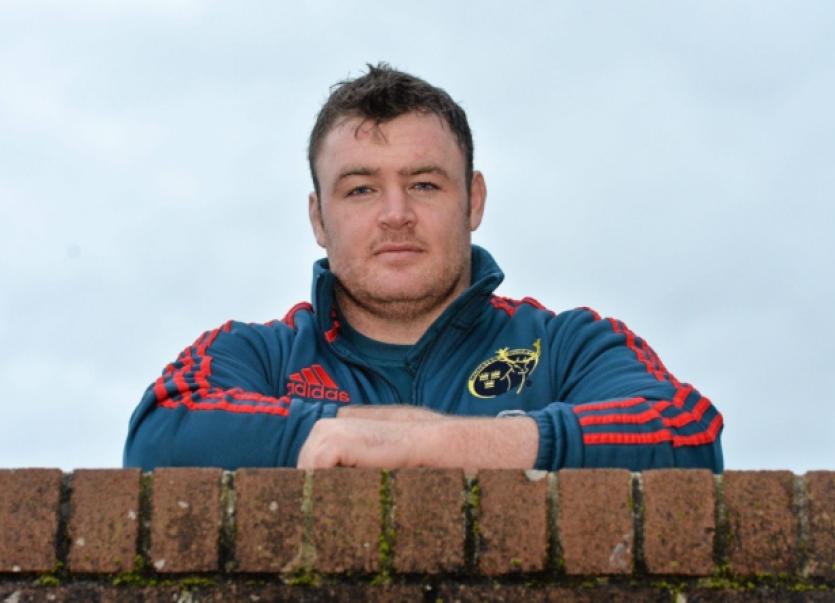 THEY were reunited last November, a dozen years on, the former Wallaby who fired Munster’s engine room for three seasons and the province’s dynamic loosehead prop. The passing years had changed them both.

THEY were reunited last November, a dozen years on, the former Wallaby who fired Munster’s engine room for three seasons and the province’s dynamic loosehead prop. The passing years had changed them both.

Dave Kilcoyne was getting treatment on the table in the Munster physio room when John Langford walked in.

Kilcoyne recalled this week: “I was about 10 or 12 at the time and we were living on the main road in Ballinacurra then.

“It turns out that John (Langford) was living across the road from us. I was a huge Munster fan at the time and I remember calling over to his house and he gave some gear, a Barbarians bag he had and stuff.

“It was weird. In November when he was over visiting Munster, he walked into the physio room at Munster and I was on the table. He kinda looked at me as if we knew each other. I just reminded him of those days and we had a good old chat about it.

“He remembered anyway. It is probably a small thing now, but looking back on it then, to have a Munster player living across the road, was a big deal.

“I used to be telling all my friends about it. He was always very willing to talk any time I called over to annoy him.”

Growing up, Kilcoyne mixed GAA with Old Christians, soccer with Summerville and rugby with UL-Bohemian. At school in Ardscoil Ris, he played on a side which reached a Munster Schools Junior Cup final.

Kilcoyne began his rugby career as a back-row forward, but moved up to the front row in fourth year in school. Until then, he was a number eight. He went on to win two All-Ireland U-20 titles with UL-Bohs’ and got selected for the Munster sub-Academy. Kilcoyne’s career has hardly looked back since.

There was the disappointment of not getting any game time in the RBS Six Nations Championship winning side this spring, of course.

“I’ve always said, it is about how you react to these situations.

“I was bitterly disappointed not to be included, but I just made a conscious effort that I was just going to give a reaction, but that reaction would come on the pitch. I was determined to give as good a performance as I could for the last couple of months.”

“I try not to let outside noise get involved in these games. It’s a such a big local derby, Munster v Leinster.

“It’s always huge. It’s one of biggest in the calendar every year. I was just treating it like that. Some people feel it is like an ‘Irish trial’ game in a way, you get so many internationals involved and others who are there or thereabouts on the international scene going head-to-head. It’s a great contest. That is how I treated it, as a big fixture for Munster.

“I read the comments (Rob Penney’s) alright likening the game to ‘Munster v the 6 Nations champions’, but I don’t think it was mentioned too often in training afterwards.”

“I think we would do it all exactly the same, scrum wise certainly, as we did against Leinster at the Aviva Stadium.

“For the yellow card against Leinster, I probably should have made more of an effort to role away. We certainly felt our scrum was dominant on the night. I think that showed. We tried to paint as many pictures to the referee as possible. We got rewarded a lot for it in the first half. There were a few in the second which we felt we deserved more from. But you don’t always get those decisions.

“The Heineken Cup quarter-final against Toulouse was a huge occasion for the team, for supporters and for Limerick city itself. The ref was getting frustrated at scrum time again. We were very confident and happy with how our scrum was operating.

“We thought we were largely dominant again for most of the game. When the two of us came back in after the yellow card, we continued to get more penalties.

“When we are dominant in an area of the game, we like to get rewarded for it.

“We put a serious amount of work and time into it with Axel (Anthony Foley), Rob (Penney) and the players. To send the two of us off, he saw it as a quick fix, maybe.

“We were victim of that the following week against Glasgow. Heads probably weren’t where they needed to be.

“We probably physically didn’t front up against Glasgow as much as we should have and they got a result which we were bitterly disappointed with at the time, our first home loss of the season at Thomond Park. That defeat probably brought us back down to earth a bit and then we went to Connacht last weekend and got a bonus point win away which was pleasing ahead of our biggest game of the season so far.”

“I played in the semi-final against Clermont last season, but Sunday’s game with Toulon, to me, is probably bigger because I am one year older and one year hungrier for a Heineken Cup final.

“I really want to win a Heineken Cup at a young age with my friends. A lot of the players I grew up playing with are on this team now. We may no secret of the fact that we would like to get some silverware together. It will be a career high for me on Sunday.

“We want to build our own memories, create our own destiny. We want to grab the bull by the horns, make our own bit of history. That starts on Sunday.”

“I will be up against Carl Hayman on Sunday. He has been tighthead for a very successful All-Blacks team for many years.

“He has been playing extremely well with Toulon. He’s a hugely experienced campaigner and deserves all the accolades he gets. I will certainly be looking forward to getting stuck into him.

“With myself and BJ (Botha) both being in Limerick, we do a lot of video work together along with Rob (Penney) and Axel (Foley). For me personally, a lot of the scrummaging is physical on the day.

“I try to get into a good strong mental mind frame and go out to try and attack your opposition.”

“I certainly think we are a better side than we were 12 months ago when we played Clermont in the semi-final.

“When Rob (Penney) took over, we had a very young squad and I think the coaching staff, Axel and Rob have done an incredible job with us. In my own case I am a year older now, one year more experienced, one year stronger, fitter, that all helps.

“Our game plan is one year down the road after being implemented. Everyone knows their function within the team and I think that really has helped us this year.”

“By the time we travel over to France on Friday evening, I will have all my prep done. We have the captain’s run to do at the stadium on Marseille on Saturday.

“I will be going over there the same with any other game.

“I like to relax the night before the game, take my mind off it which will be a bit more difficult this Saturday night being such a big game.

“I’m pretty good at shutting off, trying to clear my mind and getting a good night’s sleep, ready to go to war on Sunday.

“For me the hours leading up to kick-off is generally just having the craic with the lads on the team.

“There is a great comraderie within the squad at the moment. If you go through the likes of Conor Murray, Peter O’Mahony, Dave Foley, Mike Sherry and Stephen Archer, these are the lads I have played with since I was 16 with Munster Schools.

“We have had Axel as a B&I Cup coach, he is the forwards coach now. Some of my best friends are in the squad, so there is always a bit of banter when we travel together.”

“Sometimes you can let the outside influences distract you from the job at hand. I prepare like I do for any game.

You can let these occasions be too much and play the occasion rather than the game.

“At the end of the day, it is going to be 15 fellas on the park at any one time going at each other as hard as they can for 80 minutes.

“If you lose sight of that, it can be dangerous. I need to make sure I have all my prep done, know my role, and make sure I am mentally right for 4.30pm on Sunday.

“People will say we are underdogs when you look at the internationals, the bank roll of the Toulon club, but I take confidence from our squad, the strength and depth we have.

“I think we have an ability to go to France and win a Heineken Cup semi-final over there.”