Markets Field on target for May opening 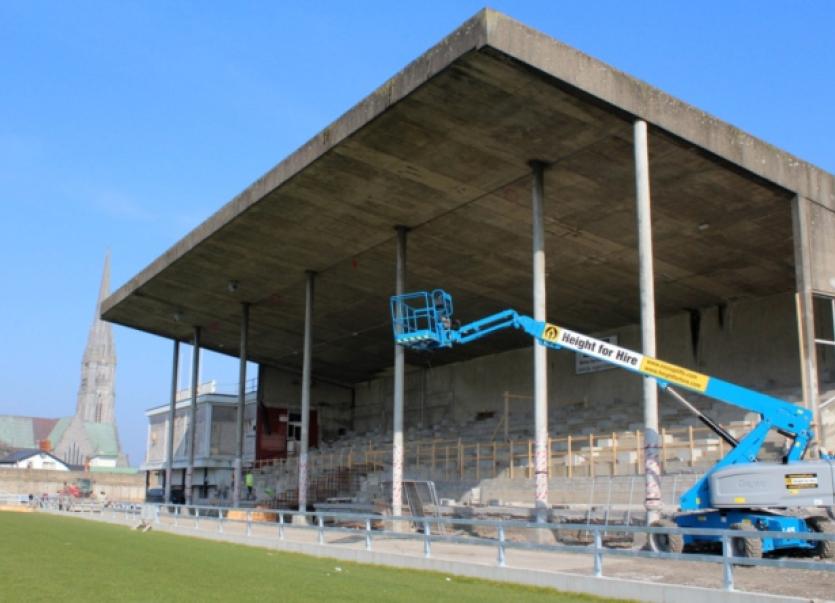 REDEVELOPMENT work at the Markets Field looks set to be completed in time to allow Limerick FC return to their spiritual home in mid-May.

REDEVELOPMENT work at the Markets Field looks set to be completed in time to allow Limerick FC return to their spiritual home in mid-May.

The club had hoped to make its return to the historic venue in time for the start of the new SSE Airtricity premier League season which kicked off earlier this month.

However, that return was delayed - with the club moving their games to Jackman Park in the meantime - and is now expected to take place in mid-May, possibly for the club’s May 16 home league tie with Munster rivals Cork City.

When completed, the Markets Field will be a Category 2 UEFA stadium with a capacity of 3,075.

From a visit and walk about the venue this week, it is obvious that while a good deal of construction work has still to be completed, the project is progressing nicely.

The playing pitch, which was laid 18 months ago, is in excellent condition from walking across it and the surface boasts a lush covering of grass.

The stadium will boast its own irrigation system which will help with the maintenance of the playing surface.

The venue, currently owned by the Limerick Enterprise Development Partnership (LEDP), has hosted various sporting events since the mid-1880s when the Limerick Cycling Club held races there.

George Lee, of the LEDP, who is project leader on the Markets Field redevelopment, explained: “The main stand will have seating capacity for 1,340. That area is designed for home supporters as is the terracing on what was known as the poplar side and across at the Cathedral/Rossa Avenue end.

“We are progressing now towards putting pre-cast on the main stand and after that the seating can go in there. All the bases have been laid for the floodlighting. The pitch has now been clearly defined by fencing.

“There is a lot of work going on under the main stand. In there are dressing rooms for both the home and away teams. There are also match officials dressing rooms, disabled access dressing rooms, shower facilities, physio rooms, doping control rooms and a public medical room.

“We have upgraded and improved our security systems around the place”.

“Over the next couple of weeks people will really start to see the ground coming on. We are also looking at the aesthetics of the ground, cleaning the walls, both internally and externally.

“There has been no decision made on when Limerick FC will play their first game here as obviously we have to consult with the statutory authorities on it. The building programme takes us up to early May.

“We are pretty much ahead of that building programme, but the ground should be ready for certifications from around the start of May.

“There are all sorts of event management plans. We are very conscious of being in a very residential area here, so obviously we want to get the traffic plans right. We have given people assurances that all of that is going to happen properly.

“We are also very conscious of making the match day experience the best it can be for those coming to the ground. We have to consult obviously with the fire and health and safety and get our own health and safety assessments done on it and ensure all of the insurances and all of the ‘I’s’ are dotted and the ‘T’s’ are crossed.

“This has potential to be a wonderful stadium. It has been 31 years since Limerick has played soccer here. I think if it takes one or two more weeks to get things right people will appreciate that.”

While Limerick FC will play their home fixtures at the venue later this season, the Markets Field also has the potential to host other sports.

George Lee said: “We are constructing a 3,075 capacity stadium here. This is a municipal stadium and one we would like to see getting usage by all sports and groups.

“The Markets Field will be here for every sport. I think that is the really exciting thing for me in this, I am dying for the day when I can see rugby being played back in here, when I can see all the other sports engaging. “We are happy with how the work is progressing. The building programme is actually ahead of schedule as we speak.

“We would have spent about €500,000 on redeveloping the pitch surface and we would gotten grand aid of €1.1 million around the development. We have made additions to that to get the ground to where it is.”