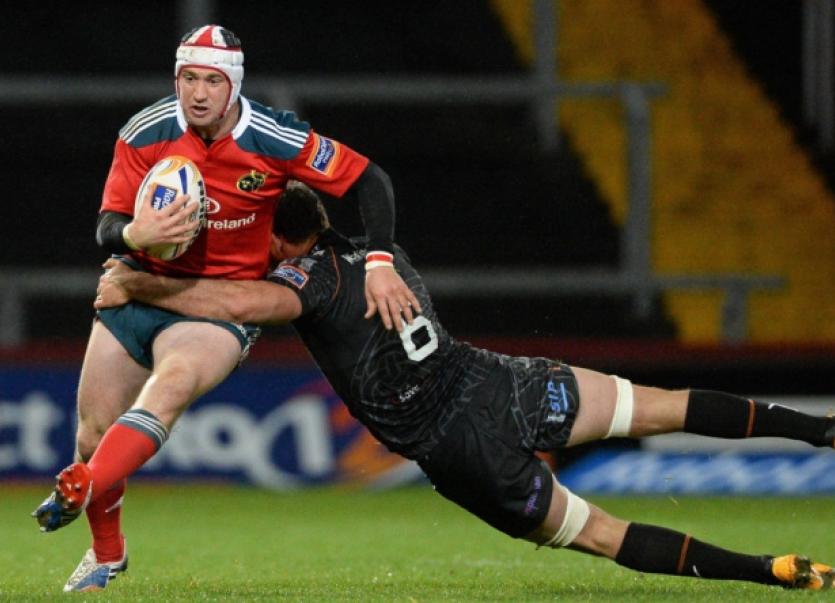 JOHNE Murphy admits that 12 months ago it felt like his rugby career was in a dark place. The stats don’t lie.

JOHNE Murphy admits that 12 months ago it felt like his rugby career was in a dark place. The stats don’t lie.

By the middle of December 2012, 29 year-old Murphy had made just a single appearance for Munster in three and a half months.

A combination of a loss of form and some niggling injury issues was costing him game time and leading the former Leicester star to question himself..

The closing weeks of last season brought some respite for Murphy, but his tally of appearances for the province reached just eight at the end of last term. Despite Munster’s run to the semi-final of the Heineken Cup, the winger didn’t get a minute of game time during Europe’s premier club rugby competition.

Some straight talking with Rob Penney at the start of this season has brought a change in Murphy’s fortune, however, as he explained in a frank and revealing interview in the lead-up to Munster’s crucial away Heineken Cup tie with Perpignan.

“THIS time last year was a stage in my career which wasn’t great.

“I was questioning myself just because I felt I had so much to give and I wasn’t getting an opportunity. I said before that myself and Rob (Penney) had some tough conversations from his point of view and my point of view.

“Those two moments for me last year made everything I was going through worth it. To be in that room, to hear those two legends of the game speak, I am talking about it now and the hairs on the back of my neck are standing up. They were phenomenal moments.

“You go through ups and downs in your career but that is what makes it all the sweeter when you look back like right now when I am in a decent enough vein of form.

“You went through all that hardship to get to places like this weekend and go out and play. They help you through to be a part of that. I am out the other side of it. But that is just part of sport. There are ups and downs. Everyone will tell you.

“I do a good bit of sports psychology work and I am able to deal with that in a certain way and try and get outlets somewhere else, so I had a lot of outlets last year whereas this year, I probably don’t have as much because I am very much trying to focus on where I want to be when I play at the weekends.”

“I never thought I would see the day where I would be kinds saying ‘jeez, I’m not sure how long I am going to be doing this.’

“I have, maybe, another four or five years, but it has got to that stage where I am trying to enjoy every weekend, so I will do that and I do that by playing.

“Andrew Conway and Gerhard van den Heever arriving provides extra competition. We all push each other. There was a stage last year when you are probably in a bit of a dark place and you hear about a new signing.

“Then when you go to leave for the summer, you hear of another signing and you are like ‘God’, but that is the way sport.

“I am living with Conway. I am having great craic with him. It is about trying to get out there early. I have been lucky in that I have stayed injury free.

“Andrew has had some really bad luck. He played on half a leg twice, first time in Aironi, he was hobbling. He scored a try in Cardiff on half a leg. He is going to be a fantastic player. Gerhard the same. It is just horrible luck he got injured in his first game. I have managed to stay away from injury.”

“With all the meetings I had at the start of the year with whoever, the sports psychologist, with Simon (Mannix), with Rob (Penney), it was about trying to nail my colours to the mast very early, just trying to put in the hard graft early and get it down. I am lucky it paid off.

“I felt that I was in good enough form to play against Leinster and against Edinburgh. I just didn’t get the nod that weekend.

“When I played against Gloucester then it was about trying to show I was in good enough form and trying to continue that. I still feel I have about 15-20%, maybe a bit more, to go.

“I suppose I am back to the form I was in when I first arrived, which I have been searching for for nearly two and a half years.

“It is about trying to keep that going now and making sure I don’t in any way slack off with any of my little extras and stuff I am trying to do.

“I am in a good vein of form, but that can all change on Saturday. I personally believe I won’t because I am in a good head space and it is about repeating that performance every weekend and making sure I am doing what I am being paid to do. Most importantly of all I am really enjoying it.

“ I am enjoying being here, enjoying playing, enjoying the roles I have been given throughout the squad. That is the most important thing.

“Once you are enjoying your rugby, it makes going out there every Saturday very easy.

“I was lucky enough to play at the Stade Aime Giral before with Leicester when I was over there.

“Actually, it was the time Dan Carter was over there playing with Perpignan. It was very enjoyable. They try and intimidate you and stuff. I remember kicking before the game underneath the goalposts and they were throwing things at myself and one of the other guys. It was water bottles and stuff.

“It was pretty intimidating, but it is what you want. It is enjoyable to be part of such an occasion down in the South of France.

“Our backs coach Simon Mannix spoke about it earlier. The atmosphere is something we need to talk about. Luckily enough, some of the guys have been there before. Munster a fantastic victory down there before I arrived here.

“It is about the lads who have experienced it telling the other guys what it is about and more so getting an enjoyment factor of trying to silence the crowd.

“When you run out it is going to be one of those moments where the hair on the back of your neck stands up because of how loud it is and what they are trying to do. It is about enjoying it and turning it into a positive for us. “

“It is great Conor (Murray)has signed for two more years with Munster. There was a lot of speculation.

“I suppose the slagging can stop now that Conor has signed! It is great for Irish rugby, not just Munster. He is going to be around for a long, long time.

“He is certainly one of the best scrum halves I have ever played with. He is a huge addition to any team he plays in.”

“That last minute try we conceded at Thomond Park last weekend is something we have looked at this week and something Axel (Anthony Foley) has spoken about in the defence reviews, giving them a bit of a leg up towards the end.

“His exact words were; ‘those little things count’ so we have to make sure it doesn’t count come 5.30pm on Saturday. Everyone has spoken about it since the first pool game away to Edinburgh. We have put ourselves under pressure, everyone wants to have a home quarter-final and if we want to be seriously looking at achieving that, we need to be winning our next two away games.

“This five-week block leading into Christmas is huge for us, for both our Heineken Cup and League season. I think no better place to try and make a statement than down in the South of France.

“We have come a long way from where we were this time last year. “

“There is a bigger group of players who are fighting for positions which I think Rob and the coaching team wanted to do with the rotation policy they brought in. A lot of us have prospered from that. That is a good sign.”

“I was lucky enough I didn’t have any injury problems through pre-season and into the season proper.

“Also in the back of my mind, my contract is up at the end of the year, with the age I am at, 28-29, it’s probably the biggest year of my career so far. I am open to anything in terms of my playing future. I am really enjoying it at the moment.

“If they (Munster) were to offer me a contract, it would certainly be something I would be very keen to put pen to paper on. I am at the stage where I jave to look at all my options. That is not trying to play any game. I am just being honest. I am really enjoying it here. Staying here is a good option for me at the moment, but I do have to look to the future as well.

“I am open to play anywhere on the pitch. I have always said that. I really enjoyed playing full-back. At the moment I am needed on the wing and hopefully I will keep doing the job I have been doing so far. I just want to play.”