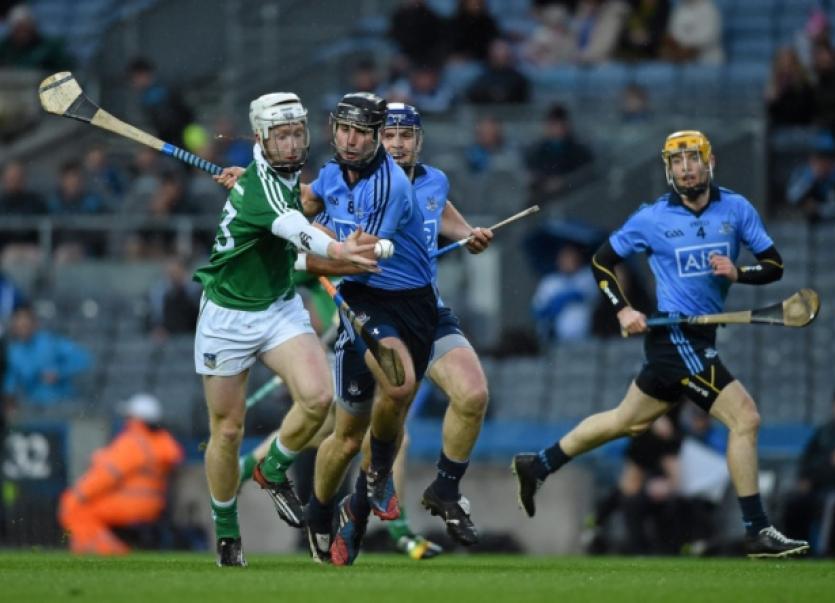 JUST like twelve months ago Limerick have made a tame exit at the quarter final stage of the Allianz Hurling League.

JUST like twelve months ago Limerick have made a tame exit at the quarter final stage of the Allianz Hurling League.

This Saturday evening in Croke Park Limerick fell to a most disappointing 1-25 to 0-16 defeat to Dublin.

From start to finish the Ger Cunningham managed Dubs were far superior to Limerick in every sector of the field.

They dominated possession, impressively winning almost every aerial battle in the contest, appeared physically fitter and tactically were very astute.

In an essence they did all the simple things correctly, while Limerick floundered.

Almost every individual battle across the Croke Park field went the way of the men in blue with Graeme Mulcahy’s four point haul a standout positive for Limerick on a forgettable outings.

The flat display comes on the back of the failure to once again secure promotion from Division 1B and on the back of last year’s disappointing quarter final loss to Galway in the Gaelic Grounds, which ultimately hastened the departure of then joint-manager Donal O’Grady.

As attention turns towards the May 24 Munster SHC quarter final tie with Clare, Limerick’s management and supporters are left with more questions than answers.

While time is certainly on Limerick’s side and they have shown in the past two seasons that they can turn on the style in the championship, there can be no hiding from this below par display. Especially as Limerick had 12 of last year’s All Ireland semi final team on display.

Just as Waterford and Wexford had done Dublin created and exploited space in the Limerick defence with Mark Schutte hitting 1-5 from play in his role as the isolated attacker. He raced left and right into space with Richie McCarthy unable to curb his influence. But the quality of ball made Schutte’s life easy and questions must be asked as to why the outfield players were able to deliver such ideal possession to their attack.

Graeme Mulcahy had Limerick’s first score from play in the ninth minute but it was a temporary reprieve as Dublin continued to dominate.

Then Limerick lost captain Donal O’Grady to injury in the 11th minute and worse was to follow just before half time when All Star defender Seamus Hickey was also forced off injured.

It was an opening half that saw to see Limerick score just three times from play - twice for Mulcahy and once for sub Cian Lynch.

That Lynch score came in the 15th minute after a fine move which saw Paul Browne deliver back out the field as soloing into the attack.

But that was just one positive from a half that ended with Dublin 0-14 to 0-8 ahead.

Dublin led 0-8 to 0-5 in the 21st minute when they was a slight chance for Limerick to find some spark but alas the chance when abegging. Declan Hannon intercepted a Peter Kelly clearance and instantly slipped a pass to David Breen but he couldn’t contain possession with a goal chance on the cards.

Six minutes before the break Dublin could have had a first half goal of their own but David Treacy opted to take a point from a penalty after McCarthy had pulled back O’Callaghan.

If Limerick were to rescue anything in this contest they needed to find some early second half form but it was Dublin that pretty much put the game to bed with a second minute goal.

O’Callaghan had already a point on the board when Mark Schutte raced into and crashed low across Nickie Quaid.

There was a Limerick response and the next 20-minutes was about as good as it got in the game with seven of the next 10 points coming to Limerick.

James Ryan, Paudie O’Brien, Mulcahy and Dowling all scored from play in this period but still Limerick weren’t anywhere near dominating.

Indeed Quaid had to be alert to save at his near post in the 10th minute of the half after a drive from Paul Ryan.

And, in the game’s 57th minute the sliothar somehow stayed out of the Limerick net when a Colm Cronin shot was firstly saved and then rebound of the upright before Stephen Walsh somehow flicked clear while on the ground.

But this was to signal a return to scoring for Dublin.

Six of the Dublin points in this period came from play, many after errors by a tiring Limerick.

Sub Tom Morrissey had the final Limerick point in the 68th minute.

It was just the ninth from play for Limerick, while Dublin scored 18. Limerick only hit five wides, compared to seven for Dublin.