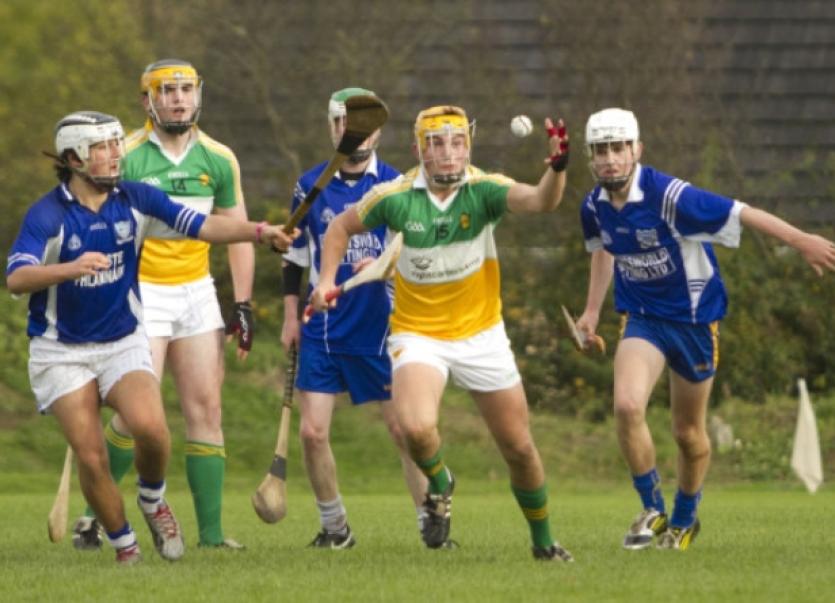 THERE was a 100% record for Limerick in the Dr Harty Cup this Wednesday afternoon.

THERE was a 100% record for Limerick in the Dr Harty Cup this Wednesday afternoon.

Wins in the Munster Post Primary senior A hurling championship for West Limerick Colleges and Castletroy College ensure both remain unbeaten and top of their respective groups.

Doon also got back to winning ways.

Limerick’s fourth side in the competition, champions Ardscoil Ris are not in round two action until next Tuesday when they meet Thurles CBS in Nenagh.

After drawing with Thurles CBS in round one, the amalgamation side powered by St Flannans this Wednesday, 3-17 to 0-9.

All makes for an interesting Limerick derby clash with champions Ardscoil Ris in the next round on November 19.

From the opening quarter of this game in Sixmilebridge there was only one winner with Seamus Flanagan leading the West Limerick line superbly with the five opening points from play and from frees.

It was 12-minutes before St Flannans scored but it was only a temporary break from the Limerick scores.

Cian Magner Flynn goaled in the 15th minute and further points followed for a 1-11 to 0-1 lead after 23-minutes.

St Flannans dropped players into defence in the seconds half but bit by bit West Limerick found the scores that could yet be crucial if scoring difference is required to determine standings.

Their second goal came in the 24th minute from Brian Hurley, who crashed a shot off the ground low to the net when played across the 14-metre line. Then in injury time sub Luke Ryan weaved his way brilliantly through the defence to seal the 17-point win for West Limerick who are a combination of Hazelwood College in Dromcollogher, Desmond College in Newcastle West and Colaiste na Trocaire in Rathkeale. They include former Antrim inter-county manager Dinny Cahill in their backroom team.

LAST season’s beaten finalists Doon got off the mark when recording a seven point victory over Waterford’s De La Salle in Clonmel this Wednesday.

Scoil na Tronoide of Doon had lost to St Colmans in round one but bounced back with this merited win.

Next up for the east Limerick men will be a vital Limerick derby with Castletroy college on November 19.

Doon’s management team of last season Justin Daly, Diarmuid McCarthy and Diarmuid Carr are bolstered this season by the arrival into the teaching staff of Clare hurler Brendan Bugler.

Doon were 1-8 to 0-6 ahead at half time against the Waterford side that had lost both games to-date this year.

The all-important goal came from Limerick minor Colin Ryan. But while Doon built up a commanding lead they were to conceded three second half goals to allow De La Salle back into the contest.

With 10-minutes to play the scoreboard was 2-15 to 3-11 with a second goal from Pallasgreen’s Ryan crucial to keeping Doon on top.

In the final minutes Doon had a third and clinching goal from Cappamore corner forward Joe Lonergan.

Doon can now turn attentions to the top two teams in the group - Castletroy and Cork’s Gaelcolaiste Mhuire as they attempt to return to the knockout stages after Christmas.

Castletroy College kept their 100% record in the Harty Cup - after surviving a scare from Gaelcolaiste Mhuire.

The city school secured their second win of the campaign after a 2-13 to 0-18 win in Charleville on Wednesday afternoon.

It was goals in each half which were the crucial scores for Castletroy - who played almost all the second half with 14 men.

Andrew La Touche Cosgrave goaled after 23 minutes, just as the Cork side were getting on top.

This levelled the game and the the sides remained tied 1.7 to 10 at the break.

Eoin Hourigan got Castletroy’s second goal after 33 minutes after a superb ball from Lorcan Lyons found the Murroe-Boher man in space.

Despite conceding seven of the last eight points the Limerick school held on for the win thanks in part to Barry Nash who scored five points.

Castletroy play Doon next on November 19.