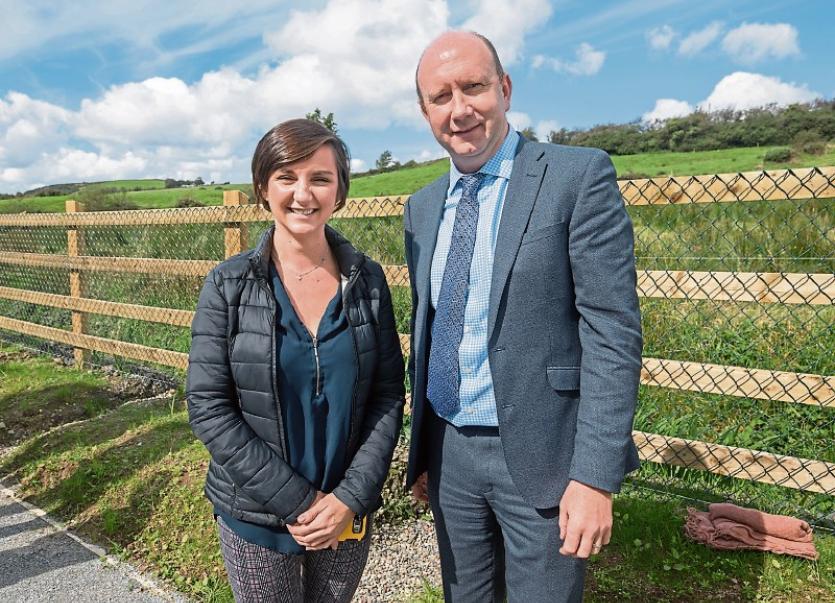 Caitriona Scully and Shay Riordan, West Limerick Resources, were pictured at the ribbon cutting to mark the Integration of the Old Barnagh Tunnel into the Great Southern Greenway

THE first two phases in the upgrading of the Great Southern Greenway have now been completed, Gordon Daly, Director of Community Development with Limerick City and County Council, told Adare Rathkeale councillors when they met in Pallaskenry last week.

Substantial progress and a substantial investment had been made, he said, but it was still a work in progress.

And he presented figures for June 2019 which showed that almost 25,000 people had used the greenway, nearly double the figure for June 2018.

Mr Daly detailed the work that had been carried out since the council took over management of the greenway four years ago and pointed out that the re-opening of the Barnagh Tunnel and its re-integration into the greenway was a very significant development. The tunnel, he said, was the most iconic feature on the 39km greenway.

Completing the upgrade and bringing it up to national standards was the aim in Phase Three, Mr Daly explained.

This would involve additional signage and fencing, he said, but the most important element would be resurfacing the trail to the same standard as in Waterford and Mayo. Work on appointing contractors for resurfacing was underway, Mr Daly explained, which he estimated could cost
up to €3m.

The council would also work closely with Kerry County Council which has received funding to extend the greenway from the Limerick Kerry border to Listowel. When the greenway is continued from Listowel and on to Tralee and Fenit, it would become the longest greenway in Ireland, Mr Daly said.

The council also plans to upgrade the viewing/picnic area at Barnagh, now linked to the tunnel, Mr Daly said and to introduce more facilities such as toilets along the way. Consultants have been appointed to address pinch points, obstacles and other issues along the trail, he said.

The council will also be investigating “all options” on how to link the greenway to Adare and the interpretation of railway heritage was also included in future plans, he told councillors.

“The overall aim is to have a top-class greenway and that it would have a transformative effect,” Mr Daly said.

Read also: Light at the end of the tunnel for Limerick Greenway