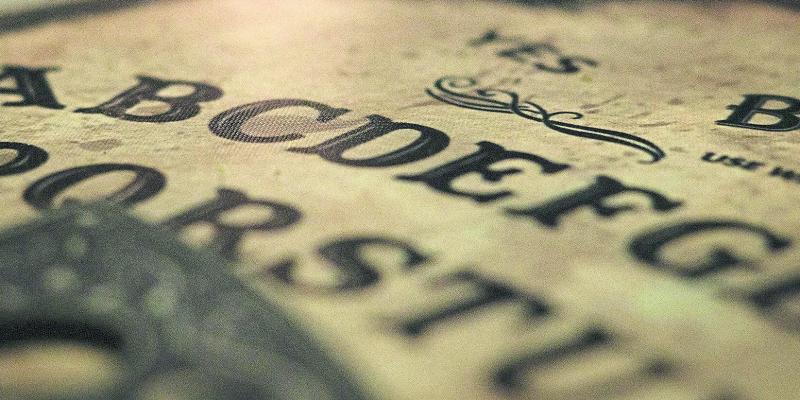 So, it’s important to find out how much and what you’re spending your money on and once you realise, you’re spending €70 on coffee or whatever it is each week, you can determine if that sounds reason

Forget about The Shining, The Exorcist, Candyman or Friday the 13th, if you want to look at something that will frighten the life out of you, take out your bank statements or log on and have a look at what you’ve been spending your money on in recent weeks.

Or, how about you and your partner, have a money séance.
You’re going to take out a Ouija board and try to make contact with money that has departed your account. You want to communicate with the other side and find out where it’s gone.

You’re trying to summon money that has left your account, that perhaps was wasted on things you can’t really account for, and you’re worried it may come back to haunt you.

Both your hands are on the planchette, and it begins to move. First it goes to C, and then O, and over to F and back again to F and it does the same thing with E.

It begins to move again and this time it spells clothes, then lunches, then water, gym, late fees etc.

You both look at each other in disbelief, you just can’t believe what the money spirits are telling you. How could they have any impact on your finances.

You thought it would be your mortgage or car loan repayment or weekly shopping or annual insurance costs, not the daily €5 you spend on coffee.

And you might think because it’s such a small expense, it can’t have much of an impact on your bottom line, but the reality is that it can, and probably a whole lot more than you could imagine.

I’ll explain more in a moment when I run the math.

There are small purchases we unconsciously make every day, which can add up to big money, and we don’t realise the impact they can have on our finances.

We don’t put much thought into them, but it’s that unconscious spending over a period of time, especially on things we don’t particularly need or get much enjoyment from, that can prevent us from moving forward with our finances.

For example, let’s assume you buy a couple of coffees a day (and when I refer to coffee, I’m only using it as an example of something which is reasonably inexpensive you purchase most days – it could also be things like bottled water, magazines, newspapers etc.) and they cost €5, over the course of 1 year, the amount you’ll spend is €1,825.

But it’s more than that, because you’re paying for these things from after tax income, so the real cost is more like €9,000, if, you’re paying tax at the higher rate.

Anyway, it’s not that I want you to stop spending your money on these things, of course I don’t, however cutting back on one cup of coffee or one takeaway each week, could have a reasonably big impact on other areas of your finances.

Let me show you.
If you applied the cost of one coffee per day as an overpayment against a €300,000 mortgage over a 30-year term, it would reduce the term by four years saving you €23,041 in interest payments.

Cutting back on that one cup could save you 48 months of mortgage repayments which in this instance amount to c. €60,720.

One less coffee would mean you could earn €30,360 less each year for four years, because your mortgage is repaid in full.

Or you could redirect those daily savings to your retirement account and assuming an annual average return of say 7% over a 30-year period, along with tax relief, you’d add €203,917 to your fund.

There’s a phrase, “If you look after the pennies, the pounds will look after themselves,” which means that if someone takes care not to waste small amounts of money, they will accumulate over time and as you can see, that’s certainly the case when you look at the impact, a small amount can have on the acceleration of mortgage repayments or building up significantly higher retirement savings.

Saving, paying off debt, and spending are different parts of how we interact with money on a daily basis and each require different strategies and need to be managed together.

In an ideal world, we should be saving and investing as often as we are spending but in reality, that can be difficult to achieve without help.

Saving and investing take time and effort and we may not feel the benefit for decades, and it’s that delayed gratification which makes it so hard to stay motivated.

Saving small amounts of money is easy on a once-off basis, but it can be difficult to maintain, particularly if you have no reason to, or you don’t know the impact these small amounts can create.

Spending on the other hand is easy, and small indulgences make us happy and we get immediate satisfaction from them. I like coffee and it’s the one thing I personally wouldn’t cut back on.

And in fairness some people might be just bad cooks and getting takeaways or getting their lunch at work every day, might cost a little bit more than if they made it at home, but the extra cost helps them out, and that’s fine, nothing to feel guilty about or stop doing.

We just need to find that balancing act of spending money on things we like now but not at the expense of our future either. They are not, mutually exclusive, the objective is to do both.

So, it’s important to find out how much and what you’re spending your money on and once you realise, you’re spending €70 on coffee or whatever it is each week, you can determine if that sounds reasonable or not (by the way it costs a coffee company about c. 30 cent for every medium size cup they sell you that costs €4 – the coffee cup they give it to you in, costs them more than the coffee beans)