Words of wisdom shed light on your finances 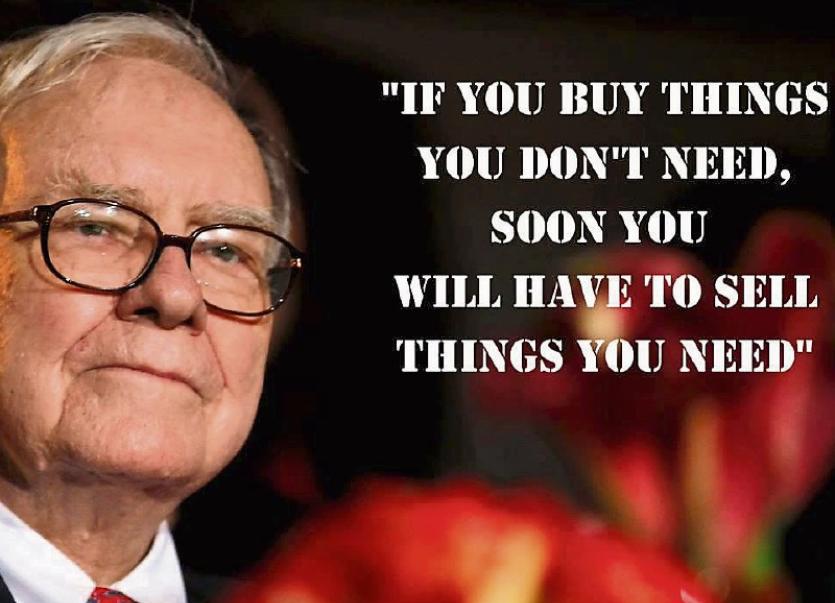 Whenever I write an article, I will often reference a quote relevant to what I am writing about. And I like quotes, because in many ways they can say more in a sentence or two than any article ever could.

You could write all day about the dangers of getting into debt and using credit cards, referencing data, interest rates, trends etc..., but Suze Orman puts it best when she says: “People have got to learn: if they don’t have cookies in the cookie jar, they can’t eat cookies”.

So, I want to share with you this week some of my favourite quotes. While some apply to money, others can apply to your business or your personal life, and you might be surprised to learn who said them in the first place.

“Smart people learn from everything and everyone, average people from their experiences, stupid people already have all the answers” - Socrates

“If Plan A didn’t work, the alphabet has 25 more letters” - Kane Arreo

“Don’t stay in bed, unless you can make money in bed” - George Burns

“There is one weakness in people for which there is no remedy. It is the universal weakness of lack of ambition” - Napoleon Hill

“I’m coaching you to change your life, the difference is your willingness to act” – David Bach

“We must all suffer from one of two pains; the pain of discipline or the pain of regret. The difference is discipline weighs ounces while regret weighs tonnes” - Jim Rohn

“Some people take better care of their pets than they do themselves. Their animals can run like the wind and they can barely make it up a flight of stairs” - Jim Rohn

“If you don’t design your own life plan, chances are you’ll fall into someone else’s plan. And guess what they may have planned for you? Not much” - Jim Rohn

“We only had to solve two problems when we were going to the moon: first, how do we get there; and second, how do we get back. The key was not to leave until we solved both problems” - Neil Armstrong

“A lot of your financial problems are caused by one person: you. Instead of blaming the economy, government or large corporations for your financial situation, you need to focus on what you can change yourself” - Ramit Sethi

“Ignorance, when mixed with greed is the stuff financial disasters are made of” - Mary Buffett

“What’s money? A man is a success if he gets up in the morning and goes to bed at night and in between does what he wants to do” - Bob Dylan

“I often tell young kids, don't ever count yourself out. You'll never know how good you are until you try. Dream the impossible, and go out and make it happen. I walked on the moon, what can't you do?” - Gene Cernan (last man to walk on the moon)

“Unless you’ve taken a look at their books, don’t assume to know anyone’s financial situation except your own. Make your lifestyle and purchasing decisions based on what you can afford, not what everyone else is buying. And instead of coveting your neighbour’s car, try to feel smug about your fat retirement account, and your zero credit card balance” - Jean Chatsky

“When you look at the buying habits that have taken hold in our culture over the past 30 years or so, you can see that we made the decision somewhere along the line to work longer hours so we could acquire more things. We’ve exchanged our leisure time for stuff” - Elaine St James

“The richer you get, the more expensive happiness becomes” - anonymous

And finally, a quote from someone I didn’t know personally but wish I had.

“I always try to remember that praise and a slap on your back is only 6 inches away from a kick up the arse” The late, but very great, Anthony Foley (rip)