Duagh native gets the hump over a claim to fame 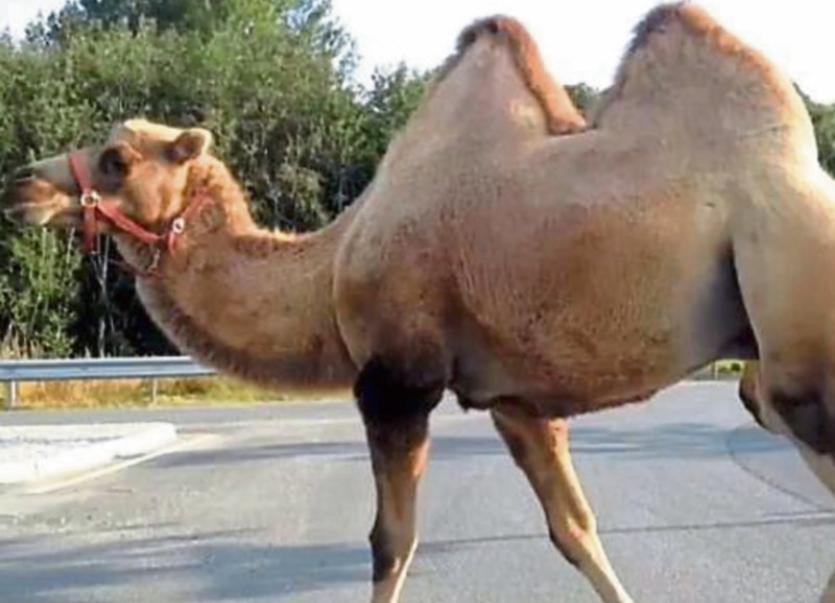 What village in Ireland can claim to have a camel buried in it?

WHAT IS DUAGH famous for? The question was asked recently by a gentleman who was slightly intoxicated and in dire need of a strong argument to spice his alcoholic intake.

I could have answered him and said Duagh is famous for the playwright George Fitzmaurice; for the footballers, Dan McAuliffe, Dermot Dillon and Tom Costelloe, to mention only some; for the cyclist Dermot O’Brien, and for any number of other things, not the least of which is the fact that there is a camel buried in Duagh, which is more than can be said for any other village in Ireland.

In the company was a gentleman from Finuge, which means white graveyard. This man’s mother originally hailed from Duagh, and since the man himself is well known to footballers all over North Kerry and West Limerick, there is no need to mention his name.

Suffice it to say he jumped to his feet when the question was asked. From his pocket he produced a long sheet of green paper and told us that he proposed to read what was written on it.

“John B.,” he said, “you’re a fierce man for Paud Drury but what about Paddy McElligott of Beenaneasbaig in Athea that wrote a poem to Dermot O’Brien’s public house in Duagh, which is called The Star. I have here the poem and I’m now going to read it, with offence to no one, and a thought for the holy souls on this cold April night.

So saying, the Finuge man rose and delivered the poem in rare style. There was no sound as he read save for the occasional gurgle of loose false teeth and the odd sigh of appreciation.

When the rendition was fully complete, there was loud applause.

The other day, Dermot O’Brien himself was kind enough to present me with a copy of The Star. Naturally, I will not be able to present all of it, but I feel all will agree that a few random verses will not be amiss.

Poems about public houses are scarce and it is very rarely indeed that one hears a good word about a publican, although many publicans are saintly men well above reproach.

I daresay virtue is its own reward or as the Latin poet once announced, probitas laudatur et alget, which roughly means that honesty is not a paying proposition and if you’re too honest you will starve, but all this is taking us away from The Star and mine host Dermot O’Brien, inspired while he was on holidays from England during which time he visited Duagh.

There’s a pub in North Kerry,

Its name is The Star,

Few pubs are the equal

Of this famous bar.

There the locals do gather

And the stranger will stop

For a pint of good Guinness

Or else a hot drop.

If I travelled the Kingdom

I could not find a pub

The Star I did visit,

With some friends of mine.

It was holiday time

and nice to be home

To drink in the pub

Owned by Dermot and Joan.

Now I will finish

My pen I will drop,

On my journey from London

At O’Brien’s I will stop.

For no better sportsman

And long may he reign

In his pub in Duagh.

Like I said the foregoing are but a few random verses. There is also mention of Dermot’s wife, Joan and of two people by the names of Janet and Dan who were the poet’s drinking companions on the occasion.

TO PRESS on, however, and to clear the air in respect of the camel which is buried in Duagh, let me say to cynics and sceptics who have already discounted the story, put your monies where your mouths are.

In the year of Our Lord nineteen hundred and six a man by the name of John Hanratty visited Listowel with a small circus.

The menagerie of this circus consisted of a baboon and a camel. There were a number of Shetland ponies and a few piebald horses.

There was a trapeze artist and his wife and there was a knife-thrower whose name was Dan Fandango.

Hanratty was a man of advanced years and these same years were advanced further still by his love of spirits and stout.

It was known to all except Hanratty that Fandango, the knife-thrower, was enamoured of Hanratty’s wife and vice versa.

To make a long story short, Hanratty went bankrupt in Listowel. After a four-day booze his wife disappeared with Dan Fandango. The trapeze artists, man and wife, got jobs in the Arms Hotel in Listowel, he as a scullion and she as a waitress.

Hanratty went off the booze upon hearing of his wife’s departure and died almost at once. This is where Duagh comes into the picture. After the demise of Hanratty, the baboon and the camel were left to fend for themselves.

The baboon, despite the unwelcome attentions of local urchins and visiting farmers’ boys, fared quite well and the townspeople were somewhat proud of him.

As regards the camel, the old Arabic saying was proved true, Nib sarraya nib sabat, which in plain English means, “None but his mother loves the camel.”

After a spell in Gurtenard Wood near Listowel where the poor beast was set upon by a small herd of asses he left the area and headed in the general direction of Duagh where he was treated with much kindness.

I once erroneously reported that he died in Duagh from starvation. This is not so. He died of old age and was buried on the left hand side of the Church Road as you leave the village.

I’m sure that other villages and even towns have unique aspects which should be recorded. I would be glad to hear of them. There are two reasons why I would ask readers to search their memories for unusual tales of their localities

The first reason is that there is a likelihood that worthwhile and bizarre stories might be lost forever and the second reasons is that my job would be a lot easier.

AN ATHEA reader writes asking if the following is a Guinness record. A certain tradesman once lived in Athea. I have his name and exact trade, but for good reasons I cannot publish them.

This tradesman was married with a houseful of children. Every day of his life he drank from fifteen to twenty-six pints of porter. He died at the age of seventy-five year and, accordingly to the latest calculations, one pint of porter weighing 1 lb 2 ozs, it is estimated that he drank one hundred and eleven tons of porter in his lifetime. Is it a record? Over to you, dear readers.

AND NOW a letter from New Zealand. It’s from Ena McGrath nee Broderick. There is a newspaper clipping enclosed which reads as follows: “Births … Athea … On January 31, 1973, at Napier, to Val and Brian – a son, Nicholas. Both well.”

Writes Ena McGrath: “This birth notice which I enclose appeared in our local paper, the Hawkes Bay Herald Tribune. I was so excited when I saw it, especially fourteen thousand miles away from my hometown of Athea. I am sure lots of Athea people would be interested.”

Thank you, Ena. It is most interesting to relate that when Tom Clifford, the great Young Munster forward, was touring New Zealand with the Lions, he spent a morning walking round the main streets of Hawkes Bay with a number of his teammates.

The most astonishing aspect of that brief sojourn was that while Tom was ambling aimlessly along, he was suddenly accosted by an attractive woman.

All she said was: “How’s Tom? How are they all in Athea?”

Before Tom Clifford had time to reply, she was gone. I wonder would she and Ena McGrath be the same woman, or are there more Athea people in Hawkes Bay than we think?

DURING THE recent election campaign, a candidate was addressing a gathering in an effort to solicit votes. One heckler kept shouting: “Where did you get your farm?”

The speaker endured it for as long as he could but finally he answered: “From the same place you got your ugly mug, my father.”

There was no more heckling.

The late, great John B Keane was a Leader columnist for more than 30 years. This column first appeared in our edition of April 14 1973