Famous boar was a big hit with lovelorn sows 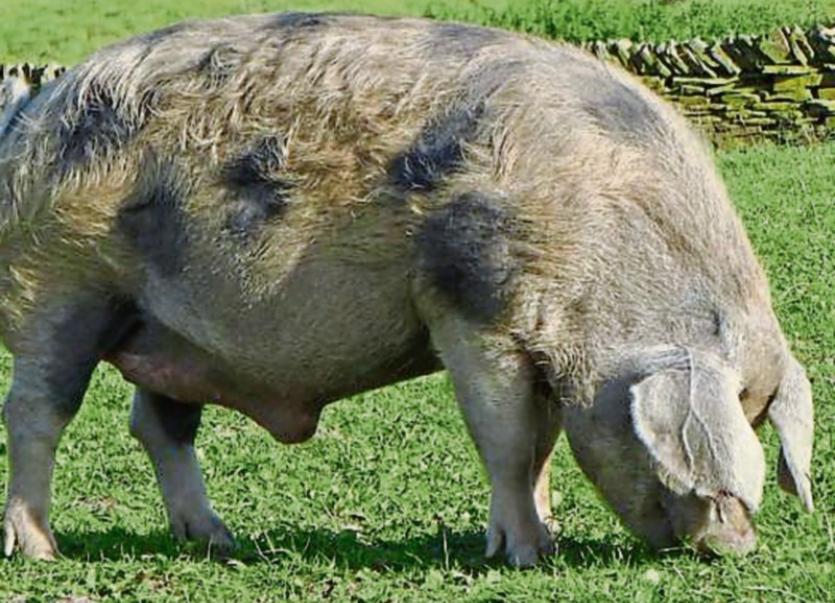 DURING the Pattern Day in Ballybunion I met a man in the Marine Hotel whose father had been killed by a boar. I presumed that the dead man had been abroad at the time, somewhere in South America where the peccary or wild pig still runs wild or maybe in Afghanistan where fierce boars still abound in the remote uplands.

Imagine my surprise when I was told that the foul deed was perpetrated between Rathkeale and Newcastle and that the boar in question was a Department boar.

“Weep not for the loss of your father,” said John Joe Daly who was in the company at the time, “but rather throw the drop of drink back in you and let yourself go the way of the merry throng.”

The man whose father was killed by the boar took heart at this and insisted on buying a round of drinks.

As the evening wore on the drowsy tide of talk ebbed and flowed and in the background a piano tinkled. There was the musical clinking of whiskey and porter glasses and above all an air of great humour prevailed.

“I HAD a boar once,” said a man who sat aloof on the fringe of the gathering, “and the bonhams he sired were the talk of the countryside. You will all surely have heard the expression: high and mighty like the Kilflynn bonhams.”

We all nodded and the man on the fringe proceeded with his tale.

“This boar,”said he, “was beloved of every sow from the headwaters of the Brick River to the silver mouth of the Cashen. A sow that came to him once never wanted to tangle with any other boar. What harm but he was no Department boar, just an ordinary John Smith who was sired himself by a totally unknown and unpedigreed masculine swine from a spot called Lenamore near the village of Ballylongford.”

“I heard of him,” said a man who was idly swirling porter around the bottom of his glass, “there was sows died of the heartbreak after him.”

“Before we pass on from the subject of boars,” said Mick Carey, who had earlier unobtrusively joined the company as an interested listener, “let me tell the story of the lovelorn sow.” There was a murmur of assent.

“Once up a time,” said Carey, “there was a widow who lived on a small farm with her only son. The son was young and it is a known fact that you cannot put an old head on young shoulders. Consequently the son was not as well up as he might be on matters relating to the farm.

The farm supported ten milch cows, a pony, an ass and a sow. One day the mother pointed out to the son that the sow had come into her time and would have to be taken to the boar. Now the boar lived nearly a mile away on a busy road and anybody who has ever tried to guide a sow over a mile of busy roadway will know that it is a very demanding job indeed.

The son thought of a number. He managed to get the sow into a wheelbarrow so off with him to the residence of the boar. After the boar had performed his task the farmer who owned him took the widow’s son aside and told him that if the sow failed to keep he was to bring her back.

The boar would perform secondly free of charge and if necessary keep on performing until the sow was in the family way.

The widow’s son was somewhat perturbed and explained his position to the farmer.

“A good question,” said the farmer, “and one which I will now answer. In a few days take stock of your sow. If she’ll be rolling around and kicking her legs up in the air it means she must pay a second visit to the boar but if she’s dreary, down and out and a bit shook-looking in appearance there will be no need for a return visit.”

Satisfied, the son went home and informed his mother that the boar had done his duty. Life went on. Hens laid and cocks crowed. Then after the space of a week the son rose up one morning and requested his mother to take stock of the sow, to see which of the symptoms described by the farmer were affecting her. The mother went out and after a period came back.

“She’s sitting inside in the wheelbarrow,” said the mother, “with a big smile on her face.”

TO OOLA bachelor, I have passed on your letter to the lady in question. I’m afraid I cannot put you in touch with any others. Since you have given me leave to quote from your letter to me I will now quote what I believe to be a very relevant part.

“Dear Mr Keane, Some years ago I fell in love with a girl three miles from Oola, on the Limerick side, which is where all the good-looking girls come from.

“I started to meet her regularly. She was the daughter of a widow. She has other sisters and when you see them at Mass you wouldn’t know but the mother was one of the sisters. She said to me one night, the widow, that she was as good as any of the daughters and she had more strings to her fiddle than any of them. I should have thought of Big Maggie. Didn’t she come around me and the next thing I know I was doing a line with her.

“Then the daughter started to do a line with a teacher. Me and the widow, the four of us, used to go around to the singing pubs.

“In Barrett’s in Glin the daughter announced that the teacher had proposed to her and they would set a date for the wedding. They can read this. I don’t care.

“The teacher said to me: ‘why don’t you make a double wedding’? I thought about it and during the next night at Sheahan’s I asked her if she would ever think of settling down.

“’Faith you’re right. I would if I was asked maybe depending on whom’. What of me? said I.

“‘I’ll have to see,’ she announced. After the daughter married her teacher I saw no more of the widow and she failed to turn up for our next date. I wrote and got no reply. I thought maybe the postman was making a mistake so I called to the house.

“‘What do you want,’ said she. I asked her about our date and she told me go or she would get the brush to me. Is this nice or not?

“She led me on to take me away from the daughter. I am only a labouring man and so she thought I was not good enough. She wanted the teacher for the daughter.

“From what I hear there is trouble in the camp too for all their cuteness. I hear there is not a moment’s peace between them. Now I will watch and see will the widow start a new line as soon as some new chap starts to court one of the other daughters. Only I’m sure if he’s a working man like me.”

The late, great John B Keane was a Leader columnist for more than 30 years. This column first appeared in our edition of September 2 1972