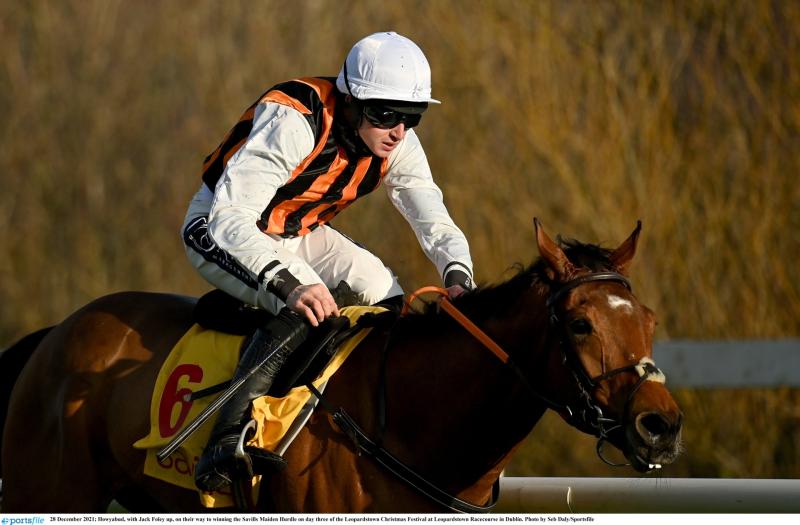 The story of Jack Foley’s young career so far is one of seizing opportunities.

Those chances are hard-earned in horse racing and when you get them you better take them.

Jack’s first amateur win came with Rock Chica in Tipperary and was the catalyst for the jockey turning professional soon after.

“I was only back riding out for Tom (Mullins) a couple weeks and I had two rides for him in Punchestown. One of them was the mare Rock Chica and I went on to ride her two weeks later in Tipperary and she got me my first win under rules. She ran out a very good winner on the day and it was brilliant to ride my first and for Tom and Helen,” Jack described.

Jack arrived in Punchestown in late 2020 having only ridden his one winner in the amateurs just a month prior and with just a couple of professional spins under his belt.

“Tom (Mullins) said to me when I was an amateur he’d give me a start and a good start if I worked hard enough. After Rock Chica he suggested that I turn professional and he said we will give it a proper go.”

Jack kicked off a November Sunday’s racing with a ride on Chavi Artist and brought home a Guinness Handicap Hurdle win for Tom Mullins.

“Chavi Artist was a favourite horse in the yard and he was great that day. Tom and David (Mullins) were good to me that day because David could have easily ridden him because he (Chavi Artist) had been running well all season and David had been riding him,” Jack explained. “Between the two of them they agreed it would be a good one for me and I would be able to claim seven (pounds) which would be good for the horse too.”

After a brilliant first professional win in the 12:05 race, Jack had some time to kill before Grand Partner turned out for the 15:25. The congratulatory texts poured in but he was determined to stay in the zone for the next one. When the time finally did come Tom had very simple instructions for Jack on the back of 33/1 shot Grand Partner: “Go out and enjoy yourself on this lad … now if you can win on him, do that as well,” Tom grinned.

Ten minutes later Jack and Grand Partner were trotting back into the number one spot and Jack was already repaying the faith shown in him by Tom Mullins and he credits the Kilkenny trainer as the biggest influence on his career so far.

“When I first started riding out properly it was at Tom Mullins’. I was 13, I always got on very well with David when I was showjumping and we did cross country so that's how I ended up riding out for his father,” Jack said.

“Tom was a great mentor, a great teacher. Who knows how it would have all panned out without the great start he gave me. He was willing to teach me, he didn't just let me off to ride the horse. Even after races we would look back on them and analyse them properly and we still do. He has been the biggest part of it all and he has kept me grounded on top of everything else.”

Jack has kicked on from there and now splits his time between two Mullins’ yards Three days a week at Tom’s and three down with his brother, racing legend Willie Mullins.

But it’s not as simple as asking for a way in from the siblings, Jack was put on Willie’s radar when a spare ride came up in Roscommon in a conditional jockeys race.

“I was fortunate enough to get the ride on it because I had never been up to Willie’s yard before that. It was a big thing to be riding for Willie’s Mullins at that stage and to get the win was great,” Jack described.

“I was lucky with him (Willie Mullins), the first two rides I had with him were winners and I started riding out there around last August. He has been very good to me and given me lots of rides in the big handicaps and he gave me a spin in the Grade 1 Christmas hurdle in Leopardstown.”

This season has been a huge jump in experience for Jack. Compared to last year with just below 40 rides, Jack has had a spin on 355 horses in the 2021/22 season so far.

“This season has been unbelievable, I have ridden a raft of winners. It is 43 so far and compared to last year I only had a couple of wins and way less rides. I mainly rode for Tom last season and he wanted me to learn and do it properly as he saw it and I think that has stood to me.

“But now I have had hundreds of rides this year so far and it has been brilliant. I think that includes winners for 23 different trainers this year.”

Jack is currently linked to the legendary Mullins horse racing family but he has a racing lineage of his own. Jack’s uncle Tom Foley trained Irish thoroughbred Danoli, regarded as the most popular horse in Ireland in the 1990s. The beloved horse was regarded as "the People's Champion”.

So while it is too early to do any sort of career retrospective on Jack Foley for a man in his early 20s but rather instead acknowledge someone with exceptional potential and plenty of years to fulfil it.