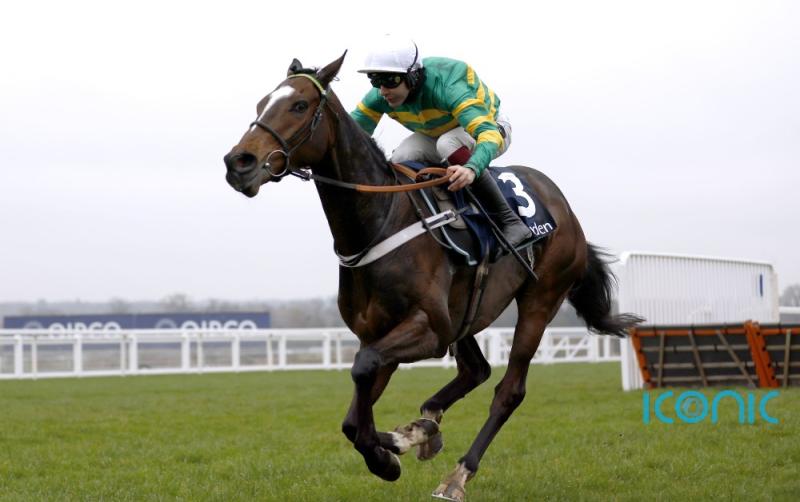 Bought for the princely sum of £570,000 by JP McManus having won his sole point-to-point and sent to Nicky Henderson, Douvan’s full-brother promises to live up to the price tag and more based on this evidence.

While only five took their chance, the two-mile contest was widely regarded as being the best race of its type so far this season.

His opponents in the Grade Two affair included Paul Nicholls’ unbeaten Knappers Hill, Nigel Twiston-Davies’ Grade Two winner I Like To Move It, Irish raider Colonel Mustard, who has been second in a Grade One, and Dan Skelton’s smart mare Elle Est Belle.

As none of his rivals wanted to give Jonbon – who has been very keen in the past – a lead, Aidan Coleman soon found himself in front setting a sedate pace after the field barely broke out of a trot in the early stages.

Coleman began to really quicken the pace at halfway and by the time the field turned into the straight he had most of his rivals in trouble.

Having jumped the second-last safely Coleman gave the even-money favourite a shake of the reins and he quickened and flew the last on his way to a two-and-three-quarter-length success over Colonel Mustard.

The bookmakers were impressed and he is now the general 5-2 favourite for the Supreme Novices’ Hurdle at Cheltenham in March.

Henderson said: “He travelled very smoothly today, usually he sweats quite a bit, but he didn’t sweat. He is getting the hang of it. I think they were playing games at the start, and set off as if they were trying to make a gallop to get him to do what he did, which is what we did.

“He said ‘sod it, I’m going on’, and that is what Aidan said – you can do anything with him. I would prefer to ride him the other way, but he can do anything you want. He is extraordinarily professional for a horse that has had so little experience, but he had a very good education in Ireland before he came to us.

“To be fair, life has been pretty simple and very straightforward since his first run at Newbury. He is getting more relaxed in life. He was good at the start. He was a cool dude all the way around. It is funny, he had them off the bridle a long way out off no pace as Aidan said his cruising speed is so high.

“He hasn’t seen a hurdle since Newbury. Why? I’m not going to teach him anything. He doesn’t need me at all, actually.

“I would think only one run. Where or when I’m not going to speculate. That is tacky old ground today.

“There is nothing wrong with the ground, but when it gets tacky here it can be hard work for one or two. It didn’t bother him. I don’t think he is ground dependent in any way.

“We have a lovely bunch of novices’ this season, but I would think one run for him.

“His life is in front of him not behind him, but we are getting through the nervous nineties – that was what today was. That was obviously going to be a test.”

Coleman said of the start to the race: “It is what it is, no one wanted to make it.

“He is a very straightforward horse. He went down to the start and to the first asleep, it was a farce. But I thought I should just keep it simple. He was the best horse in the race, so let him go. He is very good horse!”

She said: “He has run a huge race. It was a ridiculous pace. We said we didn’t want to go and make it and we shouldn’t have. He tried so hard. Connor (Orr) got that nice run up the inner and short-circuited them. How can you complain. That is a great run, it has proved he is in the top drawer of the best two-mile novices.

“We have not been annihilated. I am really proud of him – he has really tried his heart out.”