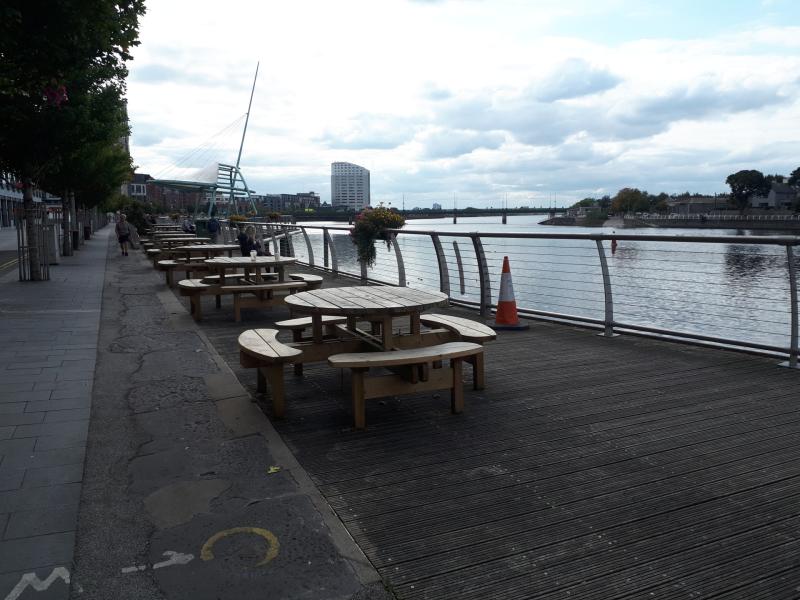 THE OUTDOOR seating area at Harvey's Quay in Limerick should be closed off during the night-time.

That's the view of local TD Willie O'Dea and councillor Catherine Slattery who have called on the council to introduce restrictions amid what they feel has been an upsurge in anti-social behaviour on the riverside.

At this month's metropolitan meeting, Cllr Slattery asked officials if the seating could be chained up or cleared away after a set hour.

In a written response from planning director Nuala Gallagher, she was told that there are no plans to restrict hours on the seating - which was introduced during the Covid-19 pandemic - and anyone who is experiencing anti-social behaviour should contact the gardai.

But Cllr Slattery has accused the local authority of a "cop-out", and Mr O'Dea said: "Council created the problem by putting the seats there, so they must take some ownership of the problem."

He said he has come across people "smoking dope" on the benches at night-time, "and you can't talk to them."

"There are a number of retired people and families in Harvey's Quay, and they've all chosen to live in the city. They lived very happy and contentedly until two years ago when the council decided to put those tables out along the boardwalk. The noise on those tables at night, particularly after midnight constitute a very serious disturbance for these families. If you walk a few yards up the road, the pub has tables outside, but they take them in at night. So there's no issue with them. I've contacted council about this, and they've said it's a garda matter," said Mr O'Dea.

Following the answer from Ms Gallagher, it's now likely councillor Slattery will bring a motion to the next metropolitan meeting in a bid to force the local authority's hand.

Mr O'Dea argued that if the council is not able, or prepared to remove the tables, or chain them up at night-time, members could introduce by-laws which will prevent people occupying them after midnight.

Cllr Slattery said: "We have to remember there are people living in apartments all around the city. While outdoor seating in the summer was very successful, and it is great to see people outside enjoying themselves, we cannot forget there are families and people living in these apartments. I'm all for the outdoor seating, but what I'm not for is residents in areas being tormented and kept awake half the night when they've work and children with school to go to."