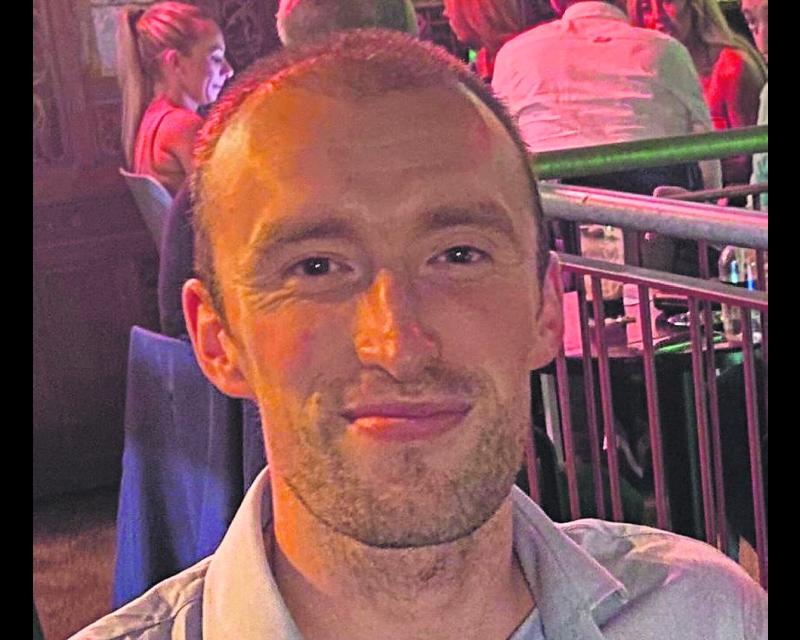 GARDAI in Kildare are putting all the resources of a homicide investigation into arresting the men who brutally assaulted a young Kilmallock man and left him for dead on the side of a street in Monasterevin.

Dylan McCarthy, aged 29, from Kilmallock, passed away in hospital on Monday following the vicious attack by a number of men in the early hours of Sunday morning.

It has been reported that he was punched, fell under the onslaught, and was kicked in the head. A post mortem will determine the course of the investigation.

Dylan had travelled to Monasterevin with his family to visit his sister Orla who recently had a baby. Dylan and his dad Eamonn, aged in his 50s, were among those out socialising to celebrate the occasion. It is not known how a row erupted at a pub shortly after midnight but one said: “Dylan wouldn’t hurt a fly and his father is the same”.

Eamonn was also assaulted. It is understood he must undergo surgery for facial injuries but will be temporarily discharged from hospital to attend his only son’s funeral. No arrangements had been announced at the time of going to press.

A friend said Dylan was “a quiet, laid back and genuinely lovely lad”.

Cathaoirleach of the Cappamore-Kilmallock area, Cllr John Egan asked, “In what kind of society do good, respectable people go out for the night and end up being viciously attacked?”

Local councillor PJ Carey described it as a “barbaric attack” and said the town of Kilmallock is “numb and bereft”.

Fellow councillor, Mike Donegan said: “The whole of Kilmallock is there to support the family in the coming days, weeks, months.”

Dylan’s mum Marita is the moderator of the Kilmallock Church Facebook page which has over 11,000 followers and which brought so much succour during Covid. The bereft mum has responded to every one of the hundreds of messages of condolence on the page following Dylan’s death. That goodness, despite her immense grief and loss, is not a surprise to Fr Chris O’Donnell. He shared a poignant story which displays Marita and the McCarthy family’s standing in the community.

“Marita would regularly – and this is what really hit me – text me with requests sent into the Facebook page for prayers. On Sunday morning, she sent a message to ‘pray for my son’. I was waiting for a second text to say it was from Mary in Roscommon or wherever but it never came. For a woman who is so dutiful, kind and caring in relaying requests for prayers – and I am sure praying for them herself – now it is our turn to hold her in our prayers,” said Fr O’Donnell.

It is with the heaviest of hearts that we at Kilmallock Gaa pass on our heartfelt sympathies to the family and friends of Dylan McCarthy.
Dylan played underage hurling and football at underage level and also played u21 and Junior hurling . He was a huge addition to any team and a pic.twitter.com/dpynra1Uq4

He said the church community, Kilmallock GAA Club, community council, every organisation in the parish is “reeling from what has happened”. “They have come forward to respond and support the family both visibly and in other ways to show they are coming home to a community that is caring for them,” said Fr O’Donnell.

He said there is a “cloud of awful sadness over the town”.

“Everybody is heartbroken. The family are the quietest, nicest people. People would only speak good of them. It is every family's nightmare. There is nothing but prayers and love for them. They were just good, honest people in the wrong place at the wrong time and now we are left with this awful sense of the tragic nature of life and violence and repercussions,” said Fr O'Donnell.

“The ripples are great. I am very conscious of those who have gone through similar tragedies and it might not have been tragic but those who have lost a son or daughter and all their pain comes rushing back,” said Fr O’Donnell.