Absent friends are honoured at launch of Cappamore Show 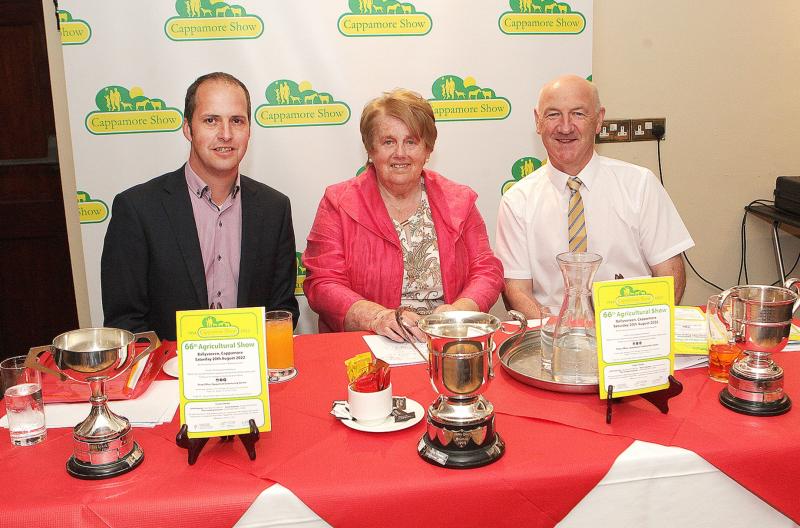 IT WAS lovely to see familiar faces at the Cappamore Show launch that you haven’t seen since 2019 but it was also tinged with sadness at those not in Hayes’ function room.

It was very strange not seeing Paddy Ryan “Luke” at the top table with chairperson Marie Hayes and treasurer PJ Blackwell.

“We really miss them and offer our deepest sympathies to their families. We will do our best to have a show that they would be proud of and in their honour,” said Marie.

It is not an easy job to follow a legend but John Hassett has taken up the role as secretary. He spoke of volunteerism, community and good governance and how Paddy epitomised all three.

“What can I say, he is a notable absence - I think we all feel it. Paddy was a strong advocate for community development, the farming community and Irish shows.

He was known up and down the country for promoting the virtues of rural Ireland and Irish shows. He could articulate his point of view at all times professionally but sensitively. He was a wordsmith,” said John, who was more familiar with Paddy as a friend than a show member.

“You could meet Paddy mid-morning. He would have his morning farm work done, been to the village for the paper, consumed the contents of the paper and be able to relay the news of the world. If the key of the car / tractor was turned off, and the box of cigarettes came out you were there for an hour. I miss those chats.

“Tonight we think of Paddy and his daughter Helen. We pray for them. We pray for Peggy, Sean and Ger and their families for strength. We thank them for sharing Paddy with us,” said John.

He reflected on how much has changed since the last attendees left the field on show day in 2019.

“We have seen a worldwide pandemic, supply chain shortage, war in Europe, an energy crisis, we were introduced to Zoom and Limerick have won three in-a-row All-Irelands,” said John. His last remark got a warm round of applause.

In early February, a meeting was organised in the community centre to plan for the year and to see if they would go ahead with the show.

“Almost 50 members were in attendance and it was unanimous that the show would go ahead,” said John. It takes place on Saturday, August 20 in Ballyvoreen.

In their speeches, Marie and PJ stressed that they wouldn’t be able to continue with the show only for the support and sponsorship they get.

“We are very glad in these uncertain times that all our sponsors are back with us and we welcome new sponsors. It is very heartening to see the sponsors giving us the support that we need to run the show,” they said.

John said a huge amount of work has already been done and more will be completed by the various sections of the show in the next two and half weeks.

“It is a team effort. Those who have no titles do a huge amount of unseen, sometimes thankless work. I thank you,” said John. The secretary concluded by saying the show field is in Ballyvoreen which in Irish means “the place of the many small roads”.