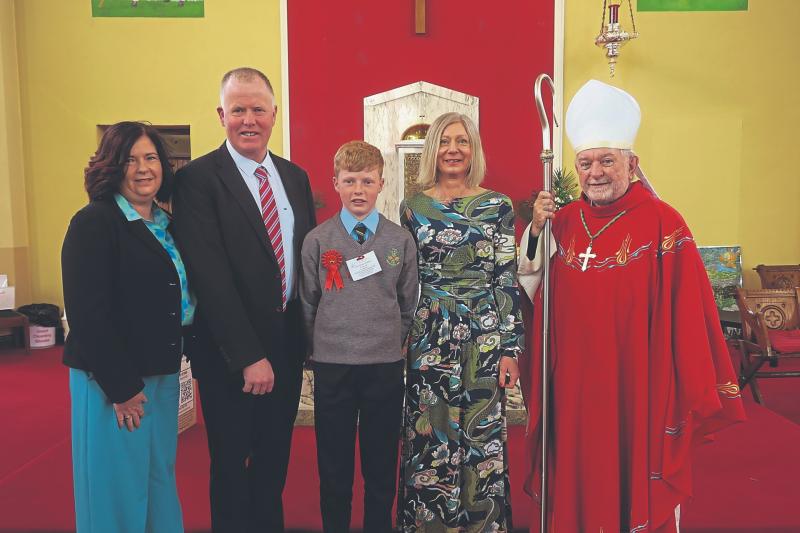 Archbishop Kieran O’Reilly with Diarmuid Crowe and family after his confirmation in Doon this year. Right, the late Fr Loughlin Brennan, parish priest of Murroe-Boher. Fr Thomas Dunne is his successor

THE STARK reality regarding the shortage of and age profile of priests has been disclosed by Archbishop Kieran O’Reilly.

In a letter read out at Masses in all parishes in the Cashel & Emly archdiocese – which includes large swathes of east and south east Limerick – Archbishop O’Reilly said, “Change is coming soon in how we organise parish life.”

“These changes will concern all parishes and the way in which pastoral ministry is undertaken in the future. Future organisation will call for the formation of different pastoral units - encompassing several parishes functioning together to serve the pastoral needs of their communities.

“The organisation of these units will involve priests and lay people working together in a spirit of co-responsibility. The formation of parish pastoral teams in parishes, now underway, is central to the implementation of our plans for the future,” wrote Archbishop O’Reilly.

One important aspect of this development will be the rearranging of Mass times, in particular Sunday Mass times. In the new arrangements the celebration of Masses will be organised in co-ordination with other parishes.

It is planned that the archdiocese will inaugurate these new pastoral units at the beginning of Advent 2022 which is November 27.

The changes are, of course, down to the age profile and shortage of priests.

“Currently, we are blessed with 68 diocesan priests ministering in the diocese including associate priests, they are also assisted by other priests living in the diocese. It is clear that this staffing level will not continue.

“The current average age of priests in the diocese is 67 years. It is a matter of importance to me and to you that all our priests, whatever their age, are valued and cared for,” wrote Archbishop O’Reilly.

Presently, the diocese has only one candidate for the priesthood in the major seminary. The Archbishop of Cashel & Emly concludes by saying the model of church that we have known is being replaced by a new reality.

“In future, it will be essential to have lay people more involved and engaged with their priests and with one another in building witnessing communities of faith.”

Fr Thomas Dunne, CC, Boherlahan and Dualla will be the new parish priest of Murroe and Boher following the unexpected passing of Fr Loughlin Brennan in June.