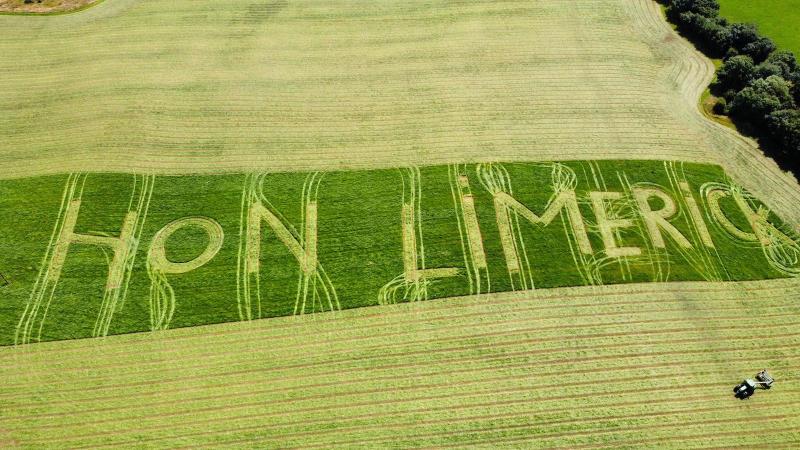 A cut above: Patrickswell dairy farmer Paul Reidy got creative when he cut silage on the eve of the All-Ireland final. Friend, Cillian Cliffe captured it perfectly with his drone

IF YOU tested a soil sample in Patrickswell it would be positive for a different type of P and K – point taking and killer instinct.

“I was getting the silage out of the way before the match. I said the weather was fine so we would knock that field. It was going to be a grand day so let it down and wilt away,” said Paul, who got creative when he went cutting silage on the eve of the All-Ireland.

His canvas was a 30-acre field at Kilcolman.

“A friend of mine Cillian Cliffe, from Ballybrown, has a drone. I said I would give it a go and if it looked any way good we can take a picture of it. And if it didn’t I can cut it and no one will know the difference. I did it in about 20 or 30 minutes,” said Paul, who is somewhat controversial as he lives in Patrickswell but hurls with Ballybrown!

The 29-year-old didn’t painstakingly measure it all out; remarkably he cut it all by eye. It’s not his first rodeo though as they cut all their own silage and he has experience working with contractors.

The next day Paul was in the upper tier of the Cusack. “It didn’t bother me where I was sitting – it was just to be up there to see a piece of history in the making. I never got to go to the last two so I made it my business to go this time,” said Paul, who would have hurled with and against Diarmaid, Aaron, Cian and Colin. It is easier to play with them!

“Every year they are bringing something new to the table. They have all the physical work done but the final part is the mentality and when you get to the big day of the All-Ireland they have to be mentally right for that,” said Paul.

When the pressure came on from Kilkenny in the second half Limerick didn’t wilt unlike Paul’s silage.